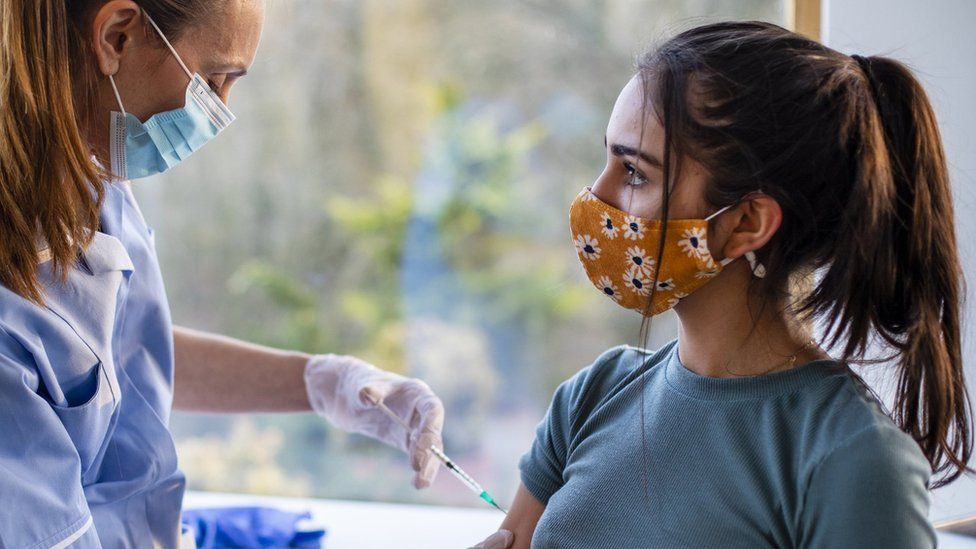 Children over 12 who are at higher risk of getting ill if they catch Covid will be offered the jab, the vaccines minister Nadhim Zahawi has confirmed.

But the vast majority of children in the UK, who are low risk, will not be offered the vaccine for now.

However, some healthy children over 12 who live with other vulnerable people can have the vaccine, as well as those on the cusp of turning 18.

It means, overall, around 370,000 children will be eligible.

The UK is in marked contrast with other countries – such as the US and Canada – which have mass vaccinated children aged 12 to 17.

The decision is based on recommendations from the UK’s vaccines experts – the Joint Committee on Vaccination and Immunisation (JCVI). Ministers in England, Wales, Scotland and Northern Ireland each then approve the plans.

Those newly eligible include vulnerable children, aged 12 to 15, with:

Vulnerable 16 and 17-year-olds were already able to get the vaccine.

Those aged 12 to 17 will also be offered a vaccine if they live with somebody with a weak immune system.

Teenagers within three months of their 18th birthday will be offered the jab – the aim is to protect people leaving school before they start work or university.

Mr Zahawi said the NHS had been asked to offer the vaccine as soon as possible and that eligible children would be contacted by the health service.

They will all be offered the Pfizer-BioNTech vaccine because it is the only one approved for use in children aged 12 to 17 in the UK.

The European Medicines Agency says heart inflammation following the vaccine is a very rare side effect which can be treated with rest and anti-inflammatory drugs such as ibuprofen.

Do you have any questions about masks, rule changes and vaccinations?

Prof Anthony Harnden, the deputy chairman of the JCVI, said: “The primary aim of the vaccination programme has always been to prevent hospitalisations and deaths.

“Based on the fact that previously well children, if they do get Covid-19, are likely to have a very mild form of the disease, the health benefits of vaccinating them are small.”

Fewer than 30 children have died with Covid in the UK.

The JCVI also says the benefit of vaccinating children to prevent the virus spreading to older age groups is unclear with so many vulnerable adults already fully immunised.

Nor is there good evidence that giving children the vaccine could prevent them getting long Covid, says the JCVI.

But Prof Lawrence Young, a virologist Warwick Medical School, said: “This is a worrying decision at a time when we are now relying on vaccination and personal responsibility, as opposed to mandated restrictions, to get us through the pandemic.

“While infected children mostly get mild symptoms, Covid-19 causes more deaths and hospitalisations in children compared to other viral diseases which have been deemed severe enough to warrant vaccination for example flu.”