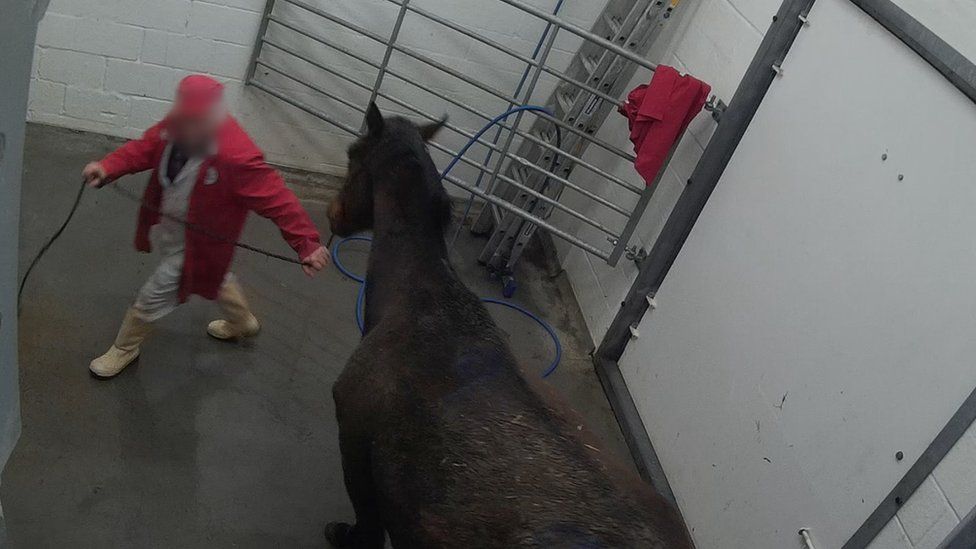 Thousands of racehorses are being sent to slaughterhouses in Britain and Ireland, a BBC Panorama investigation has found.

Some of the slaughtered animals were once owned and trained by some of the biggest names in racing.

Covert recording also showed how rules designed to protect horses from a cruel death appear to be regularly ignored at one of the UK’s biggest abattoirs.

The abattoir told the BBC it did not accept any form of animal abuse.

One expert described the covert footage, from cameras installed by the campaign group Animal Aid, as evidence of clear breaches of the regulations.

Last February, a picture of top trainer Gordon Elliott sitting on a dead horse sent shockwaves through the world of racing and beyond.

Elliott, who has trained three winners of the Grand National, was roundly condemned, and suspended from the sport until 9 September this year.

The incident caused uproar, but it also highlighted the fate of many horses in the industry who die while racing, in training or in abattoirs.

Freedom of information requests revealed that 4,000 former racehorses were slaughtered in Britain and Ireland since the beginning of 2019. Most, but not all, were trained in Ireland.

Animal Aid, which has long campaigned for an end to horse racing, set up covert cameras at Drury and Sons, an abattoir in England which has a licence to kill horses.

“When we looked at the footage we were absolutely astounded at the sheer volume of young thoroughbreds,” said Animal Aid spokesman Dene Stansall.

It captured dozens of former racehorses being slaughtered, the majority of them from Ireland and the majority young.

Some of the horses shot in the abattoir had previous illustrious racing careers, winning thousands of pounds.

Three of them had been trained by Gordon Elliott at his state-of-the-art stables in County Meath, Ireland.

He told Panorama none of the three animals were sent to the abattoir by him.

The horses had retired from racing due to injury, he said, and were not under his care when they were killed.

Elliott said two of the horses were sent to a horse dealer “to be rehomed if possible, and if not, to be humanely euthanised” in line with the regulations.

He said he gave the third horse to another rider as requested by its owner.

And he said the first time he learned of their fate was when Panorama contacted him.

Elliott said he has ensured the appropriate and proper treatment and welfare of animals that have been in his possession and has rehomed a substantial number of them.

Watch Panorama: The Dark Side of Horse Racing, on BBC One on Monday at 20:30 BST, or later on BBC iPlayer.

Animal Aid’s cameras also captured what appear to be breaches of rules designed to protect animals from unnecessary cruelty.

The regulations say horses should not be killed in sight of each other.

The footage recorded horses being shot together 26 times over the four days of filming.

Prof Daniel Mills, a veterinary behavioural specialist from the University of Lincoln, who has seen the footage, said: “A gunshot going off is going to be startling, seeing another horse suddenly drop, these are all going to be very distressing for a horse in this situation.”

That is not the only breach of the rules.

The regulations also say every effort should be made to ensure a rapid death. But the footage showed that sometimes the death was far from instant.

On 91 occasions the cameras recorded a slaughterman shooting horses, not close up, but from a distance.

Reviewing the footage of one such killing, Prof Mills said: “It doesn’t look like the horse is even stunned. You can see it’s turning its head. It seems to have got some control actually over its head and neck.

“Taking a shot from a distance at a horse, to me, that’s completely out of order. If you’re going to euthanise a horse, you’ve got to get a bullet in the right place.

“If that’s representative of how they’re being killed, then we’ve got a really serious problem.”

The abattoir, Drury and Sons, told Panorama that they “take great care to maintain high welfare conditions and do not accept any form of animal abuse”.

They said all horses are “humanely destroyed” and that on occasions where issues do occur, they take ”swift action to review and rectify” them.

Some of the racehorses killed while Animal Aid cameras were filming had been transported from Ireland, travelling more than 350 miles (560km) by road and sea.

Some animals were said to be carrying career-ending injuries.

Veterinary expert Dr Hannah Donovan, who reviewed the footage, said: “[Travelling] 350 miles potentially carrying an injury is not a humane process. This is unnecessary suffering.”

Dr Donovan said: “The bottom line is horses, if they are to be euthanised, could and should be euthanised at home. Simple as that.”

Prof Mills said the racing authorities’ own guidelines clearly set out what should happen to horses when their racing career ends.

“The industry’s own regulations recommend that you should make provision for all the animals that you’re responsible for,” he said.

Horse Racing Ireland, the governing body for racing in Ireland, said it placed great importance on the welfare of the people and horses in the industry.

The British Horseracing Authority said it has demonstrated “a clear commitment to improving already high standards of care for racehorses… before, during and after racing”.

It said it would “consider carefully any issues raised” by the Panorama programme.

Dene Stansall of Animal Aid said: “I can understand why people are attracted to racing, because I was attracted to it myself.

“[But] because of the poor welfare record, the number of horses dying and being killed in slaughterhouses, I can no longer support that – and I think a lot of the public would feel the same way.”

Panorama: The Dark Side of Horse Racing, is on BBC One on Monday at 20:30 BST, or watch later on BBC iPlayer.