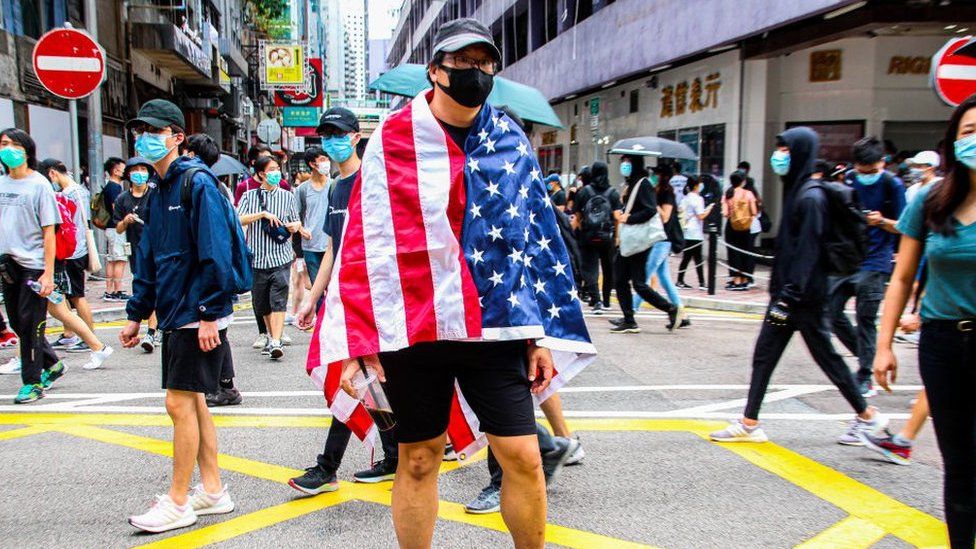 The US has issued a warning to firms over the risks of doing business in Hong Kong after China imposed a new national security law there last year.

A new business advisory tells multinational firms that they are subject to the laws and that their people could be arrested under them.

Other risks may include having to surrender data to Chinese authorities.

President Biden said on Thursday that “the situation in Hong Kong is deteriorating”.

Ahead of the business advisory being issued by the departments of State, Treasury, Commerce and Homeland Security, the president warned: “The Chinese government is not keeping its commitment that it made, how it would deal with Hong Kong”.

The national security law was introduced in Hong Kong last year after protests over an extradition law turned violent and evolved into a broader anti-China and pro-democracy movement. It makes it easier to punish protesters and reduces the city’s autonomy.

The advisory covers several other areas including freedom of the press, data privacy and sanctions imposed by both sides.

As part of the update on Friday, the US also announced sanctions against seven Chinese officials over what it describes as an “erosion of the rule of law”.

Jeff Moon, a former assistant US trade representative who worked on Hong Kong policy during the Obama administration, told the BBC: “I think this is quite serious.

“I think it’s a reflection of the dramatic changes that have gone on in Hong Kong.”

He pointed out that hundreds of American companies have a presence in Hong Kong. According to the American Chamber of Commerce in the city, about 280 companies have regional headquarters there.

It said in a statement that it was aware “of an increasingly complicated geopolitical environment and its risks”.

“We are here to support our members to navigate those challenges and risks while also capturing the opportunities of doing business in this region,” it said.

Businesses with operations or staff in Hong Kong should consider potential reputational and legal risks, the advisory says.

Mr Moon added that although Hong Kong is an incredibly valuable economic hub, the so-called “one country, two systems” principle which has come under pressure means its appeal to foreign firms will have changed.

However, the advisory does not recommend businesses withdraw from the area.

But Jamieson Greer, an international trade lawyer and former chief of staff to US Trade Representative Bob Lighthizer during the Trump administration, told the BBC that companies may consider leaving as a result.

“China and the US are essentially now telling financial institutions, private equity, other financing institutions, that they may have to choose one side or the other,” he said.

That could result in a separation of financial supply chains around the world, he warned.

Beijing said it would follow up with a “firm response” to any action taken by Washington.

“We urge the US side to stop interfering in the Hong Kong issue and China’s internal affairs in any form,” Chinese Foreign Ministry spokesman Zhao Lijian told a news conference on Friday.

It comes several days after the US warned businesses about having links to China’s Xinjiang region, citing alleged abuses of the mostly Muslim Uyghur minority group and surveillance there.

American firms that still have supply chain and investment ties in the region were told they “could run a high risk of violating US law”, it said.

China has denied previous allegations that the region’s Uyghur population has been subjected to human rights abuses.