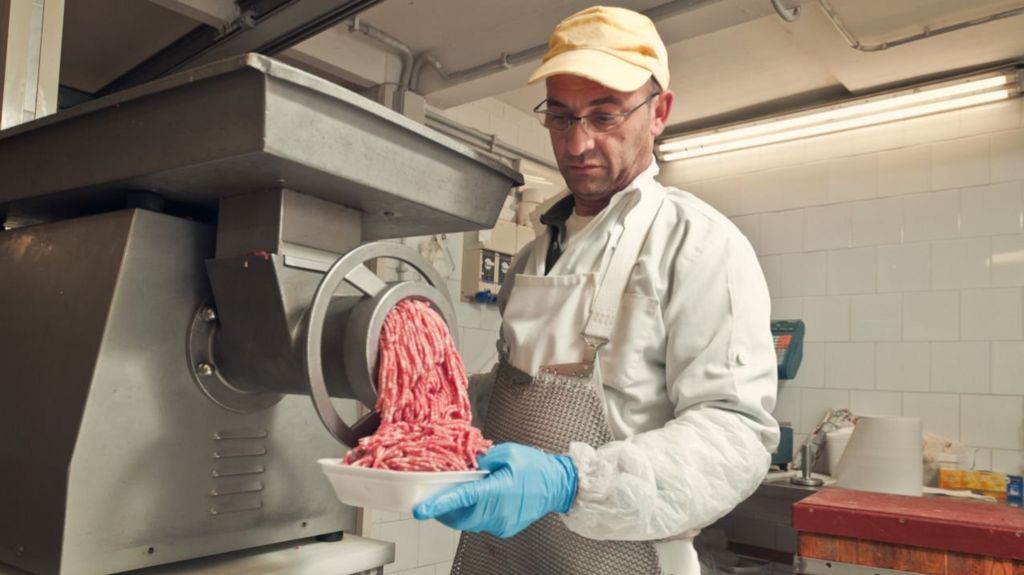 Staff absences could see shortages of meat products, the industry has warned.

Meat processors are seeing up to one in 10 of their workforce told to self-isolate by the NHS Covid app.

Some companies could be forced “to start shutting down production lines all together,” warned Nick Allen, chief executive of the British Meat Processors Association (BMPA).

As Covid cases exceed 250,000 a week, a growing number of businesses are reporting disruption due to absence.

The UK meat processing industry employs about 97,000 workers in the UK, but it was suffering from shortages before the pandemic began.

Many firms were operating with 10% fewer staff than they needed. The latest increase in absences has added to the problem.

“As a result, companies are having to simplify down their range of products to compensate for key skills being removed from their production lines,” says Mr Allen.

“If the UK workforce situation deteriorates further, companies will be forced to start shutting down production lines all together.”

The BMPA represents about 90% of the industry by value of production.

The first products to be hit could be the cuts which require more work from skilled butchers, such as French-trimmed lamb chops with the fat removed, according to Mr Allen.

These are also among the most profitable lines for processors, so the financial impact could be significant.

Mr Allen called for greater clarity about how long to isolate for when pinged by the app and continued access for business to free Covid testing kits, which is due to end on 19 July.

Businesses are warning of increasing levels of Covid absence, as the current wave of infections grows. The number of people notified by the app in England and Wales recently passed half a million in a single week.

Lord Bilimoria, president of the CBI – which represents 190,000 businesses – said that number came as a “genuine shock.”

“Staff shortages are being felt acutely across all sectors and in all areas of business particularly, hospitality and leisure,” he said.

Lord Bilimoria believes the NHS Test and Trace system needs an “overhaul” and is calling on the government to “urgently” bring forward its plans to allow double-jabbed individuals not to self-isolate if they have been informed by the app that they have come into contact with a Covid positive individual.

Earlier this month, Health Secretary Sajid Javid warned that the number of cases could hit 100,000 a day – more than double the current level.

Car-makers Nissan and Rolls-Royce have warned that production could be affected by large numbers of staff being told to isolate and UK Hospitality, the trade body for bars and restaurants, said it was causing “carnage” among its members.

From 16 August, the rules in England will change so that anyone who has had two vaccinations will not be required to self-isolate if the app says they have been in close contact with an infected person.

Post-Brexit recruitment difficulties have made staffing problems worse in the meat processing industry, with some firms drawing 80% of their staff from the European Union, according to Mr Allen.

“We’ve been calling on the government for months to add butchers to the Shortage Occupation List, which would allow the industry to temporarily fill these growing vacancies with overseas workers until the current crisis has passed,” he said.