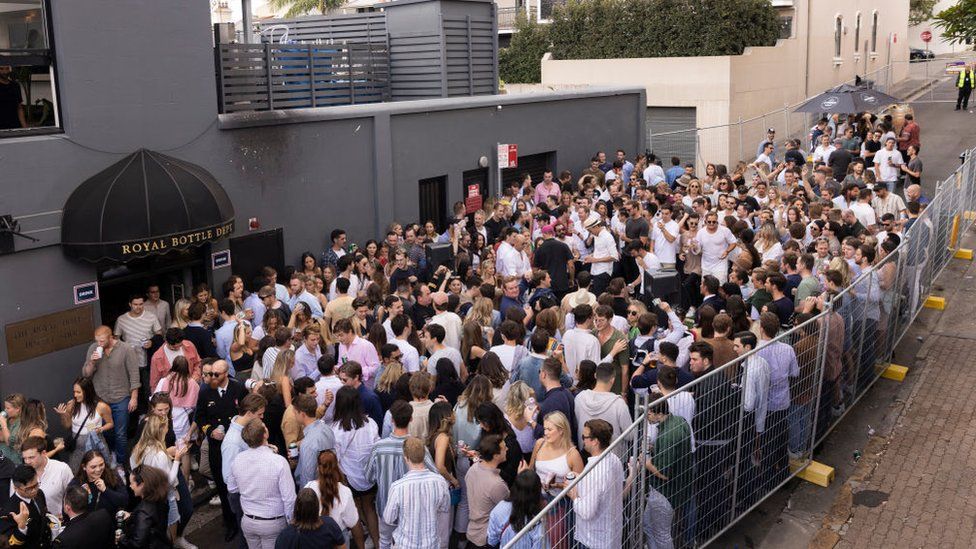 For the past year, Australia has been coasting along almost blissfully detached from the global pandemic. It had achieved a “Covid normal” where people could visit restaurants and nightclubs and join crowds at festivals and theatres.

When cases did leak, officials acted quickly, locking down cities and chasing every infected contact.

But in the past fortnight, the Delta variant has managed to breach the city’s defences. In one week, positive cases have ballooned to more than 100.

By Friday 25 June, officials conceded the need to put Sydney into lockdown. By the following Monday, the crisis had became a national one – with outbreaks in four states and territories.

Sydney, Darwin, Perth and Brisbane – all capital cities – are now in lockdown.

More than 20 million Australians, around 80% of the population, are living under restrictions – the highest number since a national lockdown at the start of the pandemic.

In an emergency meeting on Monday, federal and state governments attempted to plug the holes by expanding vaccine access.

But many Australians are asking why they’re back living under restrictions, seven months after the world started mass vaccinations.

How Delta went through the weak spots

Epidemiologists say the Delta variant has proven to be the most infectious and transmissible of all the strains so far.

Where there were cracks in Australia’s defence system, it succeeded in exploiting them.

The nation’s border and quarantine system had been increasingly challenged since the first variants emerged in late 2020.

Officials documented cases where travellers were catching the virus in quarantine, despite staying in separate rooms.

Experts raised concerns about air recirculation and the lack of fresh air in city hotels.

Around 370,000 people have gone through the system. But there have been 10 breaches leading to outbreaks.

Two outbreaks troubling Australia right now come from people who served hotel quarantine. One is a mine worker in the Northern Territory who caught the virus in Queensland quarantine. The other is a Queensland woman whose infection surfaced just as she completed her stay.

The other weak spot is workers at the border.

Australia has been notoriously strict on gatekeeping who’s allowed into the country – with weekly limits on the number of returning citizens and outright bans from some virus hotspots.

When they step off their plane, returnees are greeted by an intimidating coterie of soldiers, police officers and nurses – masked-up and gloved to escort arrivals straight to quarantine.

But the same rigour isn’t applied to other workers – like drivers transporting arrivals.

Patient Zero in the Sydney outbreak was a limo driver in his 60s who caught it from a passenger. He was neither vaccinated, wearing a mask nor being tested regularly – and he didn’t need to under the rules at the time.

Despite these flaws, experts note that Delta is a “formidable foe” due to its high infection rates.

In New South Wales, of which Sydney is the state capital, officials are reporting near 100% household transmission compared to 25% for earlier strains. People there have caught the virus just from passing one another in a shop.

“Delta is just extremely, highly contagious. And even with the vaccinated workforce there’s still potential to transmit,” says Prof Nancy Baxter, head of the School of Population and Global Health at the University of Melbourne.

She points out that prior to the outbreak, officials had seen Delta cases where “they can’t even identify how the transmission occurred”.

Delta’s danger has also shone a light on failures in Australia’s vaccine programme. Just under 5% of the adult population is fully vaccinated, with 29% having received a first dose.

Australia is last among OECD countries, when it comes to the rollout of vaccines. Critics say the government is responsible.

Australia remains dead last in the OECD for the share of people who are fully vaccinated. Only 4% of the population has been able to get access to vaccines. That’s not because people don’t want it, it’s because Scott Morrison doesn’t have the supply to give it to them. pic.twitter.com/M6AelAGuxw

“In that sense, the population is very vulnerable.”

The delay has been linked to supply issues, complacency over low Covid rates, and concerns around Astra Zeneca’s rare blood clotting risk.

That led the government earlier this year to limit its use for people over 60, despite not having enough supply of its other option – Pfizer.

It spooked many Australians – including the limo driver linked to Sydney’s outbreak, who according to local media was afraid of taking the AstraZeneca jab.

So what is Australia doing now?

Experts are unanimous that the current outbreaks must be contained with lockdowns and other restrictions. While it’s early days, they hope that Sydney’s two-week shutdown will be enough to curb the virus’ spread.

But to ward off future Delta outbreaks, Prime Minister Scott Morrison seems to have accepted what experts have been urging for some time: increasing the pace of vaccinations.

He has ordered mandatory jabs for aged care and quarantine workers in the most high-risk settings.

Experts warn that Delta is likely to have changed Australia’s Covid landscape for good.

With mass vaccination unachievable until 2022, and Australians continuing to return home from abroad, Delta’s threat will linger, experts say.

That could mean measures like mask-wearing in public will need to be mandatory for some time yet.

“Prior to this, it’s been wonderful. You’re going out to dinner, you’re going to shows with thousands of people,” said Dr Baxter.

“But I’m not sure if we’re going to be able to do that again until we’re all vaccinated, because there’s too much of a risk. I just think we can’t live like Covid doesn’t exist any more.”