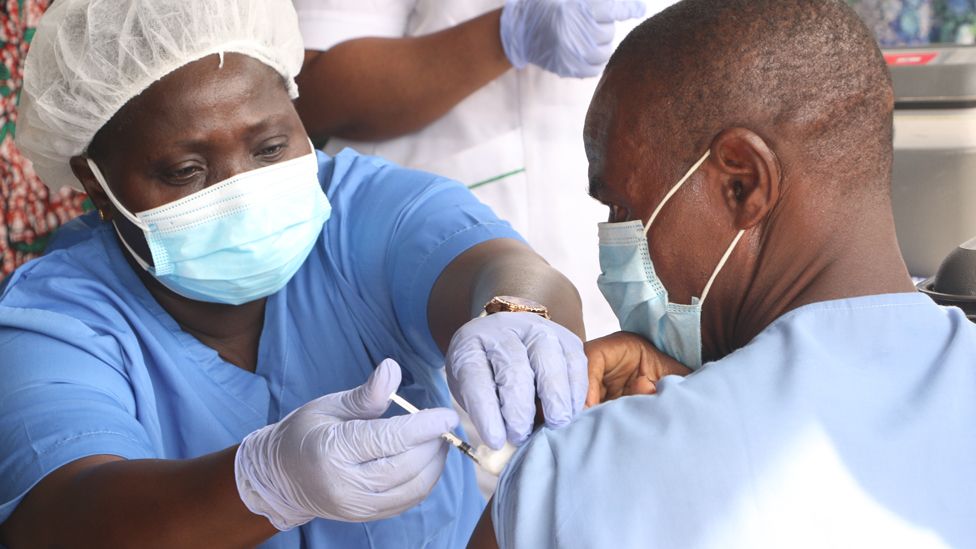 Health and care workers are being “left behind” in efforts to vaccinate the world against Covid-19, nursing leaders say.

There were promises they would be among the first to be jabbed.

But the International Council of Nurses (ICN), which represents 27 million professionals, says tens of millions have not even had one dose.

The World Health Organization (WHO) estimates around 200 have died each day since the pandemic began.

Howard Catton, chief executive of the ICN, says: “If this was an airline going down every day with 200 people on board, there’d be immediate investigations.

“You’ve got nurses and healthcare workers knowing that they are at higher risk, knowing that there is a way to protect them… and that people who are far less vulnerable in other countries are getting that protection. But they are being left behind.

“It feels that despite all of the warm words of support, nurses and healthcare workers are in some way are dispensable or disposable.

Mandy Malambo, a nurse in Lusaka, Zambia, has had one dose of a Covid vaccine and is eagerly awaiting her second.

“Things have been very, very difficult during the pandemic,” she says. “We have been short-staffed, and the number of cases we are receiving each and every single day is overwhelming.

“The staff are not able to take care of these Covid patients. so work has been very, very stressful, especially when you think, what if today is the day that I contract coronavirus?

Reporting of infections and deaths among healthcare workers is patchy and the true figure is thought to be far higher than the 6,643 officially reported to the WHO.

Many countries are not officially reporting the number of health and care workers who have died of Covid, and the WHO estimates the real figure is at least 115,000 – and potentially much higher.

The organisation’s Dr Jim Campbell says: “It’s a moral responsibility that we should all be concerned about.”

There are around 135 million health and care workers around the world, according to the International Labour Organization.

The latest data reported to the WHO from 140 countries suggests just one in eight is fully vaccinated, the vast majority in richer nations.

Dr Phionah Atuhebwe, from the WHO’s Regional Office for Africa, says 2.4 million health workers across 38 countries have had at least one dose of a vaccine – but another 66.2 million doses are needed to ensure all health and care workers in the region are double-jabbed.

In Nigeria, for example, health workers have a range of concerns around safety and supply, but research also found they were unable to take time off work for vaccination.

The ICN says it’s essential there is a better record of how many healthcare workers fall ill and die from Covid.

“The data will raise some difficult and uncomfortable questions about the level of risk, and whether there could have been more effective policy responses to protect those people,” says Mr Catton.

It’s also these countries that tend to have precious few health and care workers.

The wider concern is that if they are not protected, the communities they serve are also left more vulnerable.