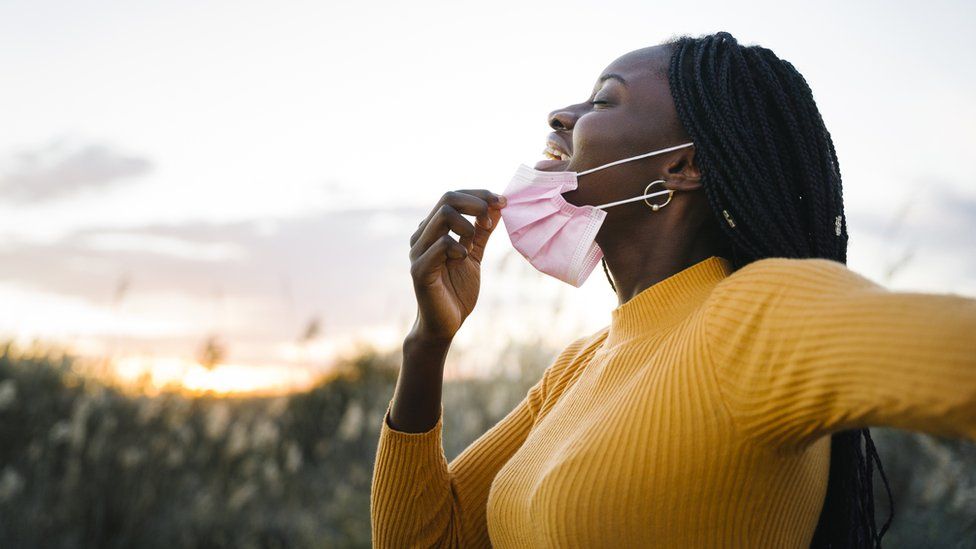 The legal requirement to wear face masks in England to help stop the spread of Covid has now been lifted.

The government has said it “expects and recommends” people continue wearing a face covering in enclosed spaces.

But if businesses want customers or passengers to use a mask, it is now up to companies to get people to comply.

Or, more specifically, it will be their employees who will have to ask the public to wear a face covering.

Some businesses, such as Tesco and Sainsbury’s, have said they will “encourage” shoppers to wear face coverings. Uber is making mask-wearing mandatory.

Waterstones also said it will ask people to wear masks in its book shops. However, judging by the mixed response the retailer received to its announcement, it is a hugely contentious issue.

So, the BBC asked a cross-section of workers in England how they felt about masks, and whether they will feel safe now that, from Monday, they are no longer compulsory.

“This is just another nail in the coffin,” said Taj, who has been driving buses in Yorkshire for nearly 35 years.

Face coverings were, he said, “the last safety net” for him and his fellow bus drivers but now they are being lifted, they “feel vulnerable”.

The pandemic has been dangerous for bus drivers. A recent report found that 42 staff who worked on buses for Transport for London died after catching the virus.

Taj, who did not want his surname used, says the problem for drivers is that they are in a “confined corner” of a “confined bus” and “everybody has to pass us”.

“Whether they’ve got a pass or they pay, they have got to touch the machine one way or the other so they are stood in our vicinity for five, 10, 15 seconds. If they aren’t wearing a mask, they are breathing and exhaling in that small space where we are.

“We can wear a mask, we can leave a window open, but still these are really, really worrying times for us.”

Taj said while his employer has been very supportive of its workers, there is only so much the firm or he can do.

“We said it from the beginning that we would not be able to police it because that would put us in a very difficult position. People may actually become violent.”

He wants the government to make masks mandatory for travelling on public transport.

“We are a nation that doesn’t like to be confined and imprisoned in any way, shape or form,” he says. “That’s why we think that as soon as restrictions are over on Monday we are not going to be able to get people to wear masks on buses so that’s why we are asking for the government to make it mandatory.”

His message for passengers? “We are just asking people to be mindful that we are human beings,” he said. “All we are asking is please respect our health, our safety and the health and safety of our loved ones.”

Cathryn, who works in a large superstore in Chesterfield, thinks it is a mistake to remove the legal requirement to wear a mask as well as relaxing social distancing rules.

“In the last few weeks in our store alone we’ve seen an increase in people testing positive and self-isolating,” she said. “That kind of data is significant enough to warrant adhering to social distancing measures.”

However, even with rules in place, she said it has been difficult to get people to wear masks in-store. Some customers have even spat at her colleagues

“People have been really nasty. You wouldn’t tolerate it in a normal environment. Why should we because we’re employees?”

She believes that with the number of Covid cases rising in the UK, rules should be getting stricter not being relaxed.

“We’ve had the football, people travelling more – it’s common sense you get a rise in positive cases and isolation. Where’s the common sense factor in loosening all the restrictions for it to have more impact?

“It’s not just a personal point of view,” she said. “You’ve got to think about the amount of people in store. It’s not just about yourself, it is about everyone.”

Ferdinand Lyons, a full-time bar worker at a pub in London, is “slightly apprehensive” about the relaxation of Covid rules in England on Monday.

“Obviously, if we don’t feel comfortable with [customers] not wearing masks, it is not exactly like we can say ‘we don’t want to be there’ because it would jeopardise our position in the workplace. That’s the scariest thing,” he said.

He said that getting people to follow rules when pubs have been allowed to open during the pandemic “has already been quite difficult for us”.

Although, Ferdinand said, most customers have been fine with wearing masks and have not had any issues with social distancing rules.

And anyway: “In a pub, we’re in a bit more of a privileged position where if they aren’t following the rules we can refuse service,” he said. “So, it has been a bit easier because obviously people want to remain in there.”

What Ferdinand would like to see is the option of the government being able to re-introduce masks again if case numbers warrant it.

But he believes government ambivalence “with what the restrictions are going to be and the rules around it is putting us in a position where we don’t know whether they have to or they don’t have to [wear masks]. I think that’s the biggest problem, and so it is harder for us to do our job”.