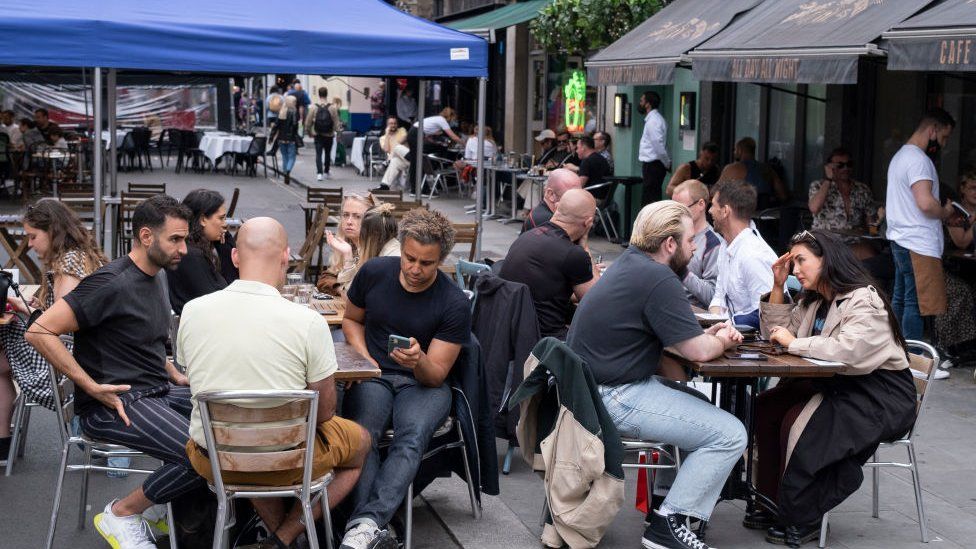 Pavement dining and outdoor pint licences will continue for another year in England as part of a government plan to get hospitality back on its feet.

Hospitality has been one of the hardest-hit sectors during Covid but rebounded strongly in recent months.

But the industry is still facing challenges with a sustained staff shortage and the permanent closure of nearly 10,000 licensed premises.

As part of its new strategy for hospitality, the government will also work to highlight vacancies in the industry to jobseekers.

Minister for small business Paul Scully said the government strategy would “explore new options for vocational training and help further boost the creativity and environmental friendliness of the sector”.

“The extension – and potential permanent retention – of streamlined pavement licensing is a real boost for pubs, cafes and restaurants, who will be delighted that they can continue to make use of outdoor areas, helping them to navigate their way more speedily back to profitability,” she added.

The UK economy expanded by 0.8% in May, in part due to the reopening of indoor hospitality, which meant the service sector grew 0.9%. But Ms Nicholls recently told a group of MPs that the industry had amassed £2.5bn of rent debt.

“Building and training our workforce is a top priority if hospitality is to quickly revive and drive a national recovery, so it’s incredibly positive that a key part of this strategy is focused on addressing the current recruitment challenges and raising the profile of long-term sector careers,” she added.

The government’s plan will also focus on carbon reduction and working with businesses to reduce waste and plastic consumption.

Ellie Gill, landlady at The Grapes in Bath explained that without takeaway pints and outside space her business would not have been able to open last April.

The pub has capacity for 35 socially-distanced customers inside and the pavement licenses meant she could double the capacity and sit an extra 40 outside.

“With the amount of cases going on sitting outside is what people most want to do,” she said.

The pub is piloting so-called ‘parklets’ where unused parking spaces are turned into extra space for outdoor dining, as agreed with the council.

“It has enlivened Bath,” she told the BBC.

“If we’re looking at a future of pandemics, allowing seating outside, reducing city traffic and pollution is what we need to do so businesses survive.”

Accessibility campaigner Katie Pennick told the BBC she felt the initial pavement licenses were “vague” in ensuring that clear routes of access are maintained. Though her wheelchair is only 23 inches wide, she said really struggled to get through a street on a Friday night.

‘Its been a life-saver’

David Taylor, who owns London-based Balans restaurants, says that the pavement licence has been a “life-saver” for his business.

His two restaurants on London’s Old Compton Street have been able to add 30 extra customers for each premises. But Mr Taylor told the BBC there are bigger problems businesses like his are facing.

“The government need to sort out the very high business rates and VAT if they really want to get restaurants back on their feet – that should be their top priority.”

Mr Taylor told the BBC that from Monday, Westminster Council have told him they will not allow gazebos and heaters for his pavement dining table and he thinks there could be caveats to the new government strategy.

“Unlike the start of the crisis, we’re on the government’s radar- now they’ve realised how many people work in the sector, so let’s see if they follow through with proper help,” he said.

‘No silver bullet but it’s part of a vital mix’

Mark Laurie from the National Caterer’s Association (NCASS), said local authorities “will need to show flexibility and understanding towards businesses, not just in the pavement licences but opening up high streets and other spaces to the public and for commerce”.

Mr Laurie added the pavement licences have been a “lifeline to many of the independent hospitality businesses we represent”.

“Al fresco is safer, its fun and it will help businesses, at least while the weather holds. It’s no silver bullet but it’s part of a vital mix,” he said.

Ross Bailey, founder of the UK-wide campaign group Save The Street agreed and said it was the “right decision” to extend the licence.

“The extension will allow businesses to capitalise on the massive demand we are seeing post lockdown. The street feels alive again and it is beautiful to see,” he said.