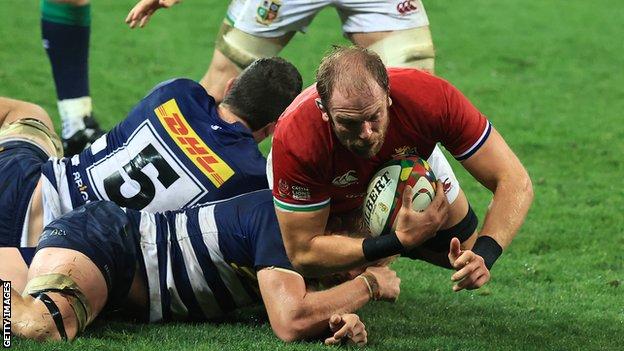 Tandy also confirmed “the majority” of the team for the game had been decided.

Jones, who dislocated his shoulder in a warm-up match against Japan on 26 June, played 30 minutes last Saturday to complete a remarkable recovery.

Asked if the Wales great had played enough rugby to come in for the first Test, Tandy said: “I believe so.”

Jones came off the bench to make his return as the Lions completed their Test series preparations with a 49-3 victory over the Stormers.

Tandy added: “Al historically does some pretty special things. He is fit, he is raring to go. He keeps himself in great shape, so there will be no issues there.

“He has got unbelievable experience. His leadership qualities are outstanding as well. He will be fine.”

Tandy said reaching 10 Lions Test caps would be “an unbelievable achievement”, adding that he felt “really privileged” to have worked with Jones as head coach of the Ospreys.

“Having that injury against Japan, I think 99% of people aren’t coming back and may have given up,” Tandy said.

“He never gives up. I haven’t seen anyone like him being that professional. The lengths he takes it to is pretty unique I think.”

Selection meeting ‘one of toughest things I have been involved with’

Head coach Warren Gatland is set to announce his team for the first Test on Thursday and Tandy said most of the side had been decided, with “one or two things to confirm”.

Fly-half Finn Russell is the only player unavailable for selection as he continues to recover from an Achilles tear, but he is still in contention to feature later in the three-Test series.

Tandy said the coaching staff’s selection meeting on Sunday night lasted more than an hour and a half and involved “massive decisions”.

“It was one of the toughest things I have been involved in,” Tandy added.

“In other tours, maybe people have played themselves out of the Test match 23, whereas I think all our boys have really put their hands up.”

South Africa’s team will be named on Wednesday and the Springboks face an anxious wait to see whether captain Siya Kolisi will be fit after testing positive for Covid-19 on 11 July.

A SA Rugby statement said all players had returned to camp after completing their isolation, but added that Kolisi, prop Ox Nche and wing Makazole Mapimpi would “undergo medical screening before being cleared to begin their return to play protocols”.

Despite the world champions’ coronavirus-hit preparations, which included the whole squad confined to hotel rooms for six days, fly-half Handre Pollard said South Africa “will be ready” to face the Lions.

“The vibe is good and there is some tension, so the preparation and the talking is done, it’s time to get into the matches,” he added.