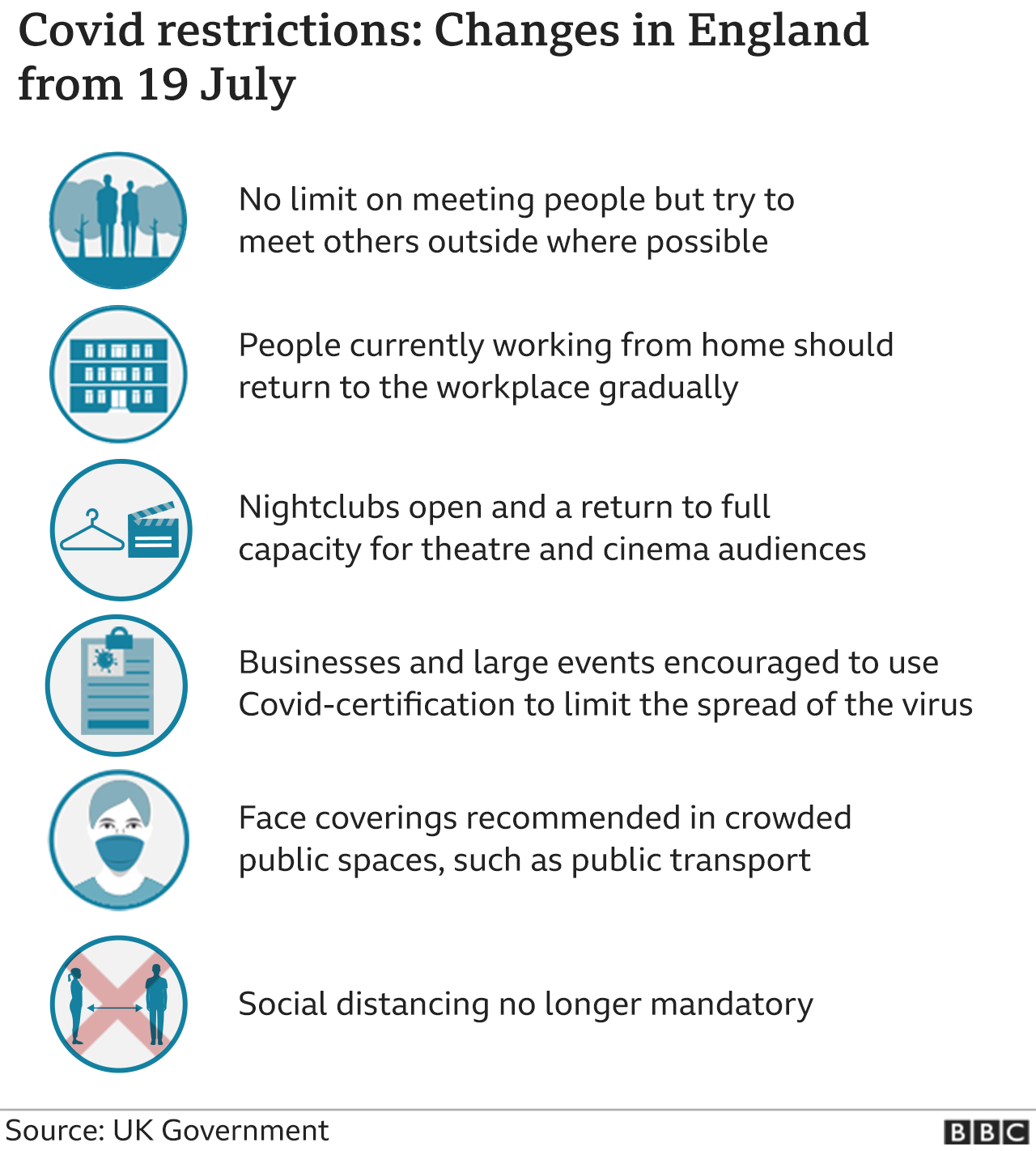 Prime Minister Boris Johnson has urged caution as most legal restrictions on social contact are lifted in England.

There are now no limits on how many people can meet or attend events, nightclubs can reopen, and table service will not be necessary in pubs and restaurants.

Face coverings will be recommended in some spaces, but not required by law.

The PM, chancellor and the health secretary are self-isolating, and there are warnings cases will surge.

Some scientists are predicting that UK infections – currently at about 50,000 a day – could reach 200,000 a day later in the summer.

But with more than 68% of UK adults fully vaccinated modelling suggests hospital admissions, serious illness and deaths from Covid-19 will be at a lower level than in earlier peaks.

In a video posted on Twitter on Sunday afternoon, the prime minister said now was the “right moment” to move to the final stage of England’s roadmap out of lockdown.

“If we don’t do it now we’ve got to ask ourselves, when will we ever do it?” he asked, adding that the virus would have the “advantage of the cold weather” in autumn and winter.

“But we’ve got to do it cautiously. We’ve got to remember that this virus is sadly still out there. Cases are rising, we can see the extreme contagiousness of the Delta variant.”

As restrictions ease in England, businesses such as nightclubs – and large events – will be encouraged to use the NHS Covid Pass to check people are fully vaccinated.

And contact tracing and self-isolation requirements will remain in place.

UK-wide guidance recommending against travel to amber list countries is also being removed. Adults who have been fully vaccinated in the UK will not have to self-isolate for 10 days after visiting these countries – with the exception of those returning from France to England, Scotland or Wales, because of concerns over the spread of the Beta variant of the virus.

Scotland is easing restrictions so that pubs and restaurants can open until midnight – but limits on outdoor meetings will remain, the return of workers to offices will be delayed and face coverings will still be mandatory.

Restrictions are set to be relaxed in Wales on 7 August and in Northern Ireland on 26 July.

Mr Johnson and Chancellor Rishi Sunak are self-isolating after contact with the health secretary, who announced on Saturday that he had tested positive for coronavirus.

No 10 initially said they would not have to isolate, as they were taking part in a pilot scheme that involves daily testing instead – sparking a backlash from opposition parties and businesses affected by staff quarantining.

The UK recorded a further 48,161 cases and 25 deaths within 28 days of a positive coronavirus test on Sunday. On both Friday and Saturday daily cases exceeded 50,000 – the first time this level has been reached since mid-January.

Almost 88% of adults in the UK have had a first dose of a Covid vaccine, and 68.3% are double jabbed, according to the government’s coronavirus dashboard.

A decision on routinely offering Covid jabs to under-18s is expected within days.

However, the scientist whose modelling led to the first nationwide restrictions has expressed concern that the UK could see as many as 200,000 cases and 2,000 hospital admissions a day.

Speaking on the BBC’s Andrew Marr Show, Prof Neil Ferguson suggested a peak could occur between August and mid-September.

More than half a million alerts telling people to self-isolate were sent by the NHS Covid-19 app in England and Wales in the first week of July, with supermarkets saying they may have to cut opening hours or shut shops due to a lack of staff.

Absences from school have also surged, with 840,000 pupils self-isolating last week, with a further 630,000 absent for other reasons.

People who are “pinged” by the app are advised to self-isolate for 10 days, but those contacted by NHS Test and Trace in England via text, email or phone can be fined if they do not self-isolate.

Some fully vaccinated frontline NHS staff in England will be allowed to continue working if contacted by NHS Test and Trace, the government has said, amid concerns over employee shortages.

Shadow health spokesman Jonathan Ashworth said the government was being “reckless” with Monday’s easing of rules, adding: “We are saying keep masks, keep working from home… We are in favour of the economy reopening but we would put in place a series of precautions to try and slow the growth”.

Lib Dem MP Layla Moran, chair of the All-Party Parliamentary Group on Coronavirus, said the government was “adding fuel to the fire” by easing so many restrictions when the virus was “surging”.

“We are already seeing businesses disrupted and hospitals filling up, showing that pitting lives against livelihoods was always a false choice,” she said.