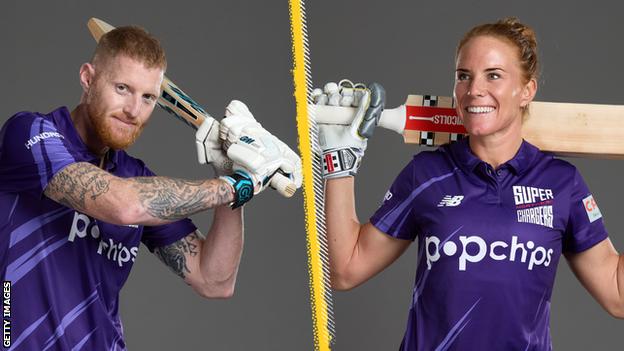 With a host of international stars, Northern Superchargers are ready to light up The Hundred. Here’s BBC Sport’s guide to the Headingley-based outfit.

Aussie Darren Lehmann is the eye-catching head coach of the men’s side. Lehmann won the 2015 50-over World Cup and two Ashes series during his time in charge of Australia, before it was brought to an end by the infamous ball-tampering scandal.

Lehmann’s sides have matched his approach as a player – tough and uncompromising. He returns to Headingley where he spent seven seasons with Yorkshire. He wants to entertain the passionate northern crowd.

“They’ll demand we play an entertaining brand of cricket and have some success,” Lehmann said.

Dani Hazell is an exciting prospect as Superchargers’ women’s team coach. The former England bowler only retired in 2019 after more than 140 international appearances but has already led the Northern Diamonds to the final of the domestic Rachael Heyhoe Flint Trophy.

She was described by her team-mates as “fiery and a fighter” during her playing days, which included a rise to number one in the Twenty20 world bowling rankings.

Ones to watch: Superstar Stokes and in-form Parkinson

Who else? Ben Stokes is probably the biggest name in English cricket. His appearances will be limited by England duty but when Stokes does play it will be box office.

He can smash it with the bat, change the game with the ball and produce jaw-dropping moments in the field.

Stokes returns to the scene of his greatest innings, too.

Callum Parkinson may not be as well known as some of his Superchargers team-mates – England internationals David Willey and Adil Rashid in particular – but could have a big role to play.

Brother of England international Matt, Parkinson, he has had an impressive season with Leicestershire with his left-arm spin. In tandem, he and leg-spinner Rashid could be match winners.

Ones to watch: Two local heroes

Another international star representing the Superchargers is Lauren Winfield-Hill. Fresh from England duty the batter will return to captain her local side in the tournament.

The stylish right-hander, who can whack it as hard as anyone, scored an eye-catching 110 at Headingley earlier this year in the Rachel Heyhoe Flint Trophy.

Winfield-Hill also holds the joint-record for the highest opening partnership for England in Twenty20 cricket – she put on 147 with Tammy Beaumont in 2016. She could be devastating at the top of the order in The Hundred.

Katie Levick is one of – if not the – best woman never to play for England. The leg-spinner is the all-time leading wicket-taker in domestic English cricket, ahead of her more heralded contemporaries with international caps to their name.

The 29-year-old from Sheffield opted for a full-time job aged 21 rather than chasing international caps and has since been overlooked despite remarkable statistics in the domestic game. Now Levick has her chance to shine.

She has spoken recently about the difficulties of contracting long Covid – Levick was left unable to walk down the stairs – but now she is back and ready for the action.

Jemimah Rodrigues is one of the biggest stars in The Hundred, never mind the best young player in the Superchargers squad. Exciting on the field and a livewire off it, the 20-year-old India batter could set the tournament alight.

She made her India debut aged 16 and is seen as one of the future stars of cricket.

She has a big Instagram following where she regularly entertains fans by singing or playing her guitar.

There have been whispers about Harry Brook, a former England Under-19 captain, ever since he scored his first century for Yorkshire aged 19.

He’s now 22 and after an inconsistent run, is in some of the best form of his career. He hit a brilliant 83 not out from 54 balls against Worcestershire in the T20 Blast in June, the highlight in a run of solid form.

Given a role in the Superchargers’ middle order, The Hundred could see Brook truly deliver on his huge potential.

Why Superchargers will win The Hundred

The men’s side have a core of international-quality players who, crucially, should be available for the vast majority of the competition to give Northern Superchargers a real chance of victory.

Leg-spinner Rashid and all-rounder David Willey are England stars but will not be on international duty during the tournament.

Throw in batter Adam Lyth, whose England days are behind him but has been one of the most destructive openers in the T20 Blast in recent years, Australia opener Chris Lynn, Afghanistan spinner Mujeeb ur Rahman and the exciting Durham fast bowler Brydon Carse, and the Superchargers look to have all bases covered.

That gives Hazell’s side a good starting point for this season.

The addition of Rodrigues is exciting as is the signing of 22-year-old South Africa batter Laura Wolvaardt, who replaces Australia star Alyssa Healy. Wolvaardt is a highly-rated opener who could cause a formidable partnership with Winfield-Hill.

Why they won’t win The Hundred

A season-ending injury to England fast bowler Olly Stone has left the Superchargers with an inexperienced-looking fast bowling attack.

A lot will rest on the shoulders of Willey to lead the likes of 22-year-old Matty Potts, 23-year-old Matt Fisher, 24-year-old Jordan Thompson and 25-year-old Carse.

Australia captain Aaron Finch was due to lead the side before his withdrawal and without him, and when Stokes is away on international duty, a lot will rest on new recruit Faf du Plessis, the former South Africa skipper, in terms of guiding the younger players.

The loss of Healy because of complications caused by the pandemic is a big blow to the Superchargers.

Wolvaardt is a good replacement – she has an international knock of 149 to her name – but she does not have the winning pedigree of Healy, a five-time T20 World Cup winner.

Healy could have won games on her own but without her Superchargers, although a very solid outfit, may lack the star quality others will fear.