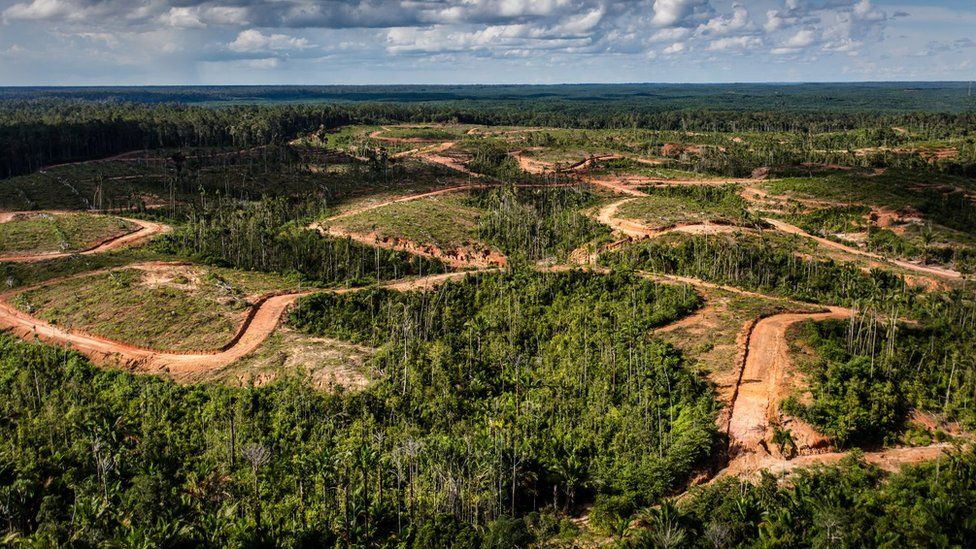 A Korean palm oil giant has been rejected from the world’s leading green certification body in the wake of a BBC investigation.

The BBC had earlier found evidence that the Korindo group had been buying up swathes of Asia’s largest remaining rainforests in the remote Indonesian province of Papua.

A visual analysis suggested that fires had then been deliberately set to these forests, a clear violation of the Forest Stewardship Council (FSC).

The regulator’s tree logo – found on paper products throughout the UK and Europe – is meant to tell consumers the product is sourced from ethnically and sustainable companies.

At the time of the BBC’s investigation late last year, the FSC said they would not expel Korindo but were working with the Korean company to address social and environmental problems.

But now the green body says the relationship has “become untenable” and Korindo’s trademark licenses with FSC will be terminated from October.

“We were not able to verify improvements in Korindo’s social and environmental performance,” Kim Carstensen, FSC international director general said.

He said the decision would “give us clarity and a breathe of fresh air while Korindo continues its efforts to improve.”

Korindo groups chief sustainability officer Kwangyul Peck said in a statement that the company was “very shocked by the FSC decision.”

He insists they were following all the steps of “an agreed roadmap of improvements” and said despite their expulsion from the FSC “they remain committed to sustainability and human rights.”

‘A violation of traditional and human rights’

Korindo controls more land in Papua than any other conglomerate. The company has cleared nearly 60,000 hectares of forests inside its government-granted concessions – an area the size of Chicago or Seoul.

A 2018 report by the FSC into the allegations against Korindo was never published, after legal threats from the company, but the BBC obtained a copy.

The report found “evidence beyond reasonable doubt” that Korindo’s palm oil operation destroyed 30,000 hectares of high conservation forest in breach of FSC regulations and that the company was, “on the balance of probability … supporting the violation of traditional and human rights for its own benefit.”

A visual investigation by the Forensic Architecture group at Goldsmiths University in London and Greenpeace International, published in conjunction with the BBC, also found evidence that indicated deliberate burning.

Kiki Taufik, head of the Greenpeace Southeast Asia forest campaign said the FSC decision was “better late than never” saying they had “finally come to their senses”.

But he said the Indonesian government continues to “grant companies like Korindo forest concessions, allowing them to violate the rights of indigenous people.”

“It is crucial that buyers and certification bodies don’t keep helping them create a facade of sustainability and transparency,” he said.

After the BBC’s investigation last year, the Indonesian parliament had launched an inquiry into Korindo’s conduct – though the findings have not been made public.

The Korindo group strongly denies starting any fires or involvement in any human rights violations, saying it follows the law. They also insisted they paid fair compensation to tribes.

Indonesia is the world’s largest exporter of palm oil – found in everything from shampoo to biscuits – and Papua is its newest frontier.

The rich forests in the remote province of Papua had until recently escaped relatively untouched, but the government has rapidly opened the area up to investors, vowing to bring prosperity to one of the poorest regions in the country.

Vast areas of forest have been cleared to make way for row upon row of oil palm trees.

Indonesia’s palm oil exports were worth about $19bn (£14bn) last year, according to data from Gapki, the nation’s palm oil association.