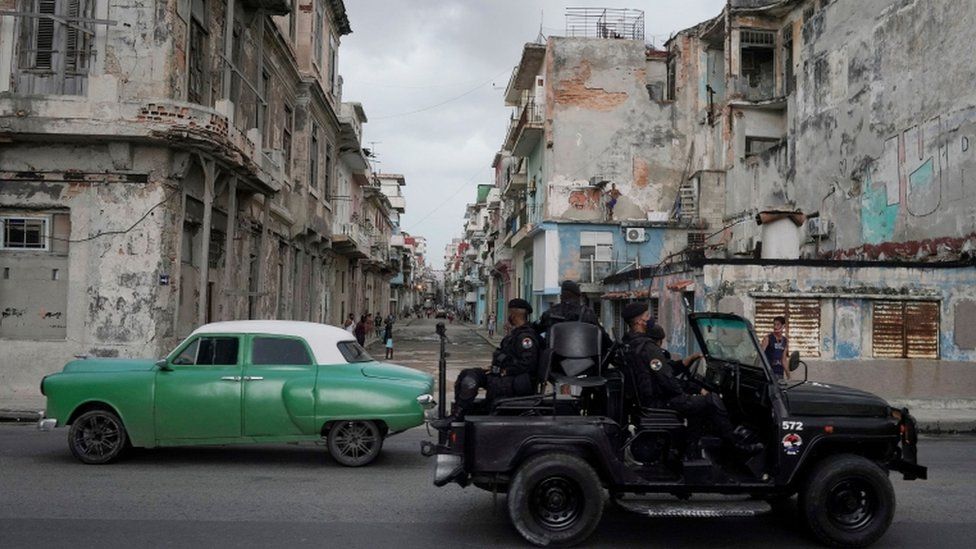 As of next Monday, there will be no limit on such goods brought in by travellers until the end of the year.

Thousands took to the streets on Sunday in protests over food and medicine shortages, price increases and the government’s handling of Covid-19.

One demand they had was for people arriving in Cuba to bring in supplies without paying customs duties.

It is unclear the effect such a customs change will have. Few people are travelling to Cuba currently amid the ongoing coronavirus pandemic.

“No, we don’t want crumbs. We want freedom,” government critic and journalist Yoani Sanchez tweeted shortly after the announcement. “Blood wasn’t spilled on Cuban streets in order to import a few extra suitcases.”

“It was a demand made by many travellers and it was necessary to take this decision,” the prime minister said. The government “will assess things” after 31 December, he added.

Currently travellers to Cuba can bring up to 10kg of medicine into the country tax-free. However, they must pay customs duties on the limited amount of food and personal hygiene supplies they bring in.

Dozens have been arrested nationwide since the unrest began on Sunday. Authorities confirmed on Tuesday that one man had died.

Unauthorised demonstrations are illegal in the country, and anti-government protests are rare.

Cuba has blamed the US and its economic sanctions for the protests and Cuba’s wider problems. On Wednesday the US called for the release of all peaceful protesters detained in Cuba during recent unrest.

AFP news agency journalists reported that Cuban authorities had restored access to the internet on Wednesday after three days of disruption. Some messaging and social media platforms reportedly remained blocked on 3G and 4G however, including Facebook, WhatsApp and Twitter.

Mobile internet was only introduced in Cuba in the last few years and allowed people to organise and spread word of the recent demonstrations.

However a heavy security presence remained on the streets of Havana.