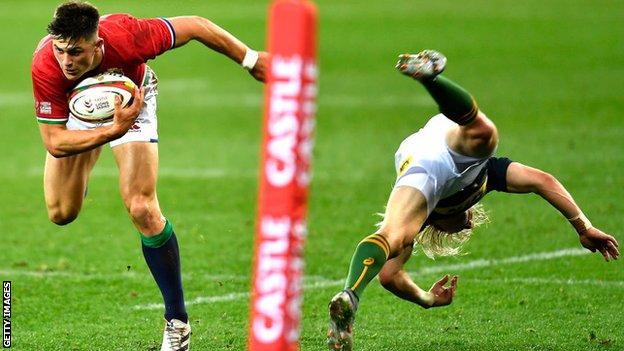 A Test-strength South Africa A inflicted the 2021 British and Irish Lions’ first defeat to serve up a sobering reminder of what awaits when the series starts later this month.

Tries from Sbu Nkosi and Lukhanyo Am gave the hosts a 14-point lead after a powerful first-half display.

The Lions made inroads when Wyn Jones scored with South Africa A down to 13 men after two yellow cards.

But South Africa A regained control and ran down the clock to see out the win.

Louis Rees-Zammit came closest to snatching victory from the hosts, but the Wales wing could not quite stretch enough to dot down after stepping inside scrum-half Faf de Klerk.

The Lions will take heart, however, from their improvement in the second half. The series winner may be the side who can find their find their feet fastest, with the Springboks having played only one match in the last 18 months and Covid potentially causing more disruption before the first Test on 24 July.

South Africa’s side was an A team in name alone, with 18 Rugby World Cup winners in a squad.

After three comfortable wins over Springbok-less provincial sides in which they have scored an average of more than 60 points, the step up in physicality, intensity and class was immediately evident for the Lions

Inside the first minute, second row Eben Etzebeth crashed into a huge tackle on Liam Williams.

And, there was no let-up in the air either as scrum-half De Klerk’s pinpoint kicking probed space and piled pressure on the tourists’ back three.

The hosts’ trademark blitz defence was as suffocating as ever despite South Africa having only played one Test since their World Cup final win in Yokohama in November 2019.

It delivered the first try when the looming Etzebeth charged down a kick from Owen Farrell – in as a late replacement because of Dan Biggar’s minor ankle sprain – and Sbu Nkosi scampered upfield to score.

The second came from Kolbe, who adds a sparkle of stardust to South Africa’s grit. The winger’s dancing feet took him ghosting through the slimmest of holes outside Chris Harris before feeding inside for Lukhanyo Am to trot in.

The Lions scrum stood up well to their counterparts at the set-piece and enjoyed 65% possession before the break, but could not make an impression on the scoreline during a 10-minute period of pressure, heading down the tunnel 17-3 adrift.

South Africa A’s defence was hugely committed but not as disciplined. De Klerk and flanker Marco van Staden both finished the first half in the sin-bin for infringements on their own whitewash in the final minutes of the first half.

It felt as the tourists had to make use of the two-man power play if they were to get back in the contest and prop Wyn Jones duly rumbled over from close range inside three minutes of the restart.

When Farrell landed a penalty, the gap was down to four points.

The Lions seemed to have acclimatised and adapted, getting to the edge of the defence and deploying more men into the breakdown.

Rees-Zammit was mere inches away as he squirmed and stretched for the corner, but South Africa showed resolve and street smarts to stunt the Lions growing dominance.

The timely return of tour captain Alun Wyn Jones after a remarkable 18-day recovery from a partially dislocated shoulder will boost the Lions’ belief and quality.

The tour continues with a meeting with the Stormers on Saturday.

BBC rugby union correspondent Chris Jones: A first defeat for the Lions on tour, and plenty for Warren Gatland to ponder.Individually there have been some strong performances – Wyn Jones, Tom Curry, Maro Itoje, Chris Harris and Anthony Watson among those to excel – but big questions remain about the Lions’ best combinations and their best tactics.But above all, the physicality and intensity from the South Africans suggests that this Lions tour, for all its many setbacks and obstacles and lack of fans, may still be able to throw up a compelling Test series.

Man of the match – Maro Itoje