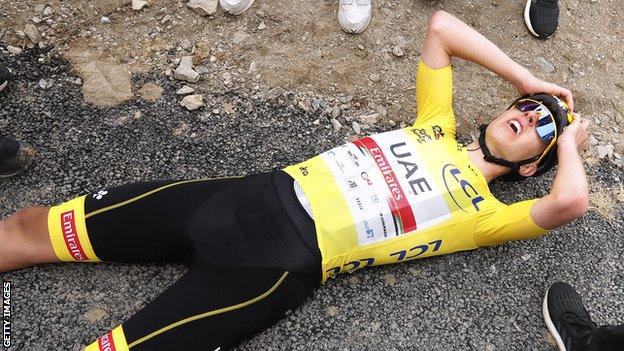 Defending champion Tadej Pogacar took a sublime victory atop the Col du Portet on stage 17 of the Tour de France to extend his lead in the yellow jersey.

The Slovenian, 22, kicked clear of Jonas Vingegaard and Richard Carapaz with 150 metres to go to win his fifth Tour stage overall and second of 2021.

Rigoberto Uran slipped from second to fourth after cracking at 8km remaining.

Pogacar, who won the stage five time trial before taking the yellow jersey on stage eight, has four days left to defend it, though Sunday’s final stage is a processional run to Paris where convention dictates the leader is not attacked.

A gruelling day in the Pyrenees featured three long and steep climbs in the final 60km, but Pogacar’s UAE Team Emirates team-mates were always in control of the race.

They set a fierce pace to reel in Anthony Perez, the last of six early escapees to stay clear, and then launched Pogacar to go it alone halfway up the 2,215m Col du Portet.

Only Vingegaard and Carapaz could stay with him, ensuring they both replaced Uran in the podium places, before the stage win was decided at the very top of the highest finish of this year’s Tour.

‘Jonas said to me that he thought Carapaz was bluffing’

Carapaz had appeared exhausted and stayed on his rivals’ wheels for most of the climb before trying a surprise attack in the final kilometre, but he could not catch Pogacar out.

“Jonas said to me that he thought Carapaz was bluffing and I knew it also,” Pogacar explained. “It was nothing unusual – this is the tactic in cycling and he tried to attack. I had the drive to catch him but it was super hard.

“It was a fantastic day. To win in yellow is something I cannot describe.”

Earlier in the stage, Britain’s Mark Cavendish had kept his grip on the green jersey by limiting his loss to his closest rival, Australian Michael Matthews, to just one point.

Cavendish tracked Matthews over the line in the intermediate sprint that came after 113km of the 178.4km route, and now leads the points category by 36 points.

The Manxman was quickly dropped by the main peloton once the riders entered the mountains, but he still finished safely within the time limit for the stage.