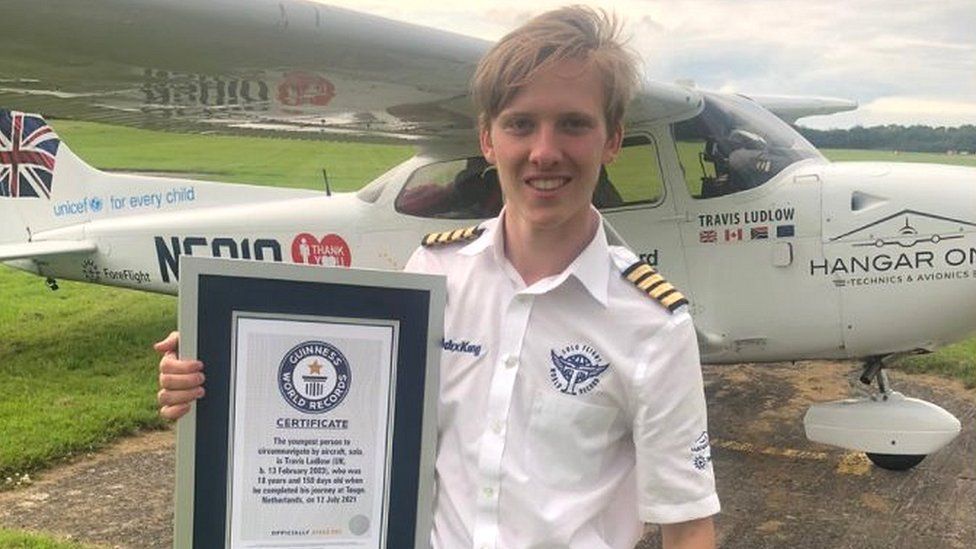 An 18-year-old pilot has broken a Guinness World Record to become the youngest person to fly solo round the world in a single-engine aircraft.

Travis Ludlow, from Ibstone, Buckinghamshire, landed in the Netherlands on Tuesday, having spent 44 days completing the 24,900-mile (40,072km) journey.

At 18 years and 150 days old, he was 13 days younger than the previous record-holder.

He said it was a “strange feeling”.

The teenage pilot said for the first time in weeks he did not have to worry about getting up early, going to bed late, difficult terrain he might have to fly over, or storms.

“It’s a strange feeling – here I am, I’ve arrived and I’ve got nothing to worry about tomorrow – it’s weird.”

His record-breaking flight in his 2001 Cessna 172R took him across Europe, through Russia and America, before returning via Canada, Greenland and Iceland.

The planned route took in about 60 stops across nine countries.

The previous record-holder, Mason Andrews, from Louisiana, completed his flight in 2018.

Recalling his own trip, Mr Andrews said: “It’s really the most dangerous and difficult thing you could do in a single-engine airplane.

“Travis has a bright future ahead of him.

“World records are made to be broken. I had the record. I don’t get anything by continuing to hold the record so I’m more than willing to pass the torch on to the next generation.”

Now Mr Ludlow’s record has been verified and he has the certificate to prove it, he said he had an ambition to break the record for flying solo around the world in an electric aircraft.

His mother, Loryn Ludlow, said for now she was just happy to have her son home.

It was “unbelievable”, what he had achieved, she said, and the family was “so very, very proud.”