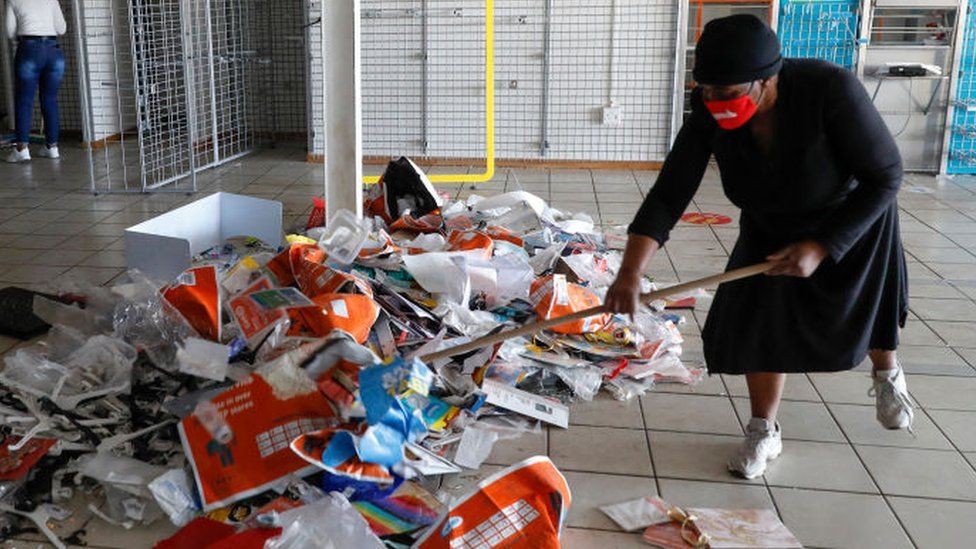 Long queues have formed outside shops and petrol stations in South Africa’s port city of Durban following days of unrest sparked by the jailing of former President Jacob Zuma.

Firefighters are cleaning up the mess, helped by local residents wielding brooms.

Some petrol stations have limited the amount motorists can buy, as fuel transportation has been disrupted.

Meanwhile, Northern Cape and Mpumalanga have become the latest provinces to be hit by violence.

Zuma, 79, was convicted of contempt of court last month after failing to attend an inquiry into corruption during his presidency.

He handed himself in to police last Wednesday to start serving his 15-month prison sentence, but this sparked violent protests, arson attacks, and opportunistic looting in his home province of KwaZulu-Natal.

The protests spread to other towns and cities, including Johannesburg.

President Cyril Ramaphosa has described it as some of the worst violence South Africa has witnessed since the 1990s, before the end of apartheid.

The authorities said at least 72 people have died, 10 of whom were killed in a stampede during looting at a shopping centre in Soweto.

The deployment of soldiers to support the police did not seem to deter looters.

The BBC filmed a baby being thrown from the first floor of a a building in Durban that was on fire after ground-floor shops were looted.

South African police said in a statement on Tuesday that it had identified 12 people suspected of provoking the riots, and that a total of 1,234 people had been arrested.

On Tuesday South Africa’s biggest oil refinery announced that it was suspending its operations, blaming civil unrest in the country and disruption of supply routes in and out of Kwazulu-Natal.

It said it made the decision “due to safety concerns of its staff and damages to their vehicles on the roads.”

A local news site has shared a video of motorists in KwaZulu-Natal queuing for fuel.

Clean up begins after days of looting

Business owners in Durban are slowly returning to their shops to evaluate the damage following days of unrest.

Firefighters have also lined the streets of the city to begin the gruelling process of cleaning up the mess.

Some residents have also joined in – armed with brooms – to help clean up but also to deter anyone trying to loot whatever is left.