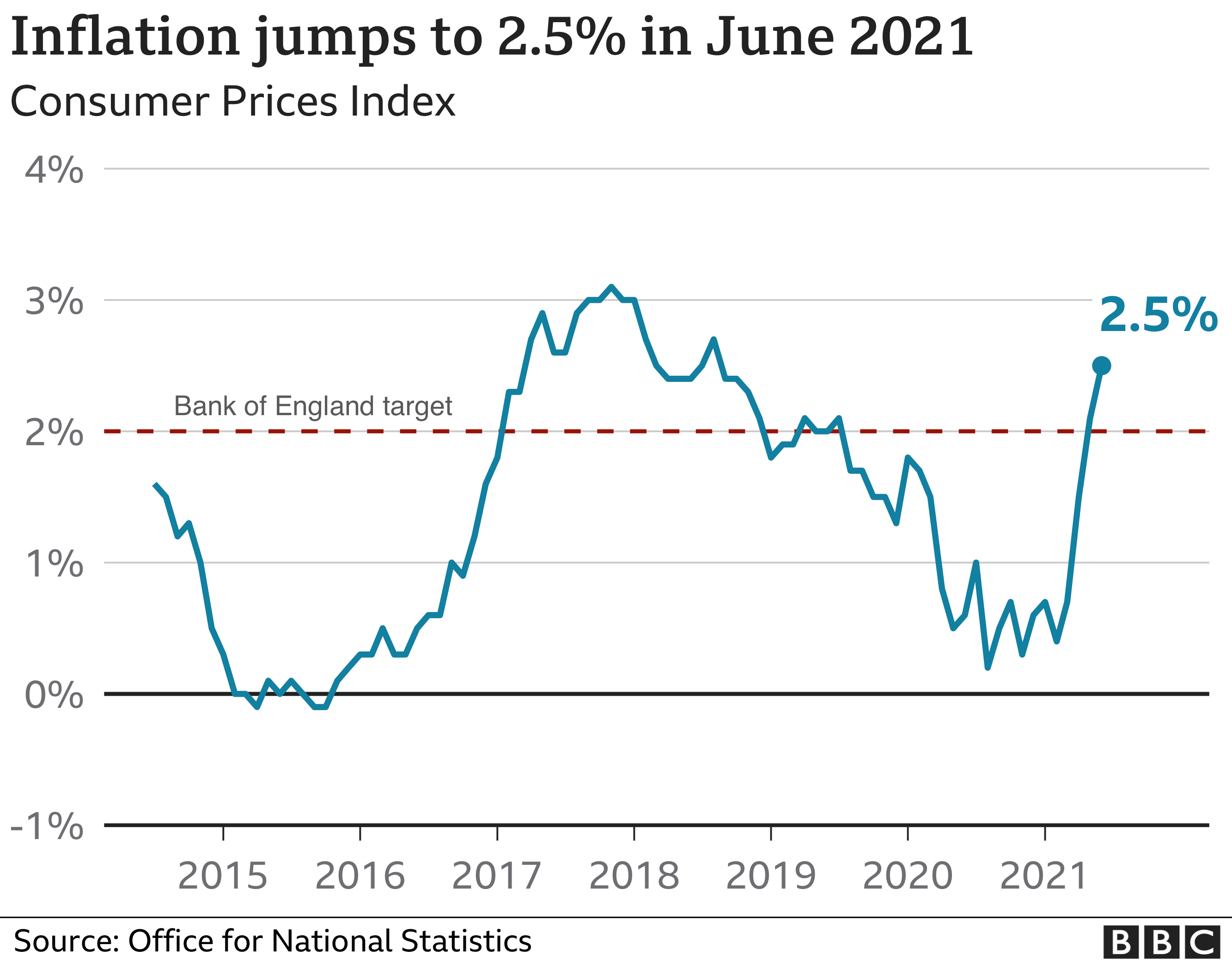 The UK inflation rate hit 2.5% in the year to June, the highest for nearly three years, as the unlocking of the UK economy continued.

The Consumer Prices Index measure of inflation rose from 2.1% in May, the Office for National Statistics said, driven by higher food and fuel costs.

The rate is higher than the Bank of England’s 2% inflation target for a second month.

That will fuel the debate about whether interest rates need to go up.

Simply put, inflation is the rate at which prices are rising – if the cost of a £1 jar of jam rises by 5p, then jam inflation is 5%.

It applies to services too, like having your nails done or getting your car valeted.

You may not notice low levels of inflation from month to month, but in the long term, these price rises can have a big impact on how much you can buy with your money.

As well as food from shops, eating and drinking out also cost more, while clothing and footwear, usually cheaper at this time of year, went up in price instead.

Second-hand car prices rose between May and June this year, whereas in recent years, they have fallen between these months, the ONS said.

Some buyers were reported to have turned to the used car market as a result of delays in the supply of new cars caused by the shortage of semiconductor chips used in their production.

June’s reading was above most economists’ forecasts of an increase of about 2.2%.

ONS deputy national statistician for economic statistics Jonathan Athow said: “The rise was widespread, for example coming from price increases for food and for second-hand cars, where there are reports of increased demand.

“Some of the increase is from temporary effects, for example, rising fuel prices which continue to increase inflation, but much of this is due to prices recovering from lows earlier in the pandemic.

“An increase in prices for clothing and footwear, compared with the normal seasonal pattern of summer sales, also added to the upward pressure this month.”

The latest rise in the inflation rate will add to pressure on the Bank of England to consider increasing interest rates to cool the economy.

The Bank’s rate-setting Monetary Policy Committee (MPC) has taken the view that the current inflation surge is “transitory” and will fall back after peaking at 3%.

But the Bank’s departing chief economist, Andy Haldane, warned last month that the risk of high inflation was “rising fast” and could reach nearly 4% this year.

Samuel Tombs, chief UK economist at Pantheon Macroeconomics, sided with the MPC majority view that inflation was likely to reach 3%, but not much higher.

Interest rates would therefore remain at the current record low of 0.1% “throughout next year”, he said.

Inflation would “ease quickly in 2022”, returning to the Bank’s 2% target “in the second half of next year”, he forecast.