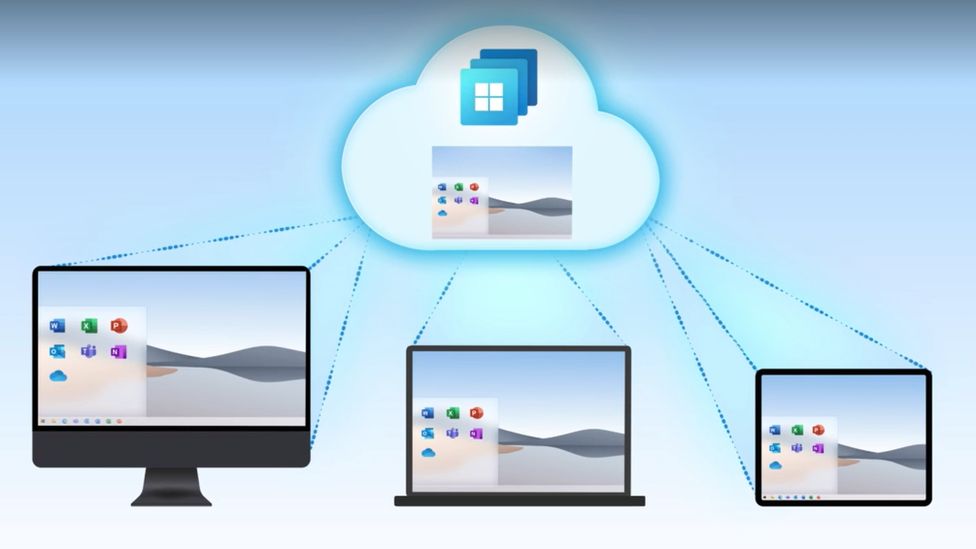 Microsoft has announced a new “cloud PC” product where users can stream a Windows device from anywhere.

Windows 365 will work similarly to game streaming – where the computing is done in a data centre somewhere remotely and streamed to a device.

That means all sorts of devices – including tablets or Apple Macs – can stream a full Windows desktop PC.

It is being sold to businesses to begin with, as many firms move to a mix of office and remote working.

Microsoft is marketing the new way of using a PC as “hybrid Windows for a hybrid world”.

The company says that every user’s apps and settings will boot instantly from any device – allowing personalised Windows PCs to be accessed from anywhere.

“The Windows experience is consistent, no matter the device,” the announcement promised.

“You can get the same work done on a laptop in a hotel room, a tablet from their car between appointments, or your desktop while you’re in the office.”

It will launch in August for business customers “of all sizes”, Microsoft said. To begin with, it will stream a version of Windows 10 – but the successor, Windows 11, will also be available once it launches.

There is no news on whether a personal product will follow. However, Microsoft has been moving towards a subscription model for its man services for nearly a decade.

Microsoft Office began marketing subscription licences with Office 2013, which was launched alongside Office 365, as the subscription version is known. It now makes more money than its single-purchase desktop-bound version.

Similarly, Microsoft has been championing the ongoing subscription model in its gaming division. Its Xbox Games Pass service has largely won over sceptical gamers, providing a range of titles to download and play for a monthly fee. It has recently added game streaming, using similar technology to this new version of Windows.

The downside to such services is that their long-term cost for individuals is often much higher than a one-off purchase.

Microsoft has also dramatically lowered the price of Windows for many customers. Where once it was sold on discs at computer stores for a significant cost, the company has offered customers free upgrades from one version to another for many years, and will do the same for Windows 11.

Instead, Microsoft has sold Windows-related products such as OneDrive cloud storage and Office 365 subscriptions.