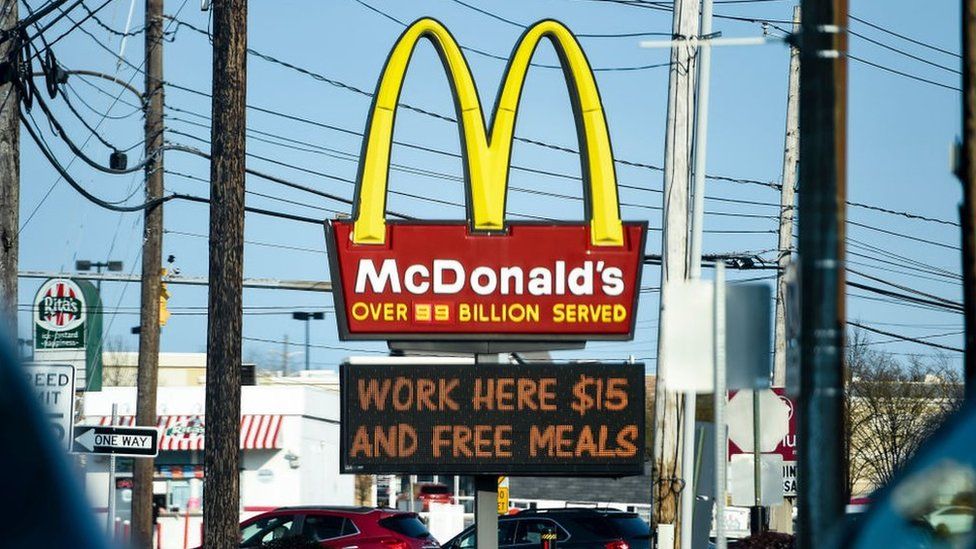 McDonald’s restaurants will offer higher hourly wages and help with education costs to attract workers as Covid restrictions ease in the US.

McDonald’s is one of the many hospitality businesses that laid off staff during the pandemic but has since struggled to hire as America opens up.

The majority of its restaurants are owned by franchisees, who are offering the benefits, with some help from McDonald’s, which owns the brand.

It said it was responding to feedback.

The new plan, or “Employee Value Proposition” – which is intended to improve the experience of working at McDonald’s restaurants – is based on the responses of 5,000 its workers and managers.

Franchisees own about 93% of the 38,000 McDonald’s restaurants worldwide. And some of those restaurant owners in the US will pilot new perks that include the provision of emergency child-care if employees are called in at the last minute.

As first reported by the Wall Street Journal, franchisees started looking at the pay and benefits they offer their US workers last year.

Owners agreed in June to boost pay and benefits and the plan has since been endorsed by the National Franchise Leadership Alliance (NFLA) – a body which represents thousands of US franchisees.

Individual restaurants are now adopting it. They include one franchise owner in Colorado who is spending more than seven figures on wage and benefit increases, according to the burger giant.

David Costa of the NFLA said it would help McDonald’s and its franchisees “remain employers of choice in today’s increasingly competitive hiring environment”.

McDonald’s in May announced it would also increase wages at its company-owned restaurants to an average of $15 per hour by 2024. That followed significant pressure from campaign groups such as ‘Fight for 15’.

Other fast food chains in the US, including Chipotle, have introduced higher hourly rates. Meanwhile, some Burger King restaurants are offering sign-on bonuses as a sweetener for new recruits.

Surveys have suggested that some people are hesitant to re-enter the workforce because of healthcare risks, child-care issues and unemployment benefits.

Under the $1.9tn coronavirus rescue package that President Joe Biden signed into law in March, some workers can get a $300 weekly supplemental benefit if they are out of a job.

But at least 25 states opted to cut that unemployment benefit prematurely, so people are not persuaded to stay at home.

As part of its decision on when and how to tackle the rising cost of living, the Federal Reserve is monitoring unemployment and wage increases as supply in the labour market remains tight.

But Fed chair Jerome Powell has played down worries, saying that rising costs reflect “transitory factors” as the economy reopens and that it was important to continue support as the recovery from the Covid crisis is still underway.

“The economic downturn has not fallen equally on all Americans, and those least able to shoulder the burden have been hardest hit,” he said in June.