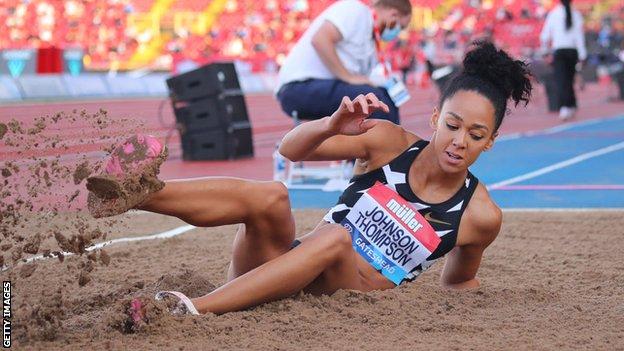 The 28-year-old has been restricted to one previous high jump outing in 2021 because of a ruptured Achilles tendon.

Johnson-Thompson’s mark is well short of the 6.77m she recorded en route to gold in Doha in 2019.

“It’s always tough. Each week there’s been a new challenge,” she said.

“I’m glad I was able to get a full five jumps out and not get a reaction. It shows that my body can handle it.

“I’m improving every week. Every week I can see changes, I can see improvements.

However, with the Olympic Games opening ceremony just 10 days away, she is running out of time to recover her title-winning form after a long lay-off.

Johnson-Thompson, who had coach Bertrand Valcin alongside her, will compete again in France this weekend.

With defending Olympic champion Nafi Thiam warning at the start of the month that she is in “really good” form and will be “hard to beat” in Tokyo, hopes of a repeat of Johnson-Thompson’s win in Doha look to be slim.

Asked about her goals for Tokyo, Johnson-Thompson replied: “My goals are always the same. My goals are to get to the start line confident and healthy, and I’m slowly getting there, for sure.”

Trayvon Bromell, the fastest man in the world this year, won the men’s 100m.

The 26-year-old American, who spent three and a half years battling injury in the wake of Rio 2016, was a commanding winner in 9.98 seconds, ahead of British duo CJ Ujah and Zharnel Hughes in 10.10 and 10.13 seconds respectively.

Holly Bradshaw was edged out by American world and Olympic silver medallist Sandi Morris in the pole vault, managing a best clearance of 4.71m.

“I started jumping really well towards the end so I am pleased with that and how things are looking going forward,” she said.

Jamaica’s defending Olympic champion Elaine Thompson-Herah won the 200m in the absence of Britain’s Dina Asher-Smith, who withdrew on Sunday as a precaution after her hamstring tightened up.

Without Asher-Smith to push her to the line, Thompson-Herah’s time was a leisurely 22.43.

However, she was only the third fastest in her national trials last month with Shelly-Ann Fraser-Pryce and Shericka Jackson making a formidable Jamaican threat to world champion Asher-Smith.

Jodie Williams, who has opted to focus on the 400m rather than double up, finished second behind Thompson-Herah but ahead of Nigeria’s former world medallist Blessing Okagbare.

The Briton’s decision seemed vindicated when she clocked a personal best 50.94 seconds for second behind Jamaica’s Stephenie Ann McPherson in the 400m.

Cindy Sember, another of Britain’s medal prospects, looked slick and swift in winning the 100m hurdles in 12.69 seconds, while Andrew Pozzi was third over the 110m hurdles behind Jamaican duo Ronald Levy and Omar McLeod.

Elliot Giles, stepping up from his usual 800m, beat British rival Jake Heyward by a hundredth of a second to win the Emsley Carr mile in 3:52.49.

Fast-rising Dutch star Femke Bol racked up another victory in the 400m hurdles before Great Britain’s 4x100m quartets got a competitive outing.

Nethaneel Mitchell-Blake and Richard Kilty combined well with Ujah and Hughes to set a world-leading time of 38.27 seconds.