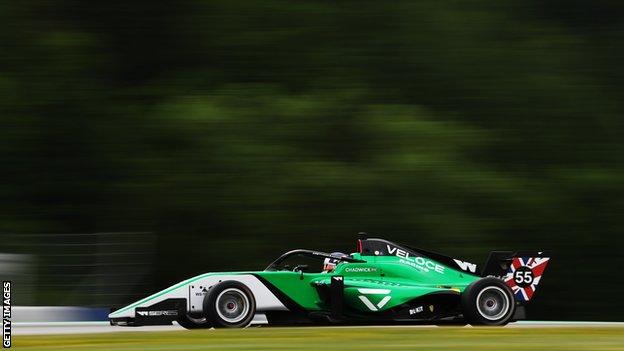 Jamie Chadwick is the current W Series champion and development driver for the Williams Formula 1 team – the 23-year-old talks to BBC Sport about the highs and lows of trying to get on the F1 grid in an exciting year back in Extreme E and back in the W Series, which is supporting the F1 British Grand Prix at Silverstone this weekend

What a week for sport. I mean, it didn’t go well… I watched the final of the Euros with a couple of friends. I think there was a false sense of security with the early goal, I got way too excited. And then heartbroken.

Overall we did well – beating Italy was always going to be a big ask. I’m just concerned that’s it for another 55 years.

I actually went to Wembley for the semi-final against Denmark – that was unbelievable. Honestly, it was possibly one of the best sporting events I’ve ever been to. Apart from the Indy 500. The atmosphere was unbelievable. My ears after that were not in their finest force.

Indy, though… I’m biased, being a motorsport fan; but there are 300,000 fans there. Watching that race, and the speeds they go, is insane anyway. But Americans do put on a good show.

It’s just the roar of the crowd – every lap. The really cool thing is the contrast between the silence after the national anthem – 300,000 people and you can hear a pin drop. Then the start of the race and every lap they cheer relentlessly.

To be racing with W Series on a British GP weekend at Silverstone is really exciting. In terms of preparation it’s the same, without a lot of the travel, which is actually quite nice. Thursday will be my first day at the track, and Friday in the car for qualifying and the race on Saturday – so it’s over before you know it.

My best British Grand Prix memory is 2016. Lewis Hamilton won it. I went, and ended up in Williams’ garage because I knew someone there. It was before I was affiliated with them, and I saw what I think was the fastest pit stop that had ever been done at the time. It is a massive highlight – it was the first time I’d been in the F1 paddock.

I can’t wait to see what it will be like this time. With British motorsport fans, we’re lucky – we’ve got such a strong fanbase for our sport.

At Brands Hatch in 2019 [where she won the W Series title] out of all races we did it was the biggest, and it did feel like it had more of a sense of occasion – no doubt Silverstone will be massive step up, though.

And it’s really exciting to know it will be full capacity and everyone can attend without any restriction – it’s a massive added bonus, and makes me more hungry to get a result.

Every time you get in the car the set objectives and what you do is the same. But the sense of occasion and the feeling of people turning up and knowing more people in crowd than normal support you makes a difference.

But when you are actually in the car you don’t necessarily hear it. I notice it when my Instagram posts get more likes than normal!

Brands was the first time I had been hounded constantly walking from the paddock to garage. I never had anything like that in my whole career.

Not feeling the pressure

I don’t feel the pressure going back into W Series – I’ve done it before and I can do it again. I have a lot of experience from last year [in Formula 3] and felt quite content with what I need to do – as long as I follow the process it’s all going to be OK.

In terms of competitive edge, the parameters in the W Series are quite small. There are set-up changes available, but everyone can see the data of how you are driving. You can’t get too wrapped up in car set-up or you find yourself in rabbit holes.

It’s often about adapting to what you have got at the time. I’ve not always been good at that in the past – I always liked having the car dialled in, but the W Series and Extreme E has helped me with that.

Hamilton, for example, is exceptional at looking after his tyres, but that’s not quite as critical in one 30-minute race. It’s more important to be able to be the first one to start changing your driving style and adapting because the weekend’s over pretty quickly.

If I win the W Series title this year, that would be technically enough super-licence points for me to do a free practice session in F1.

But that’s not a priority for me at the moment. If I don’t win or do well, I won’t be stepping up into F1 anyway.