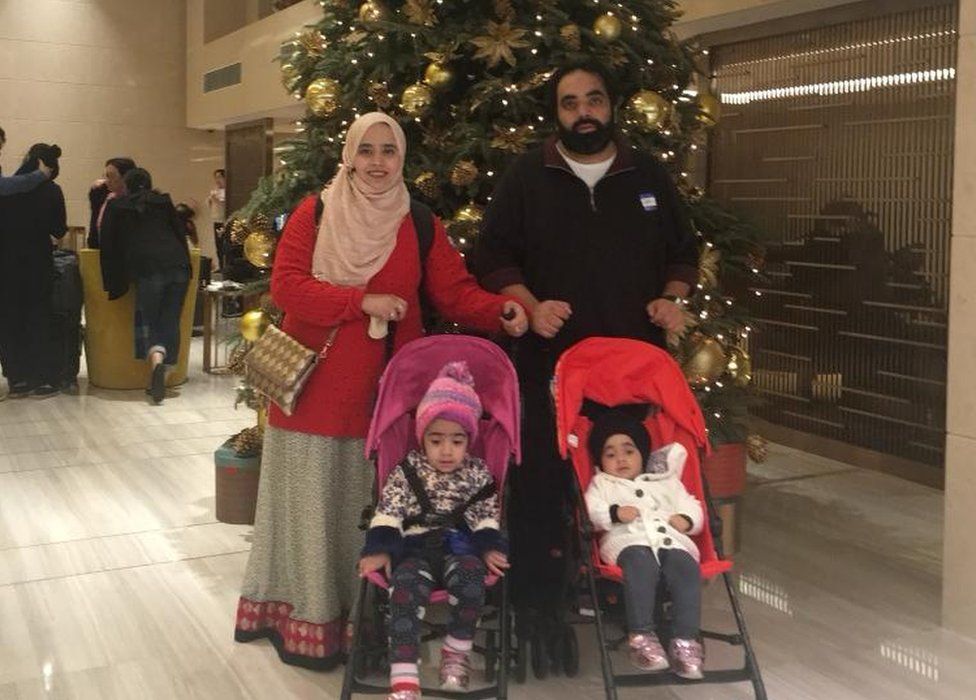 India’s devastating second Covid wave has left thousands of families reeling from unspeakable grief. Each ordeal is a story of how neglect, unpreparedness and a poorly thought-out vaccine strategy has resulted in so many deaths. Here is Altuf Shamsi’s story in his own words, as told to the BBC.

In early April, we were a happy family. My wife Rehab and I were expecting our third child.

Our gynaecologist had advised us to come to the hospital no later than 22 April. The plan was to have the baby the next day as Rehab was already in the 38th week of her pregnancy.

She took a Covid test as per protocol – but, to our shock, the result returned positive. We knew the hospital did not admit Covid positive patients, but our gynaecologist suggested we postpone the delivery as Rehab still had some time. She said we should focus on getting her treated for Covid.

A few days later, Rehab developed a high fever and on 28 April, we admitted her to a Covid hospital on her doctor’s advice.

The next day, the doctor said we could lose the baby since Rehab was on strong medication. In the evening, her condition worsened and she was put on oxygen support. Doctors decided to deliver the baby through an emergency C-section.

The hospital made us sign documents which said that there were high chances of her bleeding to death. It was like jumping off a cliff and hoping that you will land safely.

The hospital also asked me to find an ICU bed in another hospital as Rehab was likely to be intubated after the surgery – and would need a full-fledged Covid treatment, which they couldn’t provide.

At this point, I forgot that we were having a baby. The only thing on my mind was to save Rehab.

While I was preparing myself mentally for the surgery, bad news arrived. My father, who had also tested positive and had been admitted to another hospital in Delhi, was deteriorating.

My mother, also positive, was still at home on mild oxygen support. She didn’t even know that her husband and daughter-in-law were battling for life.

My world seemed on the verge of collapsing. I was praying for their recovery, while hunting for an ICU bed.

On 29 April, my baby girl was born. The hospital moved Rehab to a makeshift ICU since I hadn’t been able to find a place elsewhere.

The hospital did not have enough nurses and by now, I was Covid positive too, but I decided to take the risk and stay by Rehab’s bedside. I had to constantly remind the nurses about her medication. They kept telling me to move her elsewhere. I called everyone I knew to find a bed with a ventilator.

Finally, I found an ICU bed, but there was no ambulance with life-support available to move her. I pleaded with the hospital to keep treating her and they did everything they could to save her.

I will never forget 1 May. Several hospitals were reporting a severe shortage of oxygen. The staff at the hospital where Rehab was admitted said they were also close to running out of oxygen and asked me to arrange for cylinders.

In the evening, I got a call from my father’s hospital that he was deteriorating fast. By the time I reached there, he had died.

I was numb. I was looking at his body, while reading SOS messages from Rehab’s hospital for oxygen. My mother was also not doing well and my two daughters – seven and five – were asking why their mother was not yet home with their new sibling as promised.

I had the difficult task of telling my mother that her partner of 42 years was gone. He was the family’s protector. With him gone, I felt more vulnerable.

I buried him and rushed back to Rehab’s hospital to find her condition also deteriorating.

For the next 11 days, I kept swinging between hope and despair. Every day, I was told that Rehab was doing slightly better but was still critical. Two days later, her kidneys needed support and she was put on dialysis. But as her oxygen saturation started to improve, I was told to leave the ward. I was told I could see her after two days when they planned to take her off the ventilator.

Later the same day at around 8pm, the private nurse I had hired to be with Rehab told me that her vitals were stable. I went home to check on my mother and my daughters. At 11pm, the hospital called, asking me to return immediately. With my heart pounding, I rushed back, but by the time I reached, Rehab was no more.

The hospital staff told me that there was “a cardiac issue”. I was completely broken. I was trying to be strong, taking care of my family, and I was hoping to see my wife and talk to her the next day. But now my world, which had been on the verge of collapse, had shattered.

The only thought I had was how was I going to tell my girls that their mother was never coming home? I still haven’t told them. I just don’t know how to do this. They ask me every day about her and I tell them that she is still in the hospital. My sister is helping me look after the new baby.

Rehab was not just a wonderful woman, but a loveable and caring mother, wife, daughter and daughter-in-law. She was fearless and confident and that is why she fought so hard. She didn’t get to see our newborn baby, but I am going to treat her as a gift that Rehab has left for us. I am trying to be a father and a mother to my girls, but I can never fill the vacuum Rehab has left in our lives.

I keep thinking is there something more I could have done to save her? Would she have lived if I’d found a better hospital?

There are no easy answers, but I definitely believe that access to Covid vaccines can save many women like Rehab. She may have survived if she had been vaccinated. But no vaccine was available for her and the government is yet to approve a jab for pregnant women who are at risk of getting severe Covid.

I lost the shining light of my life and I don’t want anyone else to go through what I went through.

Goodbye Rehab, I will see you on the other side.

As told to the BBC’s Vikas Pandey