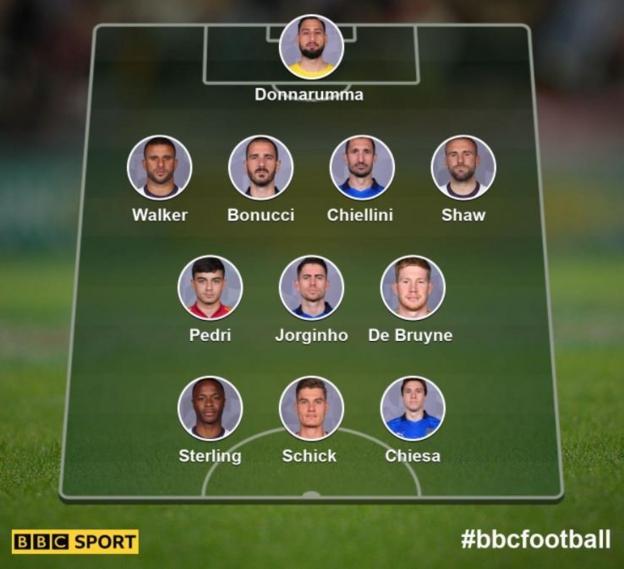 No Cristiano Ronaldo, no Paul Pogba, no Romelu Lukaku.

As the dust settled after Euro 2020, we asked you to pick your team of the tournament – and the results are in.

Italy’s penalty shootout hero Gianluigi Donnarumma – the official player of the tournament – was the overwhelming selection in goal, with 62% of the vote. He beat England’s Jordan Pickford, Denmark’s Kasper Schmeichel and Wales’ Danny Ward to the number one spot.

All four defenders selected played in the final, with England full-backs Luke Shaw (48%) and Kyle Walker (29%) either side of Italy central defenders Leonardo Bonucci (37%) and Giorgio Chiellini (33%).

England centre-back Harry Maguire missed out, being selected in 25% of teams.

Italy midfielder Jorginho (30%), Spain teenager Pedri (13%) and Belgium’s Kevin de Bruyne (12%) made up the trio in the middle of the park, with no space for players such as France’s Paul Pogba, the Netherlands’ Georginio Wijnaldum and Switzerland’s Granit Xhaka.

That put Schick in the team alongside England’s Raheem Sterling – who with 35% was the most-picked player in the front three – and Italy’s Federico Chiesa (24%).

Any teams picked now won’t affect the results, but you can still select yours for a bit of fun: