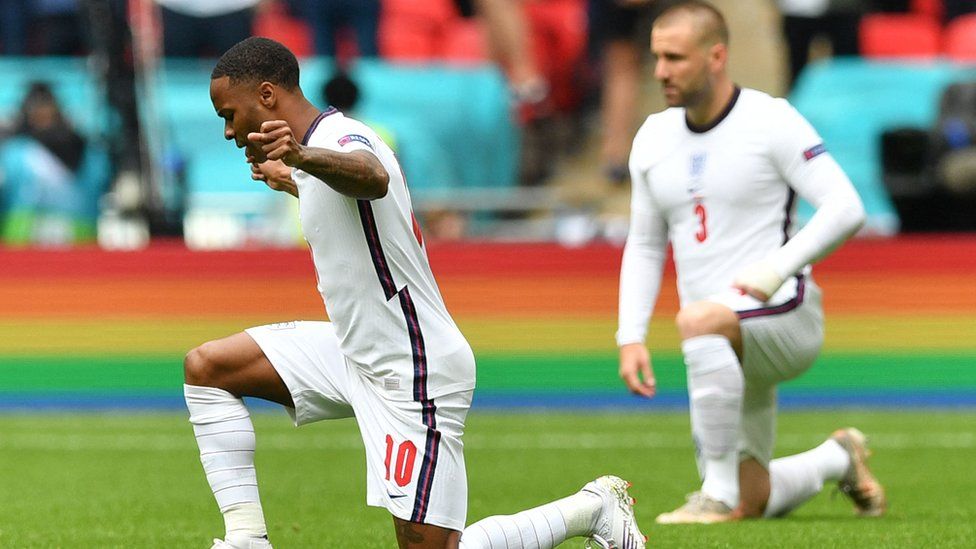 Conservative MPs need to change their attitude and support footballers who take the knee, a senior figure on the right of the party has said.

Steve Baker told the BBC players were not calling to “defund the police” or being “anti-capitalist” – they were saying “we suffer racism”.

Other Tories have criticised players for making the protest before games.

On the eve of the Euro 2020 tournament, education minister Gillian Keegan said the Black Lives Matter campaign “is really about defunding the police and the overthrow of capitalism” – and taking the knee was “creating division”.

Asked in June if she would criticise fans who booed England players taking the knee Priti Patel said: “That’s a choice for them, quite frankly.”

Boris Johnson has said he wants fans to cheer their team, but has not explicitly condemned fans who booed, prompting criticism from Labour leader Sir Keir Starmer.

On Monday, the home secretary tweeted that she was “disgusted” by the online abuse directed at some England players, after the team lost to Italy on penalties in Sunday’s Euro 2020 final.

England footballer Tyrone Mings replied that she had “stoked the fire” through her stance on taking the knee.

Responding to Mings, Conservative MP Johnny Mercer said: “The painful truth is that this guy is completely right.”

He added he was “very uncomfortable with the position we Conservatives are needlessly forcing ourselves into”.

Steve Baker, who chaired the pro-Brexit European Research Group of Tory MPs, said the controversy should serve as a “wake-up call” to the Conservative Party over how it is seen in the rest of the country.

Mr Baker said he would not take the knee himself, as its connection to BLM meant its symbolism was subject to “multiple competing interpretations”.

But he added that he thought footballers were motivated by a desire to express their “solidarity with those who suffer racism”.

“We just have to get alongside those players who are taking the knee, and understand they are not saying ‘defund the police’, they’re not anti-capitalist,” he told BBC Radio 4’s Today programme.

Labour will also urge the government to take stronger against racist abuse on social media at a Commons debate later.

The party wants tough sanctions for executives at companies that fail to enforce rules on online hate, and tweaks to legislation to allow courts to ban fans from football games for posting abuse online.

More than a million people have signed an online petition calling for tougher rules to ban abusers from attending games.

The government says its Online Safety Bill will do more to force social media companies to act on abuse online.

American footballer Colin Kaepernick started kneeling during the pre-game national anthem in the NFL in 2016, in protest at police violence against African-Americans.

Many figures in sport started taking the knee last year, when the Black Lives Matter movement gained momentum in the wake of the murder of George Floyd by a police officer in the US.