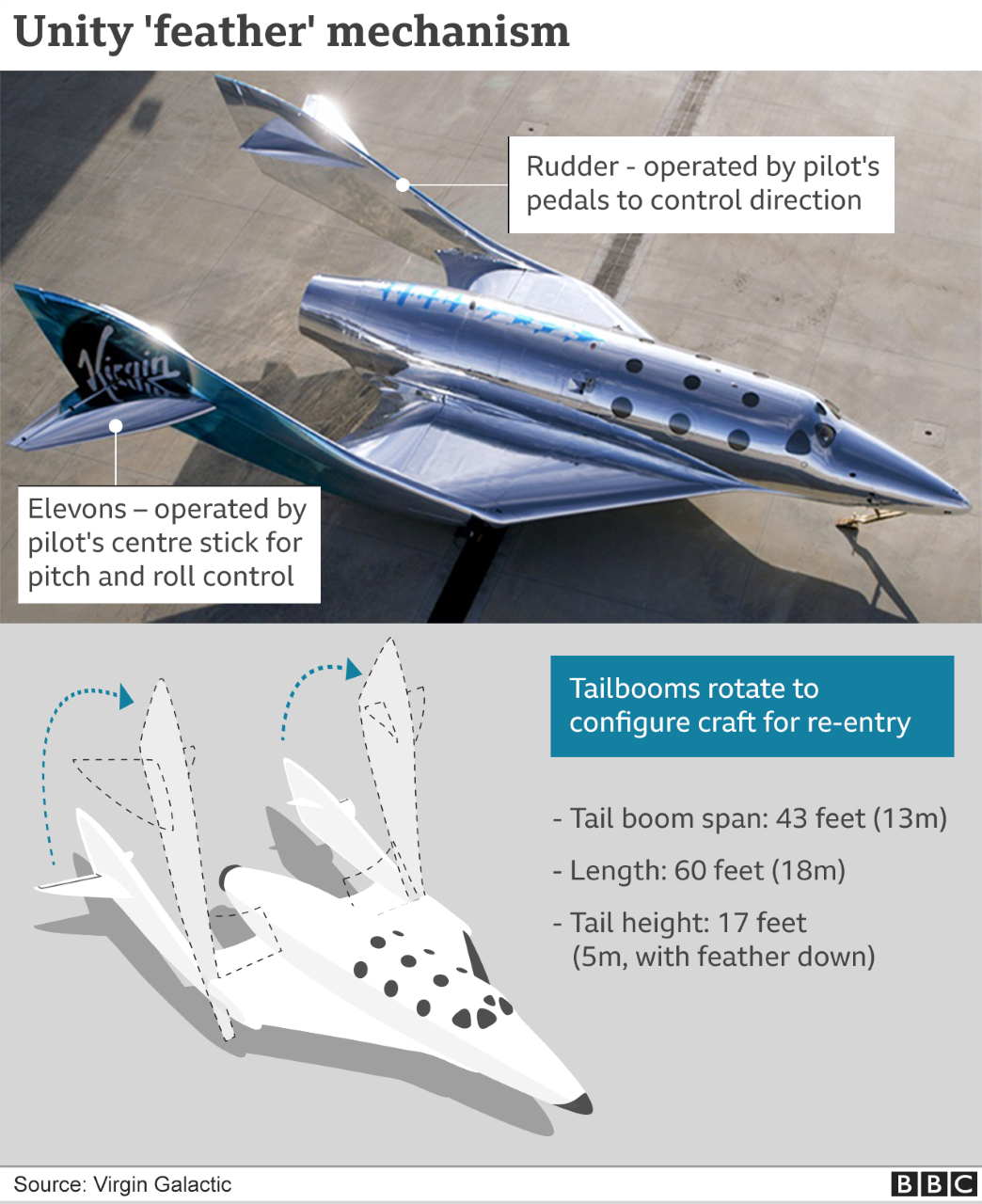 For more than 15 years, Virgin Galactic has been working to begin carrying paying passengers to the edge of space and back. Here, we track the long, winding road to realising Sir Richard Branson’s dream.

In the early 1990s, celebrated aeronautical engineer Burt Rutan set himself a challenge: designing a spaceplane.

“I’m going to give it a try, I’m going to go out and do it,” Mr Rutan said in 2004, recalling his thoughts a decade earlier.

Like many before and since, he was motivated by the lack of access to space for “ordinary” people – in other words, those who aren’t government-funded astronauts.

“Over the last 25 years it has become increasingly, increasingly obvious that the kids who dream – and I consider myself still a kid – that they can go up and see these views [of Earth from space] have diminishing hope, diminishing dreams,” Rutan explained.

The engineer thought the ride would have to feel like flying in a plane, rather than the more adventurous experience of being launched on a rocket and falling to the ground with parachutes.

The outcome of his efforts was a vehicle named SpaceShipOne. Rutan took inspiration from the X-15 high-altitude experimental plane flown by test pilots in the 1950s and 60s

The 8.5m-long spacecraft began its flight from a runway in California’s Mojave desert, slung under a plane called White Knight. At 14km up, SpaceShipOne detached from its “mothership” and immediately ignited its rocket engine.

The vehicle, carrying test pilot Mike Melvill, then climbed steeply, eventually reaching an altitude of just over 100km – the official boundary of space.

Melvill experienced weightlessness before the vehicle re-entered the atmosphere. On the way down, SpaceShipOne changed shape as planned, in a way designed to increase the drag – air resistance – while maintaining the craft’s stability. This was known as the “feathering” system.

Over the course of several more successful flights, the vehicle also won the $10m X-Prize, set up by space entrepreneur Pete Diamandis, to help kickstart a space tourism industry.

Members of the public had been invited to marvel at the flights, but they weren’t the only ones who were impressed by the vehicle’s achievements.

Sir Richard Branson, founder of the Virgin group of companies, had also been paying close attention, and he was about to bet big on the spacecraft and its technology.

In September 2004, Sir Richard announced that he would offer commercial flights to space using vehicles based on SpaceShipOne.

At a news conference in London, the British entrepreneur said a seat aboard his new Virgin Galactic spaceline would set customers back $200,000.

Flanked by Burt Rutan, Sir Richard said: “We hope to create thousands of astronauts over the next few years and bring alive their dream of seeing the majestic beauty of our planet from above, the stars in all their glory and the amazing sensation of weightlessness.”

Shortly after the announcement, Mr Rutan and Sir Richard set up The Spaceship Company to own the technology developed by Rutan’s firm Scaled Composites for Virgin Galactic’s space tourism business. At the time, Virgin planned to have people riding to space by 2007.

But this rocket ship was to be more than a mere refinement of SpaceShipOne. While the craft that had won the X-Prize was set up to carry just a pilot, Sir Richard wanted to send eight people at a time – six passengers and two pilots – on sub-orbital trips.

This would require Virgin’s rocket ship to be much bigger than its predecessor – and also necessitate changes to the carrier plane, White Knight. Engineers also set about developing a more powerful rocket motor to send the craft to the edge of space.

In September 2006, two years after the conference in London to announce Virgin Galactic, Sir Richard unveiled a mock-up of SpaceShipTwo’s cabin in New York.

Virgin Galactic was to repeat this kind of event many times down the years, allowing journalists and other visitors to swarm over the replica. The company would point out features such as the windows that would give the occupants a spectacular, panoramic view of the stars above and our planet stretched out below them.

They explained how paying passengers would be able to unbuckle from their seats and perform somersaults in microgravity. It all painted an impressive picture of the experience for paying customers. But things were not always so upbeat behind the scenes.

In July 2007, tragedy struck when three employees of Scaled Composites were killed and three more badly injured in an explosion while testing components of the rocket motor for SpaceShipTwo.

After the accident, Scaled Composites outsourced development of the motor to another company, Sierra Nevada Corporation.

The vehicle’s rocket motor was designed to use a solid, rubber-based fuel called HTPB and liquid nitrous oxide as an oxidiser (a chemical that helps the fuel burn). This design, with propellants in different phases – solid and liquid in this case – is known as a hybrid rocket motor.

It needed to be capable of sustaining a stable burn for at least a minute.

The first SpaceShipTwo craft, called VSS Enterprise, started a programme of testing in 2010. This kicked off with ground tests, followed by captive-carry flights, where it flew attached to the White Knight II carrier plane, but was not released.

Then, in October the same year, it was dropped mid-air by its carrier for the first time and glided to a safe landing at the Mojave Air and Spaceport.

The first powered flight of VSS Enterprise was to come in April 2013. Piloted by Mark Stucky, with Mike Alsbury as co-pilot, the vehicle reached supersonic speeds above the Mojave desert.

At the time, Sir Richard commented: “Today’s supersonic success opens the way for a rapid expansion of the spaceship’s powered flight envelope, with a very realistic goal of full space flight by the year’s end.

“We saw history in the making today and I couldn’t be more proud of everyone involved.”

However, Virgin Galactic wasn’t happy with vibrations coming from the engine prototypes and, in 2014, it ended its relationship with Sierra Nevada, bringing development of the rocket in-house.

The company also announced that it would be changing the rocket’s fuel from a rubber-based one to a plastic-based one called thermoplastic polyamide.

In October 2014, the VSS Enterprise took off from the Mojave spaceport for the craft’s 55th test flight. It was to have tested the new plastic-based fuel.

However, 11 seconds after being released from its carrier plane, the SpaceShipTwo vehicle VSS Enterprise broke apart. Tragically, co-pilot Mike Alsbury was killed.

Pilot Pete Siebold survived the accident with serious injuries. As the craft disintegrated, he released the straps on his seat. As he fell unconscious through the air, his parachute deployed automatically and he landed safely in the desert.

An investigation by the National Transportation Safety Board (NTSB) concluded that one of the vehicle’s feathers, used to slow its descent towards the ground after reaching space, had deployed prematurely. This had caused the vehicle to break up.

After the crash, Sir Richard had promised reporters that if the problem that had caused the crash could be overcome, “we’ll make absolutely certain that the dream lives on”. The second Virgin Galactic spaceplane was unveiled in February 2016. Its name, VSS Unity, was chosen by British physicist Prof Stephen Hawking.

Even though the fatal accident had nothing to do with the engine, Unity would use the rubber-based HTPB fuel originally envisaged by engineers.

After a number of glide and powered flights, Unity reached the edge of space for the first time on 13 December 2018. The spacecraft surpassed an altitude of 80km – regarded as outer space by some organisations.

Sir Richard finally took up his seat aboard VSS Unity in July 2021, in a flight that reached an altitude of about 85km.

However, the most widely recognised boundary where space begins is the Karman line, 100km above ground. This is the mark acknowledged by the Fédération Aéronautique Internationale (FAI), the record-keeping body for astronautics.

Sir Richard’s rival in the space tourism business, Amazon founder Jeff Bezos, has sought to make capital from the fact that his vehicle – New Shepard – will carry passengers above the Karman line.

From the beginning, New Shepard was designed to fly above the Kármán line so none of our astronauts have an asterisk next to their name. For 96% of the world’s population, space begins 100 km up at the internationally recognized Kármán line. pic.twitter.com/QRoufBIrUJ

However, others point out that it makes little difference from the point of view of the customer’s experience. They will still experience weightlessness, and float free while they look at the spectacular views.

For some of those with the spare cash, that alone will justify the price tag.