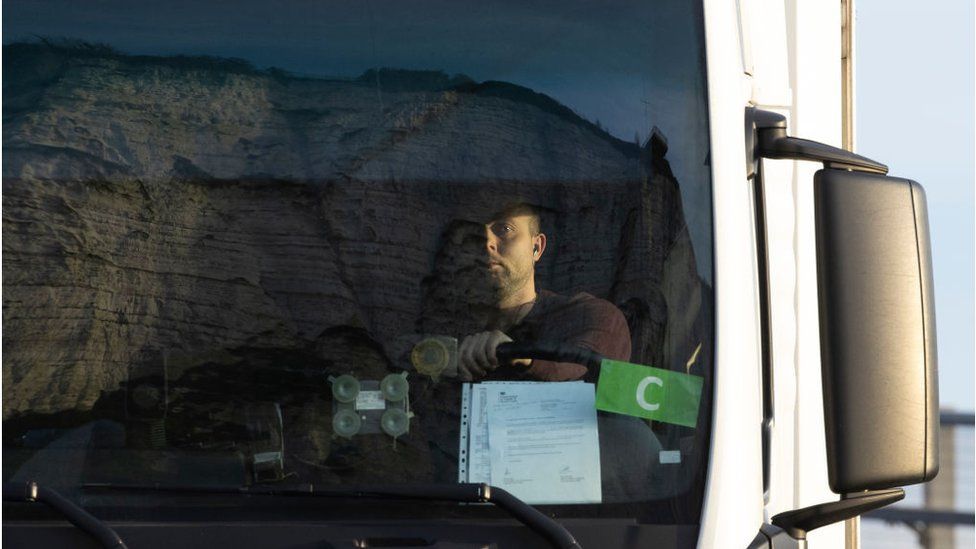 The government has explored ways to address a shortage of haulage workers, including creating a short-term visa scheme for foreign lorry drivers, the BBC understands.

A combination of the Covid pandemic and Brexit has left haulage firms struggling to recruit drivers.

Different government departments have discussed options with the industry, including bringing in such visas.

But the Home Office said there are no plans to introduce the visas.

The industry is pushing for drivers to be added to the so-called Shortage Occupations list, allowing them to qualify for a skilled worker visa.

“We need long-term solutions to recruit a new generation of British lorry drivers into the trade, but short-term there is an urgent need for foreign drivers to be allowed in, under the Shortage Occupations list,” said Rod McKenzie, managing director of policy at the Road Haulage Association (RHA).

The government wants the industry to employ British hauliers.

But the industry said that it was impractical in the short term because of the immediacy of the need and the training costs involved.

Last week, transport minister Baroness Vere said she had discussed this issue with the haulage sector two years ago, adding: “It was very clear then that foreign labour would not be available to it.”

Nevertheless, with the training for an HGV driver typically taking six to nine months, people within the industry insist urgent action is needed to overcome the immediate crisis.

Businesses have warned that as the economy reopens, a lack of drivers is jeopardising deliveries to retailers and pushing up prices for consumers.

The sector is suffering from the impact of the pandemic, which prevented thousands of new drivers from taking their tests last year.

At the same time, many foreign hauliers returned home when work dried up during the early stages of the Covid outbreak and have since been unable to return because of immigration rules brought in after Brexit.

The RHA estimates that there is currently a shortfall of about 60,000 hauliers and said that the situation for food supplies was “close to a crisis point”.

There was a risk that some items would run out in supermarkets at certain times in a way similar to “rolling blackouts” for electricity, it said.

“We’re seeing a real danger to our supplies in the UK because of driver shortages,” said Mr McKenzie.

With the government set to lift almost all legal restrictions on social contact in England on 19 July, the further opening of the economy could lead to a “day of reckoning”, he said.

While the industry has been increasing wages to try to attract staff, it is limited by slim profit margins, Mr McKenzie said.

It costs thousands of pounds to train up drivers and that is out of reach of many haulage firms and prospective drivers, he added.

“Meanwhile, without a temporary visa for drivers – similar to that recently granted to agricultural workers to pick vital crops – the supply chain will break down,” he said.

However, while that plan has been welcomed by wholesalers, it has faced criticism on safety grounds.