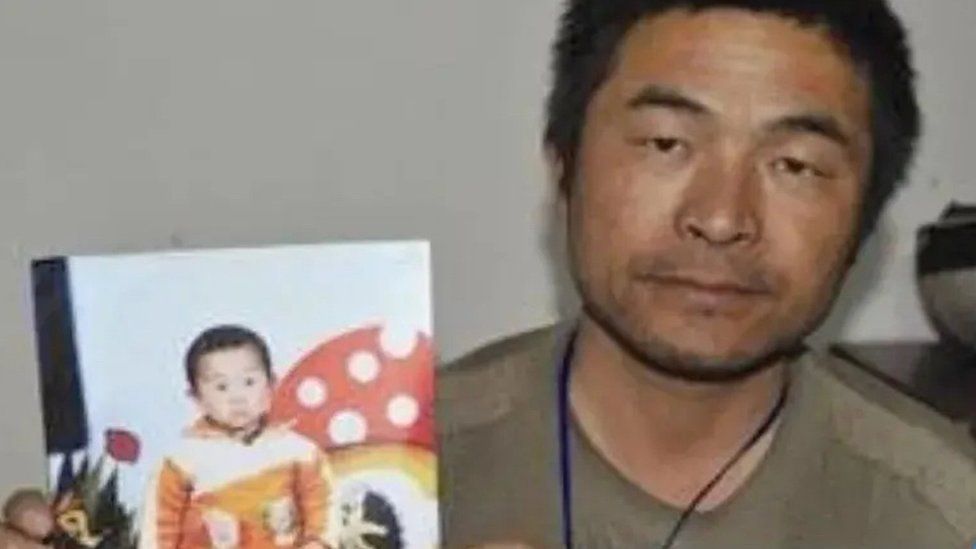 Guo Gangtang’s son had been snatched aged two by human traffickers in front of their home in the province of Shandong.

Child abductions are a big problem in China, with thousands taken every year.

According to China’s Ministry of Public Security, the police were able to trace his son’s identity using DNA testing. Two suspects were later tracked down and arrested, said a Global Times report.

The suspects, who were dating at the time, had planned to kidnap a child with the intention of selling him for money, said a report by China News.

After spotting Mr Guo’s son playing alone outside his home, the female suspect identified only by her surname Tang grabbed him and took him to the bus station, where her partner, named as Hu, was waiting.

The couple then took an intercity coach to neighbouring Henan province and sold him there.

Mr Guo and his wife cried and hugged their son when they were reunited in Liaocheng, Shandong, on Sunday, state media CCTV reported.

“My baby, you came back!” said the mother, whose name was not released, in a video of the reunion.

“Now that the child has been found, everything can only be happy from now on,” Mr Guo told reporters.

Mr Lau, who got to know Mr Guo while preparing to play him in the film Lost and Love, congratulated him.

“I’d like to say to Brother Guo that I admire your persistence,” he said, according to the South China Morning Post.

After his son was abducted in 1997, Mr Guo reportedly travelled to more than 20 provinces around the country on the back of a motorbike chasing tip-offs.

In the process, he broke bones in traffic accidents and even encountered highway robbers. Ten motorbikes were also damaged.

Carrying around banners with his son’s picture on them, he is said to have spent his life savings on his mission, sleeping under bridges and begging for money when he ran out of cash.

He also became a prominent member of missing-persons organisations in China, and helped at least seven parents reunite with their abducted children.

In China, the abduction and trafficking of babies has been a problem for decades.

In 2015, it was estimated that 20,000 children were being abducted each year in China. Many of them are sold into adoption, both domestically and overseas.