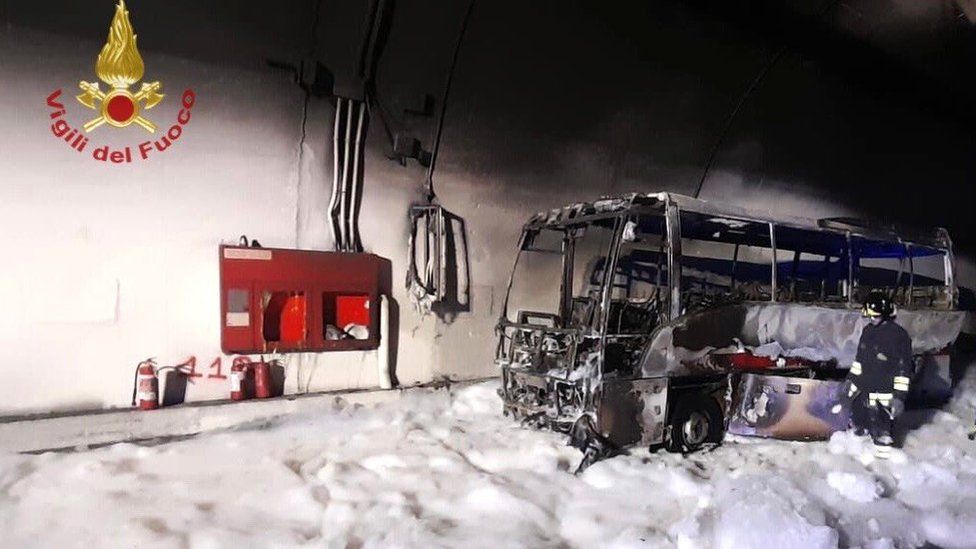 A bus driver in Italy has been praised for getting 25 schoolchildren to safety after noticing a problem with his vehicle before it burst into flames.

The bus, which was transporting youngsters aged between 14 and 16 to a summer camp, caught fire in a tunnel about 50 miles (80km) north of Milan.

Firefighters quickly arrived at the scene and extinguished the flames.

Footage released by the fire department showed smoke billowing out of the tunnel and long queues of traffic.

Seven children were taken to hospital as a precaution for smoke inhalation, the Lecco news website reported.

The president of the Lombardy region, Attilio Fontana, later praised the driver’s quick thinking for pulling over and managing to remove the children from the bus before it was “devoured by flames”.

He also thanked the emergency services.

Five firefighter teams from the Lecco and Bellano provinces in Lombardy were dispatched to the scene after being alerted to the incident at about 10:00 local time (08:00 GMT) on Tuesday.

One firefighter told Italian news agency Adnkronos that the fire may have been caused by a burst tyre.

Roads were closed while rescue operations took place along State Road 36 – a main route connecting Lecco to the Valtellina valley.