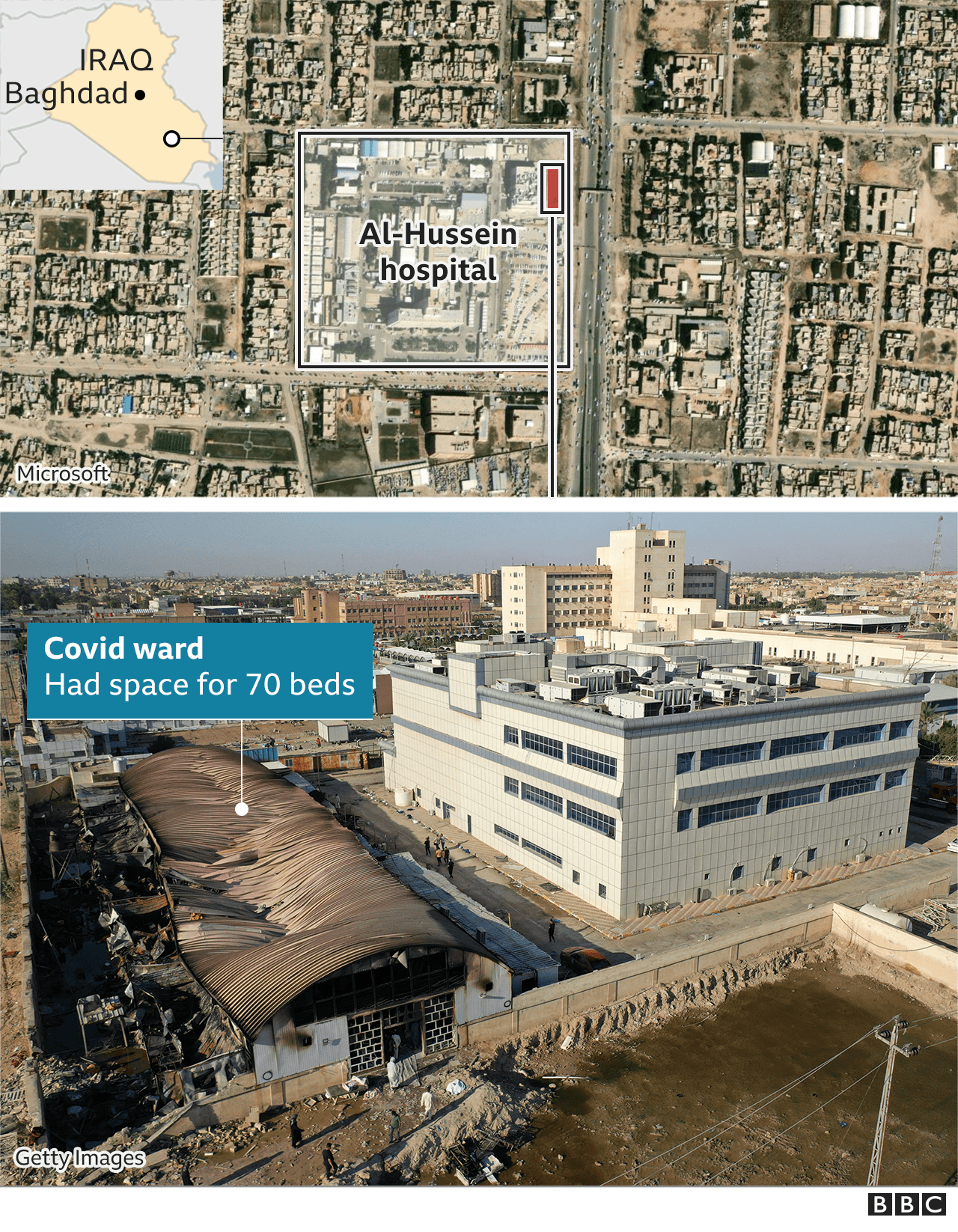 At least 92 people have died after a fire in a Covid isolation ward at a hospital in the Iraqi city of Nasiriya.

Much of Iraq’s healthcare system is in poor condition after years of conflict and angry relatives of the victims have been protesting outside the facility.

Police say the fire at al-Hussein hospital started when sparks from faulty wiring spread to an oxygen tank, causing it to explode.

PM Mustafa al-Kadhimi ordered the arrest of the head of the hospital.

In April a fire at a hospital in Baghdad killed more than 80.

Mr Kadhimi said both fires were “a deep wound in the conscience of all Iraqis”.

The speaker of the Iraqi parliament, Mohammed al-Halbousi, tweeted that the Nasiriya blaze was “clear proof of the failure to protect Iraqi lives, and it is time to put an end to this catastrophic failure”.

The new ward had space for 70 beds and was built just three months ago, medical officials told the Associated Press news agency. A health official said that at least 63 people had been inside when the fire began.

“I heard a big explosion inside the coronavirus wards and then fire had erupted very quickly,” a hospital guard told Reuters. A search operation is continuing.

Oday al-Jabri, who lost four family members and two neighbours in the fire, told AFP news agency he was frustrated and angry.

“I don’t know whether to console my family, my neighbours or my relatives,” he said.

Another relative, Abu Nour al-Shawi, told the agency: “A patient infected with coronavirus is brought here to be treated, but is returned in a coffin along with his family and children. Where [else] would such a thing happen? This building is for animals and even they cannot live in it.”

A medic at the hospital, who spoke to Reuters on condition of anonymity, said the building had lacked even basic safety measures.

“The hospital lacks a fire sprinkler system or even a simple fire alarm,” he said. “We complained many times over the past three months that a tragedy could happen any moment from a cigarette stub, but every time we get the same answer from health officials: ‘We don’t have enough money’.”

Iraq has reported more than 17,000 deaths and recorded 1.4 million infections from coronavirus, according to Johns Hopkins University data.

The country has given at least one dose of a vaccine against Covid to just over one million of its roughly 40 million citizens, the World Health Organization says.