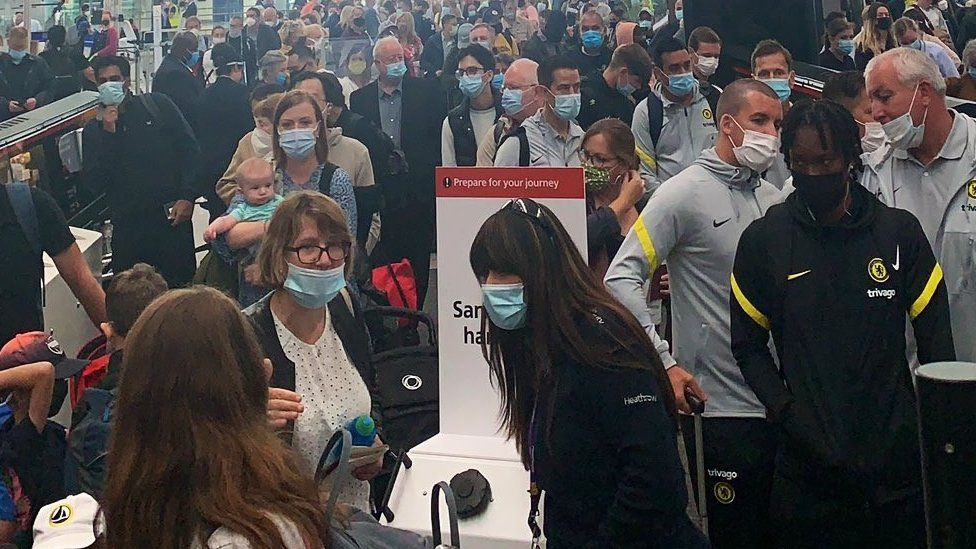 Heathrow’s Terminal 5 saw long queues at security on Monday morning because of the absence of more than 100 staff.

The airport said the issue had arisen because the security staff were instructed to self-isolate by the NHS Test and Trace app.

Some passengers experienced lengthy queues from 06:00. Many complained that there was limited social distancing.

It comes as the government faces calls to bring forward changes to Covid self-isolation rules.

The disruption affected only Terminal 5 and did not involve Border Force officers.

Some passengers complained on Twitter about “total chaos” and posted pictures of large crowds at the terminal.

One passenger, Kathryn Wylie, was travelling to Glasgow when she was caught up in the disruption. “It was manic,” she told the BBC.

“In Terminal 5, both security queues were backed up, with little being done to move people forward who had the closest upcoming flights.

“Luckily, one lady came through handing out water, but I’m not sure that went on very long.

“Once you finally got through to the security screening, there were maybe only two to four of the belts functioning, which made the whole process even more drawn out.”

Kathryn said that once she was on board the plane, its departure was delayed for another hour to allow people to get onto the flight who had not yet made it through security.

Keaton Stone, a BBC producer on The Sky at Night, also tweeted about the queues.

Never seen Heathrow so busy!!!! Tried to stay at home or at least deploy maximum social distancing all week ahead of flying to the US today – seems slightly redundant when this is what greets you at the airport!! Wish I had dressed in a Zorb Ball today!! pic.twitter.com/kYeNWNSfum

Most Covid restrictions are due to end on 19 July, however planned changes to self-isolation rules are not expected until 16 August at the earliest.

But many companies, especially in the hospitality and leisure sectors, say their reopening plans are in disarray due to the number of staff having to isolate because they have come into close contact with someone who has tested positive for Covid.

On Monday, business lobby group the CBI urged ministers to bring forward changes to the rules, saying it would help ensure reopening was a “confident” not “anxious” process.

A Heathrow spokesperson said: “Earlier today, we experienced some passenger congestion in Terminal 5 departures, due to colleagues being instructed to self-isolate by NHS Test and Trace.

“We have activated additional team members to assist passengers with their journeys and the operation has now returned to normal. We apologise to our passengers for any inconvenience caused.”

The Department for Health and Social Care has been approached for comment on the NHS test and Trace app.

Are you affected by the disruption? Get in touch by emailing haveyoursay@bbc.co.uk.