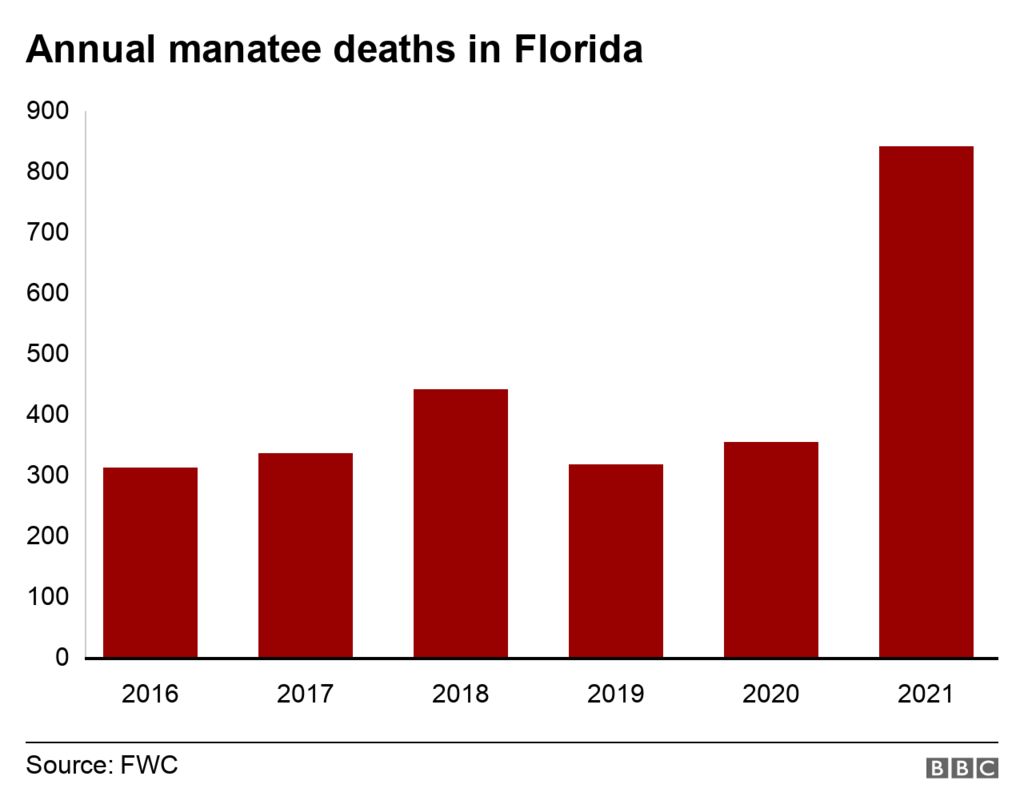 A record number of manatees have died this year in the US state of Florida, primarily from starvation, wildlife authorities say.

At least 841 of the marine mammals died in waters near the eastern state between 1 January and 2 July.

That breaks the previous record set in 2013, when 830 manatees died after exposure to harmful algae.

This year biologists say seagrass beds manatees rely on for food are dying out because of rising water pollution.

They say the main issue is the increasing waste contamination of Florida’s waterways, which triggers the accumulation of algae and the loss of seagrass.

Florida’s Fish and Wildlife Research Institute said most of the deaths had happened during the colder months, when manatees migrated to the Indian River Lagoon, where most seagrass had died.

As temperatures warmed and the animals dispersed along the Atlantic coast, boat strikes became a leading cause of death last month, official data show.

At least 63 manatees, also known as sea cows, have been struck and killed by boats so far this year.

Boat strikes “continue to be recognised as a concern for the population”, the research institute said.

The federal government changed the status of the manatee from endangered to threatened in 2017, but conservationists say greater protection is again needed.

The manatee is a large, slow-moving mammal which has become an unofficial mascot for Florida. About 6,300 manatees currently live in Florida waters, according to the government.

In recent months, marine biologists and lawmakers in Florida have been paying close attention to the deaths of manatees.

In March, wildlife officials declared an Unusual Mortality Event, which allows the federal government to investigate the cause of the deaths in partnership with the state.

Last month a coalition of environmental groups and local businesses urged Republican Governor Ron DeSantis to declare a state of emergency to address the manatee crisis.

But state environment officials said such an order was unnecessary because they already had the necessary resources.