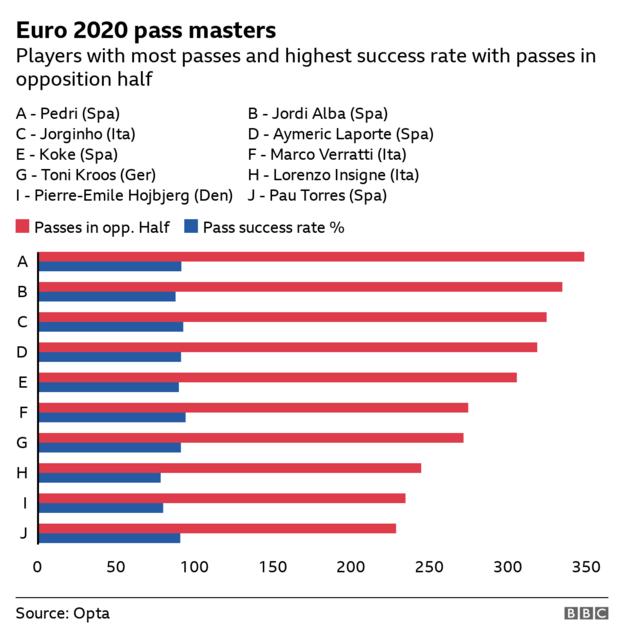 There were 142 goals, scored at a rate of 2.8 per game – the highest rate of any Euros tournament featuring more than four sides – 27 clean sheets, six red cards and much, much more.

As the dust begins to settle, BBC Sport looks at some of standout stats from this summer’s European Championship.

Phillips has come a long way

Had Euro 2020 taken place in its titular year, it is unlikely that Kalvin Phillips would have been in the England squad, let alone a starter in all seven matches at the tournament.

But with three years of tutelage under Marcelo Bielsa and a crucial first year in the Premier League completed at Leeds, the 25-year-old has now established himself in Gareth Southgate’s side.

In a tweaked role from the one he fulfils at his club, Phillips brought the supreme fitness and pressing intelligence for which Bielsa’s side is renowned, acting in part as a roaming disruptor for his country.

According to fbref.com, he was responsible for 229 pressing actions (applying pressure to an opposing player receiving, carrying or releasing the ball). That is 78 more than the next highest – Austria’s Konrad Laimer – and nearly double the next highest England player – Mason Mount with 118.

He was successful with 47 of those pressures – second only to Laimer on 48.

Phillips also covered the second most distance in the tournament, with his 83km only beaten by Italy’s Jorginho (86.6km). He managed an impressive 15km in both the semi-final and the final.

More impressive, and indicative of the unity of this England side, was the meters he covered straight after the game, to run to comfort Bukayo Saka following his penalty miss.

If we’re talking distance per game, both Jorginho and Phillips are behind Spain midfielder Pedri, who was named ‘young player of the tournament’ for his role in his country’s run to the semi-finals.

The 18-year-old is far more than just a runner, though.

In a Spain side that attempted the most passes in the tournament (5,051) and had the best completion rate (89.6%), Pedri was the chief conduit.

The Barcelona player attempted the most passes in an opponent’s half in the tournament with 348 and had the third highest completion rate from these passes (91.1%).

Of the 429 passes he completed (sixth overall in the tournament), 65 came from the 66 he attempted in the semi-final against Italy. The only one he failed to complete came in extra time.

Pedri also became the first European player in major tournament history (World Cup/Euros) to start as many as six such matches at the age of 18 or below.

The only blot in his copy book came via the helping hand (well, foot) of his own goalkeeper Unai Simon, who allowed his 49.36m backpass to find the Spain net against Croatia in the last 16.

It was the second longest range goal at a Euros since 1980, behind another strike that came this summer – Patrik Schick’s stunning effort against Scotland.

Speaking of own goals…

Pedri’s own goal was one of 11 at Euro 2020 – more than all of the previous European Championships combined (9).

Merih Demiral got the ball rolling right from the off, with his own goal for Turkey against Italy being the first time that the opening goal at a European Championship had come from a player putting the ball in his own net.

Against Slovakia, Poland’s Wojciech Szczesny became the first goalkeeper to score an own goal at a European Championship finals. Slovakia’s Martin Dubravka became the second when he punched into his own net in the 5-0 loss to Spain.

Continuing on the theme of the source of goals, more came from penalties in this summer’s tournament (9) than any other previous Euros.

Portugal 2-2 France was the first game in the history of the European Championship to see three penalties scored (excluding shootouts).

Portugal’s Cristiano Ronaldo was responsible for three of the nine penalties scored at Euro 2020 en route to claiming the golden boot (his one assist seeing him edge out Schick, who also scored five).

It was a record-breaking Euros for Ronaldo, whose double against Hungary saw him become the first player in European Championship history to score 10+ goals in the competition (11), overtaking Michel Platini’s record of nine (all scored in the 1984 edition).

The match against Hungary was Ronaldo’s 39th appearance at a major tournament (World Cup & Euros) for Portugal, an all-time record for a European player, overtaking Bastian Schweinsteiger’s 38 appearances for Germany.

With his two goals against France taking him to 21, the 36-year-old also became the first European player in World Cup and European Championship history to score a combined 20+ goals across the two competitions.

If Ronaldo is keen to carry on for another four years, and you wouldn’t put it past him, there is one record set at Euro 2020 he will have in his sights.

Goran Pandev’s equaliser for North Macedonia against Austria made him the second oldest goalscorer in a European Championship match at 37 years and 321 days, with only Austrian Ivica Vastic (38y 257d) managing to net at an older age in the competition.

Best of the rest…