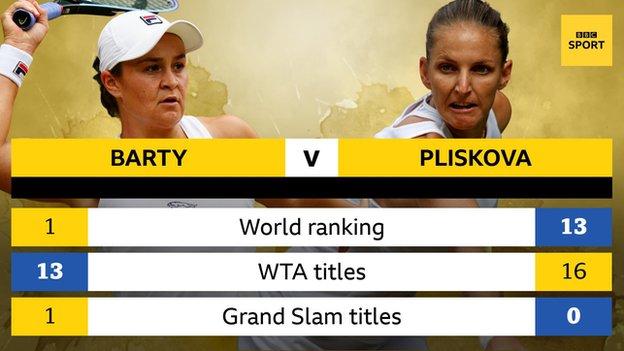 Australia’s Ashleigh Barty says she “couldn’t be more rapt” to play for her first Wimbledon title on the 50th anniversary of her idol Evonne Goolagong Cawley’s maiden win.

“To give myself a chance to create some history that’s almost like a tribute to her is really exciting,” said Barty.

World number one Barty has been wearing a scallop-hemmed dress at the championships as a tribute to the one Goolagong wore when she won the title in 1971.

The pair spoke before the tournament, although Barty says she has not been in contact with Goolagong during the fortnight.

“I’ve just been kind of floating my way through and just kind of enjoying the opportunities I’ve had here this week,” said Barty, who is bidding for her second Grand Slam title after winning the 2019 French Open.

Barty, 25, has only dropped one set on her way to the final and produced her best display yet in a straight-set win over Germany’s 2018 champion Angelique Kerber in the semi-finals.

She is the first Australian to reach the women’s final since Goolagong lifted her second title at the All England Club in 1980.

The run has come after Barty feared she might not even be fit to play in SW19. She was managing a hip injury at the French Open which led to her retiring from her second-round match at Roland Garros.

“To be honest, it was going to be touch-and-go,” said Barty, who won the junior Wimbledon title in 2011.

“If you told me a month ago we’d be sitting in this position, I really wouldn’t have thought that we would even get close. I think it’s pretty special what we’ve been able to do the last month.”

Former world number one Pliskova is also competing in her second major final but, unlike Barty, she was beaten on the first occasion.

Five years after losing to Kerber at the US Open, she is still trying to shake off the unwanted tag as one of the best players yet to win a major.

Coming into Wimbledon, Pliskova had only won one match in four tournaments since losing 6-0 6-0 to Poland’s Iga Swiatek in the clay-court Italian Open final.

Her pedigree at the All England Club – having gone no further than the fourth round in 2018 and 2019 – did not offer too much optimism, either.

On how it feels to have reached the final, Pliskova said: “I think I still half can’t believe it.

Pliskova said her confidence took a hit after early exits at the French Open and then grass-court events in Berlin and Eastbourne.

“Of course you need to win couple matches to feel [more confident] and to play the best tennis,” she said.

“It’s not that I would be playing horrible. Sometimes you’re just missing a little bit and you’re not doing anything wrong.

“I think sometimes just to hang in there is super important, which I did. I didn’t really change anything.”

With both women experiencing their maiden Wimbledon finals, nine-time champion Martina Navratilova says the key will be who “handles the occasion the better”.

“But you never know until you get there how you will handle it,” she added.

“My advice to both players would be ‘just play the ball’. You’re playing the opponent, you’re not playing the Wimbledon final.

“Of course if you get to match point and your heart starts pounding then you feel like you’re going to faint, but you somehow manage to keep it together by playing by memory.

“Everyone gets nervous and everyone chokes, it’s how little you can choke, how well you can handle the nerves.

“The key is to admitting ‘OK, this is what I’m feeling now, what do I have to do to win this next point’ and bring it back to the tennis.”

Barty, who stands 5ft 5in, has a contrasting style to her 6ft 1in opponent Pliskova.

The Australian has broken serve 27 times and made 86% of her returns this fortnight, while the Czech relies on her big-serving game and leads the tournament ace count with 54.

“No-one has been able to handle the Pliskova pace and the way she played against Sabalenka was really impressive,” said Navratilova.

“It’s going to be hard for Barty. On paper the numbers are in Pliskova’s favour on most of the important stats, but it comes back to who can handle the pressure the better.

“Barty is a disruptor, she changes the pace and takes you out of your rhythm. So the key for Pliskova is keeping that rhythm.

“If she can then I think she will win because she has so much firepower. Her serve is bulletproof. She’s moving better and playing better tennis overall.

“It’s a toss-up. I’m giving the slight edge to Pliskova, only because of the way she has been playing the last two weeks. But overall Barty is the better player.”