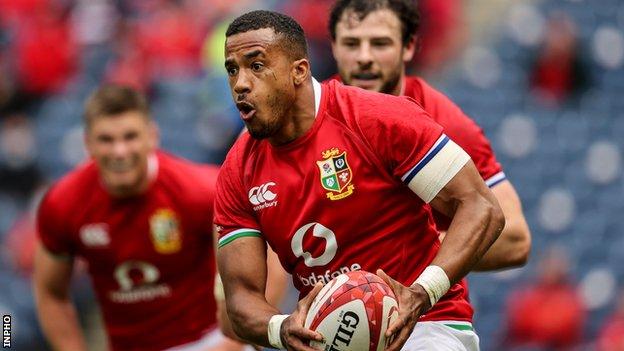 Anthony Watson will make his first start of the British and Irish Lions tour against the Sharks on Saturday.

The Lions’ original fixture against the Bulls was called off because of an outbreak of Covid in the hosts’ camp.

There are 13 changes from the starting line-up that ran out conclusive 54-7 winners in midweek, with outside centre Elliot Daly and Van der Merwe the only players to keep their places.

Ireland scrum-half Conor Murray and Scotland fly-half Finn Russell are the only two backs replacements on the bench.

Head coach Warren Gatland is picking from almost a full complement of players after the Lions player who returned a ‘weak’ positive on Wednesday subsequently tested negative on the following two days.

He and his close contacts have been allowed back into the Lions bubble. One player remains in isolation as a close contact of a member of the management team who has tested positive.

Altitude factor to be taken out of Test series?

After the Bulls withdrew from the fixture earlier in the week, a rematch against the Sharks, who had completed the required testing and period of isolation, was hastily arranged to allow the Lions to continue their preparations to meet world champions South Africa.

Gatland said he believed all three Tests against the Springboks would be staged in Cape Town, potentially helping the tourists.

The sides’ second and third meetings were planned to take place at altitude in Johannesburg, the epicentre of South Africa’s Covid outbreak.

“I think they are definitely going to be in Cape Town. That hasn’t been confirmed but is my understanding,” Gatland said.

“The way we have been training I think three Tests at sea level is a real positive for us.”

Gatland added that he was “not 100% sure” who his team would be playing next Wednesday, with the South Africa A side due to be drawn from a wider Springbok squad that reported 12 Covid cases earlier this week.

“It’ll either be the Springboks ‘A’ or the Stormers. They might switch those games around. That’s hasn’t been confirmed. Hopefully in the next 24 hours we’ll know which way those games go,” Gatland added.

He said the selection of England hooker George as a captain for the match was an easy decision after the 2017 tour on which he started all three Tests against New Zealand.

“I was incredibly impressed with him on the tour four years ago, not just his playing ability, but as a player and an individual,” he said.

“He has developed in terms of experience and leadership. It is a good fit and reward for someone who has been a great servant of the game.”

The Sharks have also made a raft of changes in light of the three-day turnaround, although captain Phepsi Buthelezi keeps his place at number eight and Werner Kok, who impressed on the wing, moves into midfield.

The Springboks have been forced to cancel their own warm-up match against Georgia after their own Covid outbreak.

The three-Test series begins on 24 July.