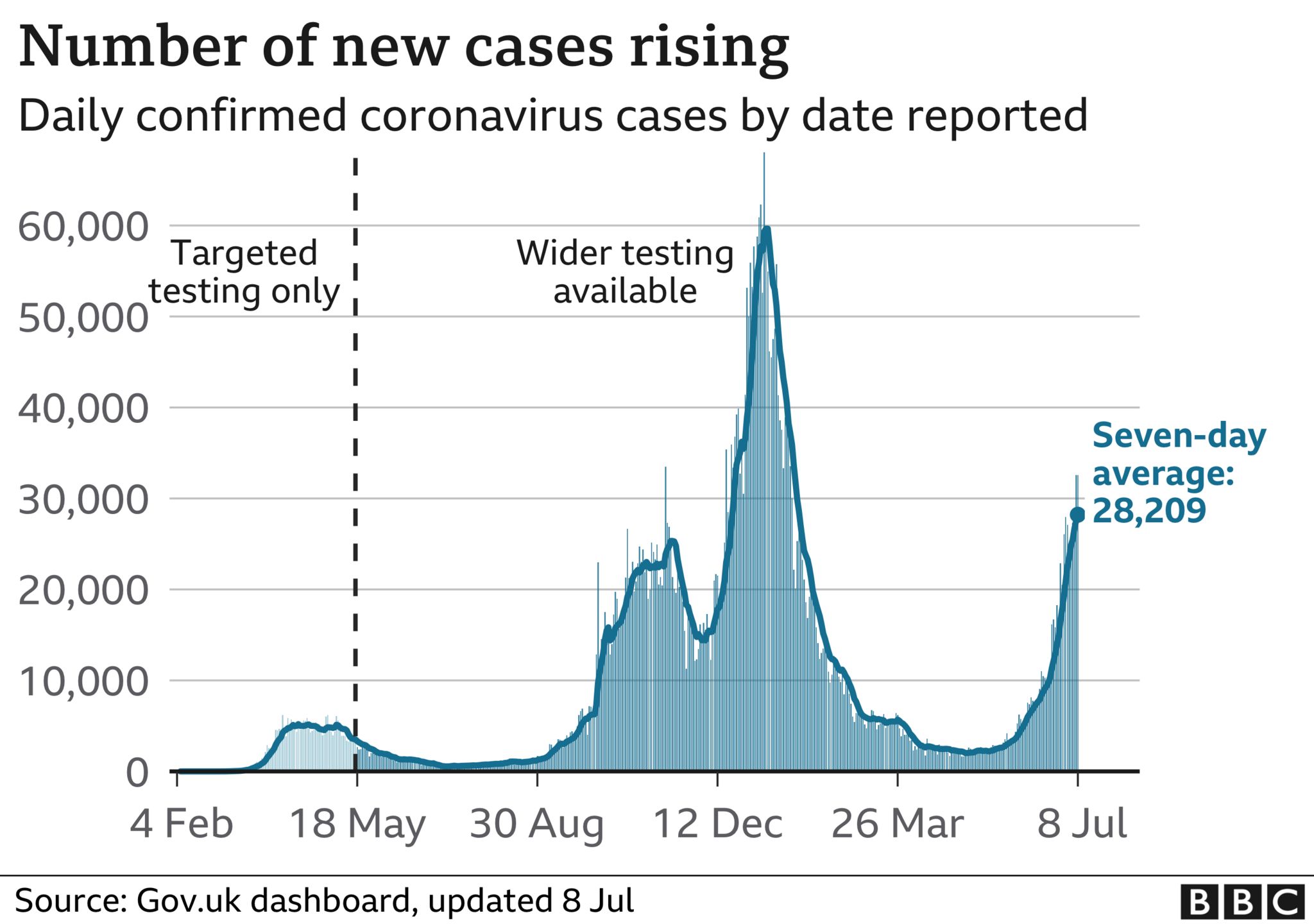 Fully vaccinated UK residents arriving in England from amber travel list destinations will no longer have to quarantine from 19 July.

However, they will still need to pay for Covid tests before and after their return, the transport secretary said.

Travel industry leaders said the change was a “positive step” but called for the amber list to be expanded.

Currently, anyone returning from countries on the amber or red list must isolate for 10 days, regardless of vaccine status.

Mr Shapps said a full vaccination means “14 days have passed since your final dose of the vaccine” – and only vaccines given by the NHS will count.

But he said officials were “working to extend our approach to vaccinated passengers from important markets and holiday destinations, later this summer, such as the United States and the EU”.

Under the change, fully-jabbed people travelling from amber list countries will still be required to take a test three days before they return and on the second day after they are back – but they will now be exempted from a day eight test.

Mr Shapps told MPs: “In essence, this means that for fully vaccinated travellers the requirements for green and amber list countries are the same.”

He also said that, from 19 July – the day when most Covid rules in England are due to end – the guidance that people should not travel to amber list countries will be removed.

But he cautioned that “an amber list country could still turn red”, meaning hotel quarantine would become a requirement.

All of England’s 19 July rule changes are due to be confirmed on 12 July after a review of the latest data.

But most places – including holiday hotspots such as mainland Spain, Greece and the US – are on the amber list.

The next review of the countries on the green, red and amber lists will take place on 15 July.

Speaking later, the transport secretary told the BBC: “We had the choice of simply saying people would never be able to travel until every single last person had been vaccinated – or at least starting to open things up.”

Mr Shapps said testing was “important to keep people safe” and prevent variants arriving in the UK, but denied the requirements would continue to price-out many families.

The government website lists nearly 400 providers carrying out the tests fully vaccinated travellers would need to take on their return. Prices begin at £2.49, with the majority in the £50-£100 price range.

The Foreign Office, which issues travel advice that is independent from the government’s traffic light system and could affect travel insurance, is stressing that not all amber countries will be approved for international travel on 19 July.

However, it has updated its approved list and it now has several amber list countries including France, Greece, Morocco, Switzerland, the US, Jamaica and mainland Spain.

For the first time in a while, travel bosses are relatively pleased.

Today’s announcement is a big change, opening up international travel far more significantly that has been possible this year. However, there are limitations.

This policy only applies to those jabbed in the UK, meaning those jabbed abroad will still have to quarantine if coming from an amber list country.

That will affect some family and friends hoping to reunite and impact on businesses that rely on international visitors who won’t see those customers return in the same numbers as UK travellers will leave.

Tests are still required from green and amber list countries. The cost will dissuade some from travelling.

Crucially, this rule is just about what happens when people travel to the UK. Whether other countries will let UK travellers in is a different matter altogether.

Tim Alderslade, chief executive of Airlines UK, the industry body representing UK-registered carriers, said the rule change was a “positive move towards the genuine reopening the sector has been looking for”.

John Holland-Kaye, chief executive of Heathrow, welcomed the change but said: “The UK should open up travel to fully vaccinated people from more countries – particularly our key partners in the US – by the end of July.”

However, MP Caroline Lucas – vice-chair of the All-Party Parliamentary Group on Coronavirus, said the government was “in danger of repeating the same mistakes that allowed the Delta variant to take root in the UK”.

Katherine Wood, a post-doctoral researcher at the University of Oxford, will not get a second jab until the end of August and told the BBC the government changes were frustrating for young people who had already sacrificed a “huge amount” during the pandemic.

The 26-year-old said: “They should have waited until the vast majority of people, particularly young people, had been double-vaccinated before changing any rules because I really feel quite disenfranchised by what’s happened.”

What are the current requirements for entering other countries?

The traffic light system sets the rules travellers must follow on their return. But holidaymakers also need to check their destination’s entry rules.

Over-12s travelling to Spain need a negative test or proof of vaccination.

Earlier, Chancellor Rishi Sunak told the BBC that in addition to relaxing the rules around isolation for travellers, the government was considering a “more proportionate and balanced approach” to isolation for Covid contacts.

It comes amid fears that surging cases will lead to millions of people being asked to self-isolate during the summer, even if they have been fully vaccinated.

The requirement for double-jabbed people to isolate after contact with a positive case is due to end on 16 August, four weeks after the majority of England’s Covid rules are set to end, to allow more people to be vaccinated.

Mr Sunak acknowledged there was “frustration” at how the NHS contact tracing app could continue to order the double jabbed to isolate.

Dr Jenny Harries, head of the UK Health Security Agency, urged people to continue using the app – saying it had helped to detect about 500,000 cases to date – but told the Commons Public Accounts Committee work was being done to “tune” it to operate within the vaccinated population so it was there “for a purpose, not for annoyance”.

Nearly 65% of the adult population in the UK have received two jabs, and 86% have had a first dose.

A total of 32,551 new UK coronavirus cases were announced on Thursday – up very slightly on Wednesday and taking the total number of positive tests in the pandemic above five million. There were also 35 more deaths.

Have you been affected by the issues raised in this story? Share your experiences and views by emailing haveyoursay@bbc.co.uk.