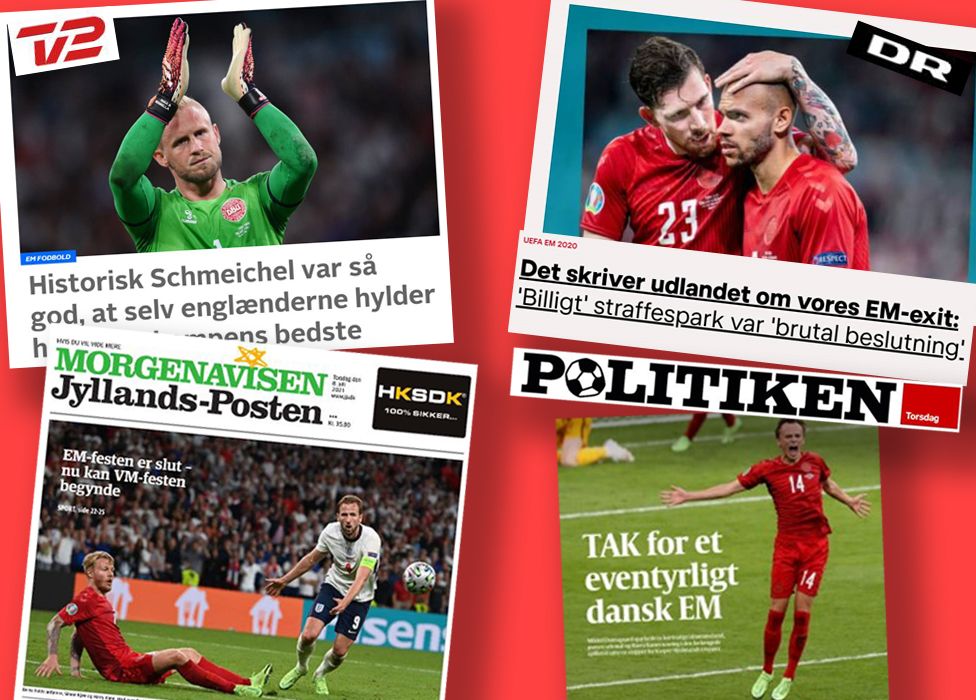 Commentators and fans in Denmark have been reacting to the team’s defeat by England in the semi-finals of the Euros, with sadness tinged with hope for the future.

“The Euros party’s over – now the World Cup party may begin,” was the headline in daily Jyllands Posten.

Many commentators chose to focus on pride in the national football team rather than complaining about the game, which was won by a controversial penalty in extra time.

“Let the national team be embittered over the semi-final defeat. The rest of us just have to be grateful for the experiences – and for the prospect of a golden future,” a commentary in the same newspaper said.

“We must not feel sorry for ourselves, we must be proud.”

Public service broadcaster DR noted that playing extra time required “men and heart”. “The Danes fought until they could no longer stand,” it said.

‘It’s been so magical’

Others alluded to the hardships the team came through, including the fallout from the coronavirus pandemic and the collapse of key player Christian Eriksen during the first match against Finland.

“Goodbye, Euros – but from here just a THANK YOU!…,” he wrote. “To the national team for being the backdrop for a formidable summer, where the Danes broke out of the corona isolation and partied with [coach Kasper] Hjulmand’s boys. THANK YOU FOR BEING the cohesive force of the country for a month, for sharing an incomparable unity, joy – and a nice amount of parties all over the country. Thanks for a magical final round…

“THE PARTY IS OVER, but what a party. One with a free bar, dancing on the tables, life and happy days – and the kind where you are reluctant to go home.”

Sports journalist Carsten Werge tweeted: “Why is Denmark the real European Championship winner? Because Christian Eriksen survived. That means far more than a final place and a trophy.”

“My generation did not get a European Championship title, but we did have a summer we will never forget…,” tweeted table football champion Amalie Bremer. “Since June 12, I have been tearful as never before. Every Danish flag and every red jersey has made all nerve endings tremble. It’s been so magical. Thank you.”

Many ordinary fans praised the way Hjulmand and his team had found a way to reconnect with them.

Anette Larner said she was looking forward to the World Cup. “I’m full of admiration for these boys, and Hjulmand and co!! Heroes, and they have shown what Denmark is made of. Proud and disappointed, but mostly proud! #ForDanmark,” she tweeted.

“I am definitely frustrated with the way Denmark lost yesterday,” tweeted Esben Suurballe. “But as someone who since the turn of the millennium has had an extremely strained relationship with national team football, I can’t thank Hjulmand and the boys here enough for recreating that affiliation again. That is the biggest victory.”

Michael Rasmussen wrote: “Now the whole of Denmark has got a taste of what it is like to be a football fan, and how great it is to have a match every week to look forward to – so find yourself a team, and fall in love with it.”

But what of England? One high-profile Danish fan, at least, was unashamed about switching his allegiance to the Three Lions for the final.

“Congratulations England. Looking forward to the final. All the best to your great team,” Ambassador in the UK Lars Thuesen tweeted.

In another post he compared Denmark’s performance to their success in winning Euro ’92, and said he would be supporting England in Sunday’s final.

Our fairytale is over for now, but it was 🇩🇰second best result ever. Great team and the best teammates in the world. We will never forget this tournament. PM Johnson is looking forward to the final and so am I. England is my home away from home and I’ll cheer for them on Sunday. pic.twitter.com/yT854gsYR9

Solidarity from England’s other Euro opponents

With Danes focused on their team’s successes, it seems to have fallen to England’s previous opponents in the tournament to voice criticism of the manner of Wednesday’s victory.

The media in Germany, who England defeated in the last 16, showed solidarity with their Danish neighbours by casting doubt on the penalty decision.

Popular tabloid Bild said: “England are in the final due to Kane and luck!”

“Denmark’s fairytale ends in the semi-finals against England,” Die Welt said. “A questionable penalty whistle brings the hosts victory and a place in the final.”

“They suffered after the Christian Eriksen drama. They surprised as outsiders. They were close to the European Championship finals. But the Danish dream ended shortly before – due to a controversial penalty,” it said.

Spiegel carried an article titled “The rough English way” and spoke of “boos against the Danish anthem, a controversial penalty”. “The English made no new friends in the semi-finals. In terms of sport, however, the Three Lions have earned their final.”

Blogger Yury Bohdanov said the controversial penalty made the England game “anti-football”. “Football and anti-football will meet in the final. Forza, Italia,” he said on Facebook.

The match officials were benevolent towards England over the penalty, said Ukraine’s former ambassador to the US Valery Chalyy.

“The English deserved their victory, but why help them in such a way?” he wondered on Facebook.

“This is the case when a referee ruined football. Denmark will remain the winner for me,” activist Yaroslav Lebedev said on Facebook.

BBC Monitoring contributed to this article