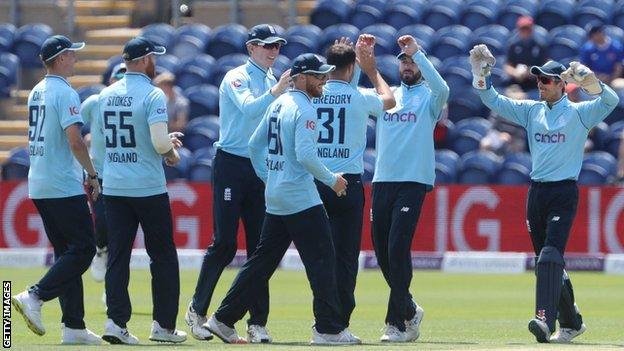 A day before the first one-day international against Pakistan began England’s new squad were not allowed to be in the same room as each other.

Rushed together after the original squad was forced into Covid-19 isolation, the new party was awaiting its own test results.

When an XI was selected it featured five debutants – the least experienced England side to play an ODI for 36 years.

So fresh was the line-up that interim captain Ben Stokes forgot the names of all five – Phil Salt, Zak Crawley, Lewis Gregory, John Simpson and Brydon Carse – when asked his starting side.

But it did not matter. Pakistan were thumped by nine wickets in Cardiff by an England side who had 124 ODI caps between them – with Stokes making up 98.

Lancashire fast bowler Saqib Mahmood was the star. He was still asleep on Tuesday morning when he received a message from England coach Chris Silverwood saying: “Text me when you get this.”

“It was completely out of the blue,” said the 24-year-old.

“I started the morning in Manchester and ended the day in Cardiff.”

Mahmood took 4-42 in Pakistan’s 141 all out, including two wickets in the first three balls. The second was Pakistan captain Babar Azam – the number one ranked ODI batsman in the world.

Afterwards Mahmood joked about being a senior player in the team, having played four previous ODIs and six Twenty20s.

“The fact it all happened so quickly and you had less time to train was almost better instead of obsessing about your skills,” Mahmood added.

“I took confidence that my game was in a good place and went from there.”

You could set your watch to England’s world champions, dressed in pale blue, in the field in recent years

The well-built frame of Jason Roy dives around at backward point, Joe Root giggles at slip and Jonny Bairstow dashes around the boundary edge to prevent every single run.

This was different. Players you instinctively expect to be in positions were replaced.

In captain Eoin Morgan’s absence, Stokes, himself hurried back from injury, led the team.

Rather than the usual all-action Stokes, here the all-rounder positioned himself at mid-on or mid-off, talking to his inexperienced bowling attack – be it Carse or Gregory, one-cap Craig Overton or leg-spinner Matt Parkinson on his third appearance.

The bowlers proved to be almost perfect understudies to the senior men.

Gregory bowled an away-swinger Chris Woakes would have been proud of to dismiss Mohammad Rizwan.

Overton came back after an indifferent start to claim two wickets with bouncers to the lower-order, a tactic seen in England’s recent demolition of Sri Lanka, while Parkinson struck at key times, just like Adil Rashid.

Even when Dawid Malan and Crawley raced to the victory target with 28.1 overs to spare you could have been mistaken for thinking it was Root and Roy batting.

Malan played some gorgeous, well-timed strokes while Crawley, one of the five debutants in this format, cracked the ball to the rope to excite the crowd who had not been given a contest to witness.

Morgan may have been isolating far away but his presence was still felt.

“It is a sign of the culture that has bred in England white-ball cricket of taking the positive options and not going out to be selfish,” England bowler Steven Finn told BBC Sport.

“We saw Stokes captaining and having three slips in, which we would have never seen before.

“That attitude is seeping through not only the international team but domestic cricket as well.”

For Pakistan it was a sorry performance.

They had spoken of the added work for their analysts in the run-up to the game, as they tried to research England’s last-minute call-ups.

In the end it was Mahmood, an opponent and team-mate to many of them in the recent Pakistan Super League – he played for Peshawar Zalmi in the latest edition of the Twenty20 competition – who caused the most damage.

“We had seen most of them but there were a couple of new faces,” Babar said. “We have seen them [now]. We will try to get set better and do better in the next game.”

Pakistan may know what is coming on Saturday at Lord’s, but they will also know England’s ‘understudies’ can be as ruthless as the world champion side.