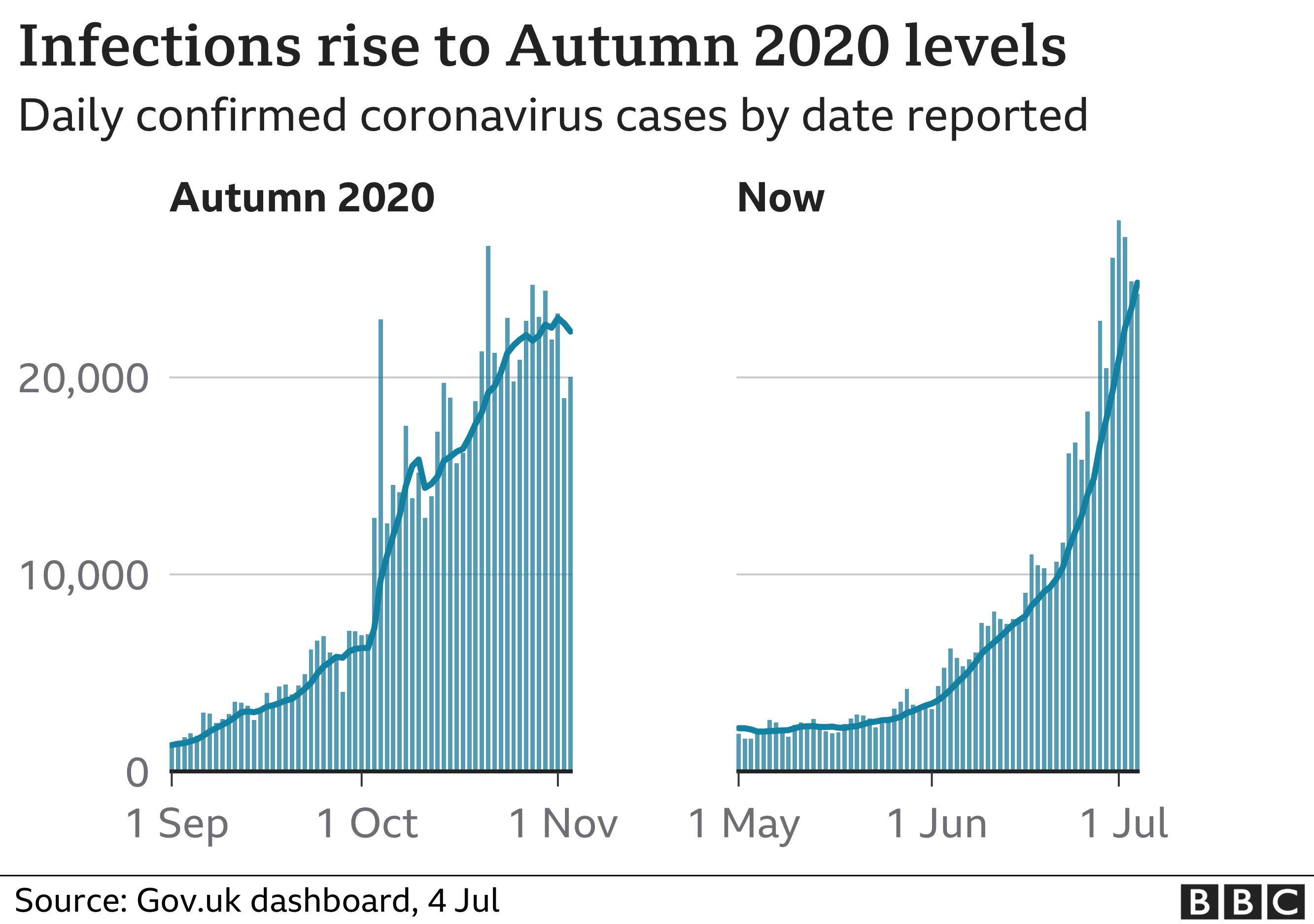 Boris Johnson is expected to confirm he is confident the majority of the remaining Covid restrictions in England can be lifted from 19 July.

Making face masks voluntary and ending 1m-plus social distancing and QR code sign-ins at restaurants will be among his press conference announcements.

The PM said people must “learn to live” with Covid and “exercise judgement”.

Infections are expected to rise when rules are eased but ministers believe deaths will be limited by vaccinations.

A further 27,334 cases were reported across the UK on Monday, alongside another nine deaths within 28 days of a positive test.

The fourth and final stage of the government’s roadmap out of lockdown in England was delayed last month to no earlier than 19 July.

Among the current measures are the “rule of six” for gatherings, table service in pubs and restaurants, capacity limits in theatres and cinemas, the closure of nightclubs, and working from home guidance.

However, while many of the remaining rules and guidance looks set to be swept away, the prime minister is not expected to address self isolation, travel restrictions or the rules in schools.

Scotland, Wales and Northern Ireland are in charge of their own coronavirus rules, and the Scottish government has suggested it may retain some basic measures, including wearing masks, at its next review in August.

The chairman of the British Medical Association, Dr Chaand Nagpaul, said it “makes no sense” to stop wearing face masks in enclosed public settings amid a rising number of cases of the Delta variant.

He told BBC Radio 4’s Today programme “face masks are proven to reduce spread of this infection” and “we can’t understand why we would knowingly want people to become infected”.

Unions representing public transport and shop workers said their staff would face even more risk of infection if face mask rules are dropped.

Meanwhile, Ryanair said face masks would remain mandatory on its flight “in order to protect the health of our passengers and crew”.

In comments released by Downing Street before the prime minister gives his update at a 17:00 BST news conference, Mr Johnson said he “must stress that the pandemic is not over and that cases will continue to rise over the coming weeks”.

But praising the successful vaccine rollout, he said he would “set out how we can restore people’s freedoms”, adding: “As we begin to learn to live with this virus, we must all continue to carefully manage the risks from Covid and exercise judgement when going about our lives.”

Downing Street said step four of the easing would go ahead in two weeks’ time only if the government’s “four tests” for easing curbs had been met.

The verdict on those tests – on the jab rollout, vaccine effectiveness, hospital admissions, and new virus variants – would only be confirmed on 12 July following a review of the latest data.

The findings of reviews on the use of Covid certification – or vaccine passports – and on social-distancing measures are also due to be announced by Mr Johnson.

It is understood the restriction banning pub-goers from ordering a drink directly at the bar will be dropped.

But Downing Street stressed rules against travel to high-risk countries, the requirement to isolate if people test positive, as well as surge and community Covid testing programmes would continue after 19 July.

Behavioural psychologist Prof Stephen Reicher, one of the scientists advising the government, expressed concern about the face mask plans.

He told Today: “We need very clear messaging and in certain spaces – crowded, badly ventilated spaces – masks are crucial mitigation,” adding ministers needed to provide “support and proportionate mitigations to keep us safe. Along with the vaccine, that’s the way out”.

Paul Nowak, deputy general secretary of the Trades Union Congress, said it was “vital” people would be returning to Covid-secure work sites.

“I just don’t think it is acceptable for the government to simply outsource its responsibilities to individuals and to individual employers,” he said.

Meanwhile, shadow health secretary Jonathan Ashworth urged the government to confirm “what level of mortality and cases of long Covid” it considers acceptable.

“Letting cases rise with no action means further pressure on the NHS, more sickness, disruption to education – and risks a new variant emerging with a selection advantage,” he warned.

Stephen Powis, the National Medical Director for NHS England, said infections were currently rising but hospital rates were not increasing at the same rate as previous peaks and “things are looking very good”.

He told BBC Breakfast the NHS was “well used to coping with pressures, we do it every year and every winter. So we are prepared.”

From the start of the pandemic, the single most important measure for controlling Covid was getting people to isolate when they had symptoms.

It’s why so many have urged the government to do more to support people financially when they do so.

Everything else from mask-wearing and social distancing to contract tracing was about marginal gains on top.

As we learnt more about the ability of the virus to spread before symptoms developed or among those who were asymptomatic those marginal gains became more important.

But alongside isolating when ill, the new tool in the fight against Covid is, of course, vaccination.

Not only do the vaccines protect you, they protect others by curbing spread by cutting your chances of being infected in the first place and your risk of passing on the virus if you do become infected.

With high vaccination uptake, all those other measures are much less important than they once were.

That’s why ministers feel they can ditch many of them – and in doing so become arguably the first nation to relax restrictions on this scale with infections rising and attempt to learn to live with Covid.

The review of social-distancing measures has been of particular interest to the hospitality industry, which says many venues are unable to operate profitably under restrictions on capacity and table service rules.

The findings of a review into Covid certification are also expected. The use of certificates to prove a person’s Covid vaccination or test status has been welcomed by some travel industry bosses and leading sports bodies – but the concept has raised concerns over discrimination and privacy.

Separately, the PM will give further details on the future of care home visits. At the moment, care home residents in England can choose up to five people who can visit regularly, but no more than two people should visit at one time or in one day.

Care minister Helen Whately says visits are unlikely to “completely go back to normal” as there was a need for some precautions for residents – and face coverings were expected to remain a requirement.

Around 64% of the UK adult population has now received a second vaccine dose, with just over 86% having now received at least a first dose.

No 10 has said the government is ensuring preparations are in place to offer third “booster” doses to everyone aged over 50 and the most vulnerable over the winter months.