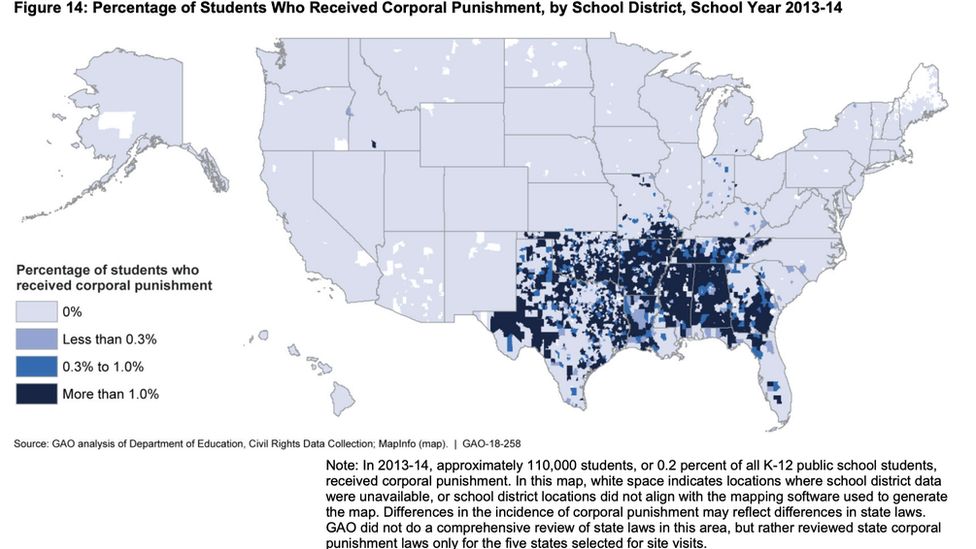 A video of a Florida school principal using a paddle to spank a 6-year-old student has sparked outrage online.

In the graphic video, shot by the child’s mother on her mobile phone last month, we see the student bent over a chair, crying, while she is paddled three times by principal Melissa Carter of Central Elementary School in Clewiston, Florida. Ms Carter is now under investigation by the Hendry County school board and the local sheriff’s office.

But while physical discipline has been outlawed in US military training centres, juvenile detention facilities and as punishment for a crime, slapping or spanking a child remains legal in 19 states across the country.

Here’s a look at the state of corporal punishment in US schools today.

Where is it allowed in the US?

Nineteen US states – mostly in the country’s south – currently allow corporal punishment in schools. Rules in each state vary regarding what type of paddle can be used, how hard administrators are permitted to strike the child and whether “bodily injury” to the student is permissible.

Alabama, Texas, Louisiana, Mississippi and Georgia are among the states where the practice is used, though individual school districts within these states may vote to bar the practice.

Such is this case for the Hendry County school board, which has outlawed physical punishment even though the state it’s in – Florida – allows it.

Some Southern lawmakers are working to ban the practice. Louisiana Congresswoman Stephanie Hilferty sponsored a bill this year that, if passed, will make corporal punishment illegal in the state. According to Ms Hilferty, 744 students were disciplined with that form of punishment in the last full school year before the Covid-19 pandemic.

Similar measures have failed in recent years, with some opponents saying the issue should be left to individual school districts.

Louisiana and Tennessee have made some changes in the past five years, amending their laws to ban school districts from using paddles or spankings to punish children with disabilities.

Still, it has been a decade since a state-wide ban has actually been passed. New Mexico in 2011 passed legislation prohibiting corporal punishment as a disciplinary tool in schools.

In 1977, the US Supreme Court found that the Eighth Amendment – which prohibits cruel and unusual punishment – did not apply to school students, meaning that teachers could use physical punishment without parental permission.

There is no federal ban on corporal punishment. Though the practice has steadily declined over time, more than 106,000 children were physically punished at US public schools during the 2013-2014 school year – the most recent year for which national data is available – according to the Education Department’s Office for Civil Rights.

And critics of corporal punishment are quick to note that such discipline is not evenly distributed. Experts have found that black students, boys and disabled students are disproportionately the subjects of sanctioned violence in school.

In the 2013-2014 school year, black students made up 15% of all school students but more than 22% of those who received corporal punishment, according to a study by the Government Accountability Office. Conversely, white students made up a little more than half of all students, but received less than 0.2% of the punishment.

Since 2000, the American Academy of Pediatrics has called for a ban in schools.

And in 2018, the organisation warned that parents should also avoid all physical and verbal abuse of children, calling it “minimally effective in the short-term and not effective in the long-term”.

“With new evidence, researchers link corporal punishment to an increased risk of negative behavioural, cognitive, psychosocial, and emotional outcomes for children,” the academy said in a statement.

What about in other countries?

Though the practice has steadily fallen out of favour in the US, 63 other countries allow corporal punishment in schools, according to the Global Partnership to End Violence Against Children.

Australia, India, Thailand, Indonesia and Malaysia all join the US in allowing corporal punishment in some or all schools.

In the UK, corporal punishment in state-funded schools has been outlawed since 1986. Privately funded schools came a little bit later: 1998 in England and Wales, 2000 in Scotland and 2003 in Northern Ireland.

The ban is widely credited to two Scottish mothers – Grace Campbell and Jane Cosans – who won a landmark case at the European Court of Human Rights to stop corporal punishment in Scottish schools.

A few years later, Canada followed suit. This country’s ban also followed a court case, with the Supreme Court of Canada ruling in 2004 that corporal punishment in schools was an unreasonable application of force on students.

But in Canada and the UK – with the exception of Scotland – corporal punishment remains legal in the home in certain circumstances.

Some 62 countries have banned the that form of punishment of children outright including in the home, according to Global Partnership to End Violence Against Children. Sweden, Finland, Austria, Denmark and France are among the countries with blanket bans.