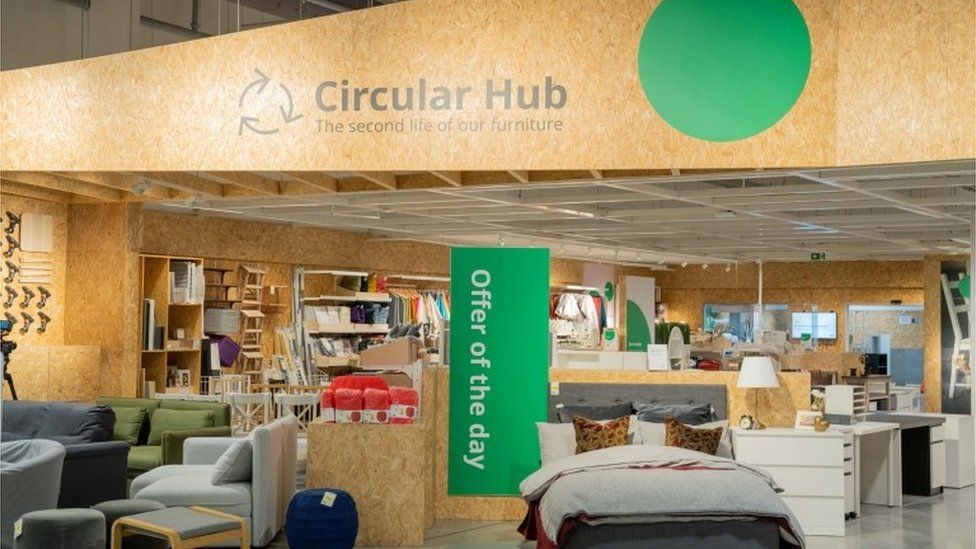 Ikea has launched its long-awaited furniture buy-back and re-sale scheme, in an attempt to reduce the amount of products going to landfill.

The move is part of the retail giant’s sustainability drive to become “climate positive” by 2030.

Customers will get vouchers to spend in-store if items they no longer need are returned in good condition.

Ikea admitted the scheme was a learning curve, but decided to launch it after successful trials in several cities.

“I’m not saying we have all the answers, but we learned enough from the pilots to tell us that this could be something of real value to us and our customers,” Hege Saebjornsen, an environmental and sustainability expert at Ikea, told the BBC.

The initiative, originally scheduled to launch in November but postponed because of the pandemic, is now available in Ikea stores across the UK. It is also being launched in the other 26 countries in which Ikea operates.

The items will be sold in separate areas of the stores, although Ikea has also announced a new partnership with Gumtree to sell second-hand products via the online marketplace.

The Swedish company has already announced it wants to become fully “circular” – eliminate waste through the continual use of materials – by 2030. Ingka Group, Ikea’s parent company, recently announced it was investing €4bn in renewable energy.

Customers wanting to sell back furniture go to Ikea.co.uk to fill out an online form, which generates a preliminary offer, and then take items to a store.

Ms Saebjornsen, a former sustainability manager at the retailer and now an Ikea adviser on the forthcoming COP26 climate summit, said that exactly what the consumer uptake will be is unknown.

But she said the trials, including in Sydney, Lisbon, Edinburgh and Glasgow, “were really successful. It taught us a lot about the appetite for this and how people behave”.

The second-hand market generally – from clothing to homeware – is growing rapidly as shopping habits change, and Ikea hopes to tap into this, she said.

One potential drawback was that furniture must be delivered fully-assembled, a possible impediment for people who have heavy and bulky items.

“We still found people are taking us up on it [the scheme],” she said.

Ikea is working on how to improve the disassembly of products.

“Some are better than others. Products can get damaged when taken apart, so we can only really accept assembled products. It maintains the security and quality of the item,” she said.

Although Ikea is offering vouchers, not cash, the scheme is not being introduced as a profit driver for the retailer, she said. Still, doesn’t it reinforce a buy-new, disposable culture?

“We’ve taken all of that into account,” Ms Saebjornsen said.

“It’s really important to highlight that the voucher has no use-by date. They can be used to buy another second hand item, or food.

“The real consideration here is that it’s about how we make sustainable and healthy living easy, accessible and affordable, and really mainstream.

“Ikea is such a large company with massive potential to reach millions of customers.

“We are not saying that we have all the answers. But small actions can make a difference.”

The buy-back service is available in full-sized Ikea stores nationwide, excluding order and collection points in Tottenham Court Road, Norwich and Aberdeen. The service will launch in Reading and Belfast on 17 May.