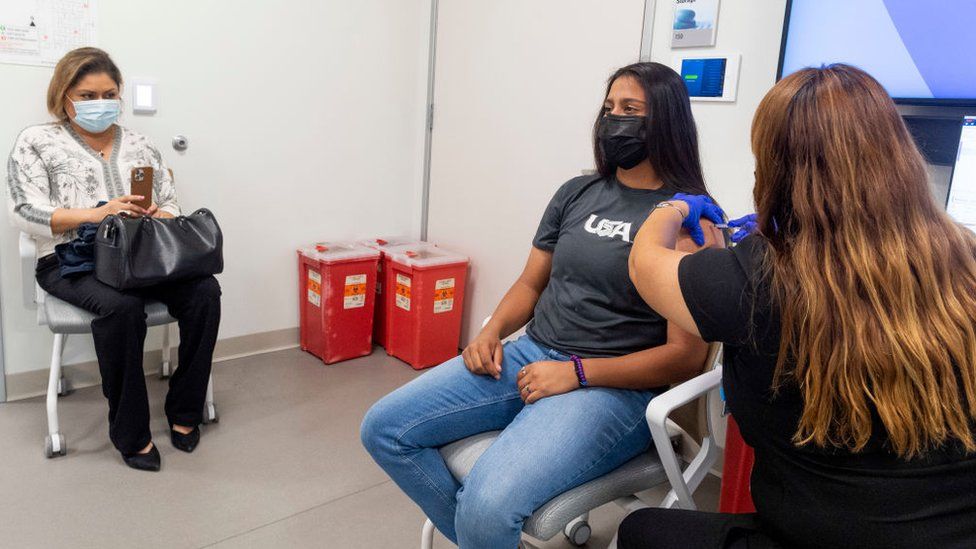 President Joe Biden has laid out plans to vaccinate 70% of US adults by 4 July and roll out the shots for 12- to 15-year-olds as soon as possible.

The target is well within reach given that 105 million have already had Covid-19 jabs and the US is vaccinating nearly a million adults per day.

But the vaccination rate is half of what it was just three weeks ago.

Mr Biden said his administration was working to win over “doubters” about the shots.

Israel – a world leader in vaccination rates – has nearly fully reopened its economy and seen its number of new coronavirus cases crash to almost zero, with just over 60% of the population having received at least one shot.

Mr Biden said at the White House on Monday: “In two months let’s celebrate independence as a nation and our independence from this virus. We can do this and we will do this.”

The Democratic president also announced a new website, vaccines.gov, that Americans can use to more easily find vaccination sites after widespread complaints that the sign-up process was too difficult for some.

There is also a phone number Americans can now text to submit their postal code and learn about vaccination sites in their area.

Mr Biden had previously set the goal for life to be “back to normal” by 4 July.

What’s the plan for children?

The US Food and Drug Administration is weighing whether to approve the Pfizer vaccine for children as young as 12.

Pfizer’s vaccine is currently approved in the US for people as young as 16.

Mr Biden said he would not interfere with the FDA process but “if that announcement comes, we are ready to move immediately”.

The president told reporters: “We’re also going to slip vaccines directly to paediatricians, ship them to paediatricians, during the following weeks so parents and their children can talk to their family doctor about it and get the shot from the provider they trust the most. Easy, fast and free.”

He added that 15,000 pharmacies would also be made available to teenagers to get their jab.

“And if teens are on the move this summer they can get their first shot in one place and get their second shot elsewhere,” he added.

If approved, the vaccine will immediately become available to some 17 million teenagers aged 12 to 15.

The president’s chief medical adviser, Dr Anthony Fauci, has said children will probably need to be vaccinated in order for life to return to normal.

With 75% of American seniors now fully vaccinated, rates of infections have increased in unvaccinated children, a study suggests.

According to the research released on Monday by the American Academy of Pediatrics, children in states that count Covid cases by age now make up around 22.4% of all new infections. That’s up significantly from 3% of new daily cases at this point last year, found the study.

What incentives are being offered?

Mr Biden also said he was speaking to US businesses to announce shopping discounts for vaccinated Americans.

“We’re working with major sports leagues to launch special promotions for their fans. Things like ticket giveaways, in-stadium vaccinations, discounts on merchandise and other creative ways to make it easier and more fun to get vaccinated,” he said.

Mr Biden also pleaded with Americans who are sceptical of the vaccine to get it anyway, for the sake of their community.

“Even if your chance of getting seriously ill [from Covid] is low, why take the risk when you have a safe, free and convenient way to prevent it?” he asked.

Several US companies have already offered rewards for the vaccinated.

Doughnut company Krispy Kreme is offering a free sweet for the rest of the year to anyone who can prove their vaccination.

A cinema in Ohio is offering free popcorn to those who get the vaccine, and some cannabis dispensaries around the country are offering deals to anyone with a vaccination card.

Other major companies are offering time off for employees to get vaccinated. Grocery chain Kroger is offering a $100 (£72) store credit to employees who are vaccinated and car parts company AutoZone is offering $100 to customers who have had their shots.

When will the US reach herd immunity?

It is not clear what is the threshold for herd immunity, which means enough of the population has protection against an infection that it stops being able to spread.

Dr Fauci began by saying the number was around 70% before ratcheting the figure gradually upwards to 90%.

He acknowledged in a New York Times interview in December having moved the goalposts in response to public polling on Americans’ willingness to get a vaccine.

The World Health Organization’s chief scientist, Dr Soumya Swaminathan, has said: “The proportion of the population that must be vaccinated against Covid-19 to begin inducing herd immunity is not known.”