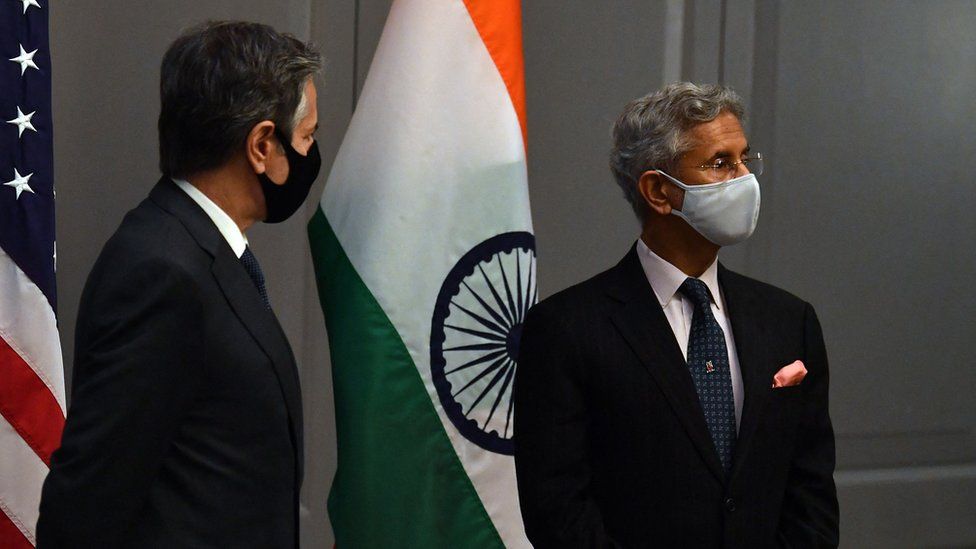 The entire Indian delegation in the UK for G7 talks has been asked to self-isolate by Public Health England.

He met Home Secretary Priti Patel in person on Tuesday, but will now carry out all meetings virtually.

India is not in the G7 group of nations but delegates from the country were invited as guests.

A senior UK diplomat said they “deeply regret” Mr Jaishankar could not attend in person.

“[He] will now attend virtually, but this is exactly why we have put in place strict Covid protocols and daily testing,” the diplomat added.

The G7 group – the world’s seven largest so-called advanced economies – is made up of the UK, Canada, France, Germany, Italy, Japan and the US.

The official summit made up of G7 leaders is taking place in Cornwall next month, but ministers are currently in the UK for talks.

The talks this week are the first face-to-face meetings the G7 powers have had in more than two years.

India, Australia, South Korea and South Africa have been invited as guests as the UK tries to deepen ties with the Indo-Pacific region.

On Tuesday, Home Secretary Ms Patel met Mr Jaishankar and tweeted a picture of them wearing masks as they handled folders, saying it was “a pleasure” to welcome him as new trade and investment deals were signed with India.

It is understood that because strict social distancing was maintained, PHE has decided those in the meetings do not need to self-isolate.

Everyone else attending the G7 talks will continue to be tested daily.

“As a measure of abundant caution and also out of consideration for others, I decided to conduct my engagements in the virtual mode.

“That will be the case with the G7 meeting today as well.”

The meeting on Wednesday is between foreign ministers, who were greeted by Foreign Secretary Dominic Raab with an elbow bump in the courtyard of Lancaster House in London.

They then went to the summit room where the ministers were separated from one another by clear screens in order to minimise any risk from coronavirus.

The talks are expected to discuss new ways to ensure fairer access to vaccine stockpiles and increase support for the global vaccine distribution scheme known as Covax.