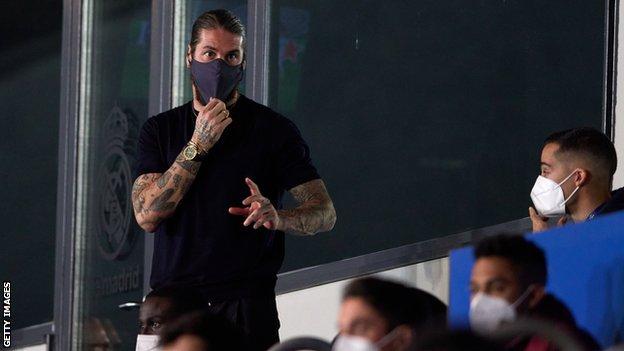 Ramos, 35, has not featured since picking up a calf injury in March.

Real boss Zinedine Zidane said: “We’ve got our leader and our captain with us. I won’t be taking any risks. Sergio is here with us. That means that he’s ready to play, that’s all it means.”

Los Blancos are chasing a 14th Champions League title and their first final appearance since 2018.

For Chelsea, defender Antonio Rudiger is in contention but will have to wear a protective mask.

The centre-back, 28, missed Saturday’s win over Fulham after picking up a late injury in the 1-1 draw in Madrid.

Midfielder Mateo Kovacic has been ruled out with a hamstring injury, but the Blues otherwise have a fully-fit squad as they look to reach their first Champions League final since 2012.

Boss Thomas Tuchel says his players must believe in themselves if they are to beat a Madrid side who are winless in their last four away games against English sides in the Champions League.

“We felt we can be stronger. The challenge is to keep the intensity going through the whole match,” he said.

“It is a semi-final, the pressure is on, a knockout game so to arrive with a level of belief and confidence is necessary or we will have no chance against a team like Real Madrid.

“I never felt we had a holy grail to reach the final, or winning the Champions League is the only target. I have a strong feeling that every win counts, the club demands it that we win any game, no matter who is on the other side of the pitch.”

Chelsea have 15% chance of winning the Champions League

Simon Gleave, head of sports analysis, Nielsen’s Gracenote: “Chelsea are still the underdogs to reach the Champions League final. This is due to a combination of Real Madrid’s higher ranking (fourth as opposed to Chelsea’s ninth) on our Euro Club Index (www.euroclubindex.com) and reduced home advantage for the Blues because of the lack of spectators at Stamford Bridge for the second leg.

Chelsea aiming for first Champions League final since 2012 – the stats