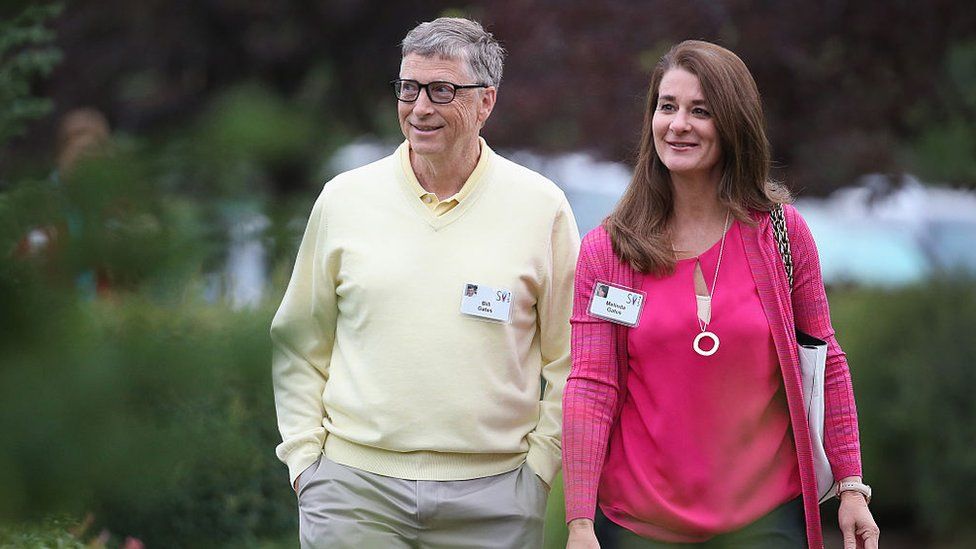 News that billionaires Bill and Melinda Gates are to separate after 27 years of marriage has sparked speculation over what will happen to their charitable foundation.

The Microsoft co-founder is a huge name in the tech world, but he and his wife also play a pivotal role in global health campaigns.

The Bill & Melinda Gates Foundation – the largest private body of its kind – spends billions of dollars every year on initiatives aimed at eradicating infectious diseases and reducing poverty.

How did their foundation start?

The Gates foundation was born in 2000 as a merger of two previous charitable endeavours.

At the time, Bill Gates was considered the richest person in the world.

The couple say they were inspired to do more by a newspaper report about how millions of children died of preventable diseases every year in poorer countries.

They said as new parents, the reports hit hard. They recalled sending the article to Bill’s father with a note saying: “Dad, maybe we can do something about this.”

“Those eight words changed the rest of our lives,” the couple say on their foundation’s website.

Bill gradually distanced himself from Microsoft to focus on the charity’s work. Melinda, in her co-chair position, helped shape the organisation’s direction with a particular interest in empowering women and girls.

What does the foundation do?

Some of its earliest actions included pledges to the Global Fund organisation, which works to eradicate life-threatening diseases such as Malaria and Aids.

The Gates foundation was also a founding partner of Gavi, the Vaccine Alliance, created in 2000 to improve immunisation access in poor countries. It has donated more than $4bn to Gavi, which is currently the key player in distributing Covid vaccines in developing countries.

Improving sanitation has became another of the foundation’s focuses. Bill Gates has done everything from brandishing a jar of poo on stage to drinking water from distilled faeces, in a bid to reduce stigma and showcase technological advances.

The foundation also does work in the US and says it has funded 20,000 university scholarships for high-achieving, low-income students of colour.

Headquartered in Seattle, the foundation has paid $54.8bn in grants to initiatives in 135 international countries.

The endeavour now has more than 1,600 employees in offices around the world – including in Delhi, Beijing and Johannesburg.

Where does it get its money from?

The Gates Foundation is the largest organisation of its kind in the world with an endowment of about $50bn (£36bn) – more than the GDP of some countries.

Another major contributor is US tycoon Warren Buffett, who in 2006 made a lifetime pledge worth more than $30bn to the foundation.

Together with the investor, the couple launched the Giving Pledge campaign in 2010 – encouraging other rich people to donate the majority of their wealth to good causes.

Does everyone agree with its work?

Although the foundation has done good work with its spending across the world, some have raised concerns about the ethics of a private endeavour wielding such great influence.

The foundation is the largest private donor to the World Health Organization (WHO), second only to the US with its annual donation in 2018. Concerns about this became more pointed after former President Donald Trump threatened to pull US funding.

Bill Gates has become a powerful public advocate for science-based medicine during the pandemic. This has shone new light on his involvement in global health and initiatives such as the Coalition for Epidemic Preparedness Innovations.

Will the Gates Foundation continue its work?

In the statement announcing their divorce, the couple said they would “continue our work together at the foundation” in spite of the separation.

A spokesman for the foundation said they would remain co-chairs and trustees.

David Callahan, founder and editor of news website Inside Philanthropy, told the BBC’s World Service that he expected the foundation’s work to carry on.

“This is not some small family foundation that’s going to fall apart because a marriage is falling apart, this is a large, professional institution,” he said.

“They have built this from the ground up, over the last 20 years, they share a deep commitment to it, it’s unlikely that either one of them would be happy to see it not continue to do the work that it does.”