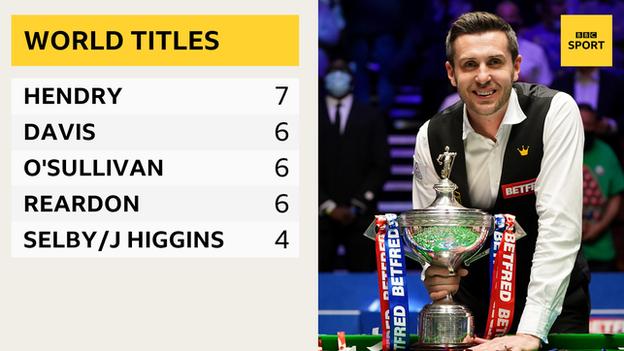 Mark Selby says he will not chase records set by the game’s “all-time greats” after beating Shaun Murphy to win a fourth World Championship.

Selby is now level with John Higgins, and only Stephen Hendry (seven), Ray Reardon, Ronnie O’Sullivan and Steve Davis (all six) have won more world titles in the modern era.

But the 37-year-old says matching their achievements is not an aim.

“I don’t set my goals at any number as far as world titles go,” Selby said.

“I just come to the tournament every year to give my all. If that is good enough, great. If not I will go back home and work even harder.

“I am not going to look at records like Hendry or Ronnie and think ‘he is at six, that’s my aim’ because you can’t predict winning any single tournament, never mind the World Championship.”

The final also marked a significant moment in sport’s return to normality, as a capacity crowd attended a UK sporting event for the first time in more than a year.

The Cheltenham Festival in March 2020 was the last time that happened, just before the coronavirus pandemic took hold and the country was locked down.

As part of a government pilot scheme, 980 fans filled the seats at the Crucible Theatre on Monday, wearing facemasks, adhering to strict guidelines and having taken a Covid-19 test before arrival.

Selby moves up to second in the world behind Judd Trump after securing his 20th major ranking title in Sheffield.

And his tally of nine Triple Crown events – the Masters, and UK and World Championships – places him level with Scotland’s Higgins and behind only Davis, Hendry and O’Sullivan.

“I put those players at the top of the ladder as all-time greats. I would not put myself in that category or class myself as an all-time great,” added Selby, who also won the world title in 2014, 2016 and 2017.

“Other people may talk about it but is not something I can get my head round.”

‘The best all-rounder we have ever seen’

While Selby took a self-deprecating tone, his beaten opponent Murphy has no doubts over his long-time friend’s standing in the game.

“This puts him right up there,” Murphy said. “He has to be in the conversation [around the best ever] based on the number of World Championships we have seen.

“I’ve got him down as the best all-rounder we have ever seen. He is granite in all areas.”

Speaking on BBC Two, Davis said: “Selby has time on his side and could be the one to challenge Hendry’s record. I don’t think he’ll stick on four titles because he’s too good. His all-round game is as good as John Higgins’.”

Fellow pundit and outright Crucible record-holder Hendry added: “Ronnie is still playing to the highest standard at 45 and there’s nothing to say that Mark Selby can’t do the same. He’s a fit lad and someone else I’m going to have to sweat about.”