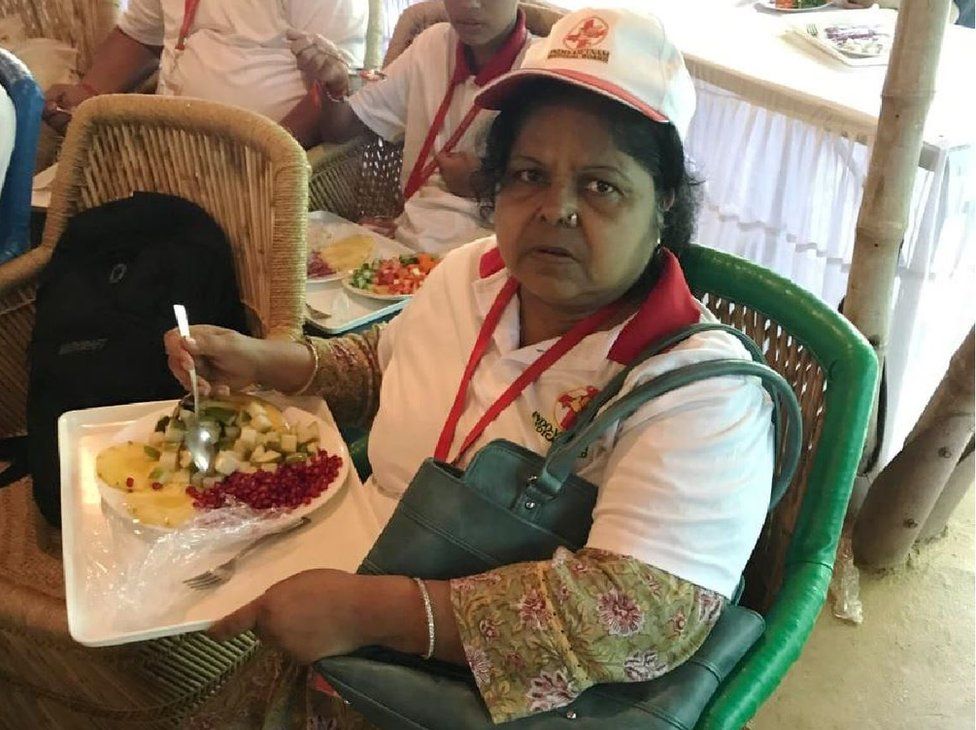 A charismatic anti-vaccination campaigner has gained popularity by claiming that medical science’s approach to the pandemic is entirely wrong. But critics say Biswaroop Roy Chowdhury is endangering lives by falsely claiming he can cure Covid-19 through diet alone, report Ed Main and Reha Kansara.

Biswaroop Roy Chowdhury is not one to hold back.

“According to me, most deaths are not because of coronavirus itself but because of its treatment,” he says in one video on his website.

The Indian social media star – or former social media star, now that he’s banned on several platforms – asserts that conventional medicine is a conspiracy designed to line the pockets of doctors and big business.

“Drugs do not help in curing any illness,” he told the BBC. “I strongly believe that humans do not need vaccines at all.”

In his videos, he claims his diet plans, rich in fruits and vegetables, will cure not only Covid-19, but diabetes and Aids.

Medical science says all of this is nonsense. But Mr Chowdhury has used the pandemic to spread his messages.

He teaches his followers that hospitals increase their chances of dying and says that Covid patients with breathing difficulties would do better sitting in front of a handheld fan than receiving oxygen.

To his many critics, he is a dangerous fraud whose bad advice can only further fuel India’s horrific second wave of coronavirus.

“Biswaroop Roy Chowdhury is a quack,” says Dr Sumaiya Shaikh, science editor of the Indian fact-checking website Alt News. “He has a huge following and that makes him even more dangerous.”

It’s a following that has been cultivated through numerous books, online videos and courses and packed-out live events.

He still has official channels on WhatsApp and Telegram. Biswaroop’s fans are also uploading and spreading his content on proxy accounts.

WhatsApp told us they are working hard to limit the spread of false coronavirus information on their platform. Telegram didn’t respond to a request for comment.

A gift for publicity

Mr Chowdhury presents himself as a plucky underdog figure pitted against a medical establishment intent on deceiving the public.

Covid-19 is “just like normal flu” he asserts – despite the fact it’s actually significantly deadlier. And despite the overwhelming evidence to the contrary, he claims that face masks don’t help stop the spread of virus and will actually make wearers ill.

He has co-opted the Urdu word azaadi, meaning “freedom” – a rallying cry that resonates with many oppressed communities in India, for his slogan “masks se azaadi” (“freedom from masks”).

There is, of course, a vast literature of medical research stretching back decades that documents how vaccines have helped control and even eradicate diseases all over the world. But Mr Chowdhury discounts it entirely.

Mr Chowdhury started developing his controversial diet “cures” about a decade ago.

It’s just one strand of a colourful and varied career. After training as an engineer, he dabbled in Bollywood film-making and even cast himself as the star in one movie.

He is also the chief editor and founder of both the India and Asia Book of Records which is modelled on, but not affiliated with, the Guinness Book of Records.

Nilesh Christopher, a journalist with the tech website Rest of World, says Mr Chowdhury became interested in nutrition when his wife couldn’t shake a flu-like illness.

“What he told me was, he was running around from pillar to post, visiting doctors, and trying to figure out a cure for it, but he couldn’t,” he says. “That is when he goes into this mode of self-learning and he claims to have read research papers and figured out this magic formula which is coconut water, citrus fruits and vegetables.”

The Anti-Vax Files: A new series from BBC Trending, on the World Service weekly from 05:30 GMT Saturday. Download the podcast or listen online

India has a long tradition of Ayurvedic medicine, which uses food and herbal treatments to treat ailments.

But Mr Chowdhury has made a series of outrageous and fantastical claims for the miraculous effects that can supposedly be achieved by patients who follow his advice.

“He is definitely one of the biggest most prominent quacks in India,” says Mr Christopher.

When Covid-19 appeared, Mr Chowdhury quickly declared it an “influenza-like illness” that could be cured by his pre-existing three-step flu diet. He set up a consultation service where patients are charged 500 rupees (£4.80; $6.70) to receive a diet plan.

“He’s built a massive digital empire through online nutrition courses, certification programmes and consultancy services and that’s his business model,” says Mr Christopher. “That doesn’t change, no matter what the disease you throw at him.”

Mr Chowdhury says he has cured more than 50,000 people of Covid-19 without any fatalities. But Dr Arun Gupta, President of the Delhi Medical Council points out that most people will recover from the virus regardless of what they eat.

“If you claim you take 100 patients and I claim that I cure all of you, you see 97 per cent are going to get cured, even without any intervention,” he says.

Dr Gupta says more should be done to stop the spread of such misinformation. “It is the responsibility of the government to take a note of it and make sure these people are contained,” he says.

Mr Chowdhury stands by his methods and rejects allegations that his teachings put people at risk.

“Are they giving any evidence? I don’t think so,” he told the BBC.

However, the nutritionist is under investigation for one specific claim that his methods have caused real life harm.

Jaideep Bihani, from Delhi, has made a criminal complaint against Mr Chowdhury over the death of his mother Shanti in August 2017.

Mr Bihani told the BBC he blamed Mr Chowdhury for her death “100%”.

Mrs Bihani, 56, was suffering from diabetes, and heart and thyroid problems. After discovering Mr Chowdhury on the web, Mr Bihani paid hundreds of dollars to take his mother to a three-day event to learn his diabetes cure.

The event was held at a holistic sanctuary on the outskirts of Delhi. A video of the first evening shows Mr Chowdhury urging his audience to stop taking their medicines.

“I’ve got a box with me, it is called the medical orange box… All the medicines, we will put here and put a lock [on it]. So I hope you will never need those medicines again,” he said.

Mr Chowdhury told the audience that patients who were in very poor health, like Shanti Bihani, would be monitored and given back some medicine if needed – but that food would act as their primary medication going forward.

“The moment you have your first diet, that will make you heart attack proof from that time,” he told the assembly.

Mrs Bihani had been taking a range of medicines, but into the large orange box they went. The next day she complained of feeling drowsy and later collapsed. Eventually she was taken to hospital where she died after suffering a heart attack.

In his criminal complaint, Mr Bihani accuses Mr Chowdhury of falsely claiming to be a medical practitioner, offering fraudulent treatments and failing to provide emergency care at the course. Mr Chowdhury denies all this.

The most prominent qualification listed on Biswaroop’s website is an honorary PHD in diabetes, from Alliance International University, Zambia. It’s an institution that according to its website is headquartered not in Africa but in the Caribbean. This degree appears to be why Mr Chowdhury calls himself a doctor, although he didn’t answer our questions about this issue.

In response to Mr Bihani’s allegations, a spokesperson for Mr Chowdhury told us that Mrs Bihani was a very ill woman who had been chewing paan masala, a mild but addictive stimulant made with areca nut and other substances. Her son denies that she was during the course.

The spokesperson for Mr Chowdhury also said Mr Bihani had his mother’s medications on him throughout the course. But Mr Bihani also denies this was the case.

Mr Bihani said he hoped his experiences should be a warning to anybody thinking of following Mr Chowdhury’s advice.

“Watching my father every day just alone at this age, and watching my kids not being there with grandmum – you know, I can’t even tell you what I feel.”

With reporting from Shruti Menon in Delhi.

Listen to The Anti-Vax Files from BBC Trending, on the World Service. Download the podcast or listen online.