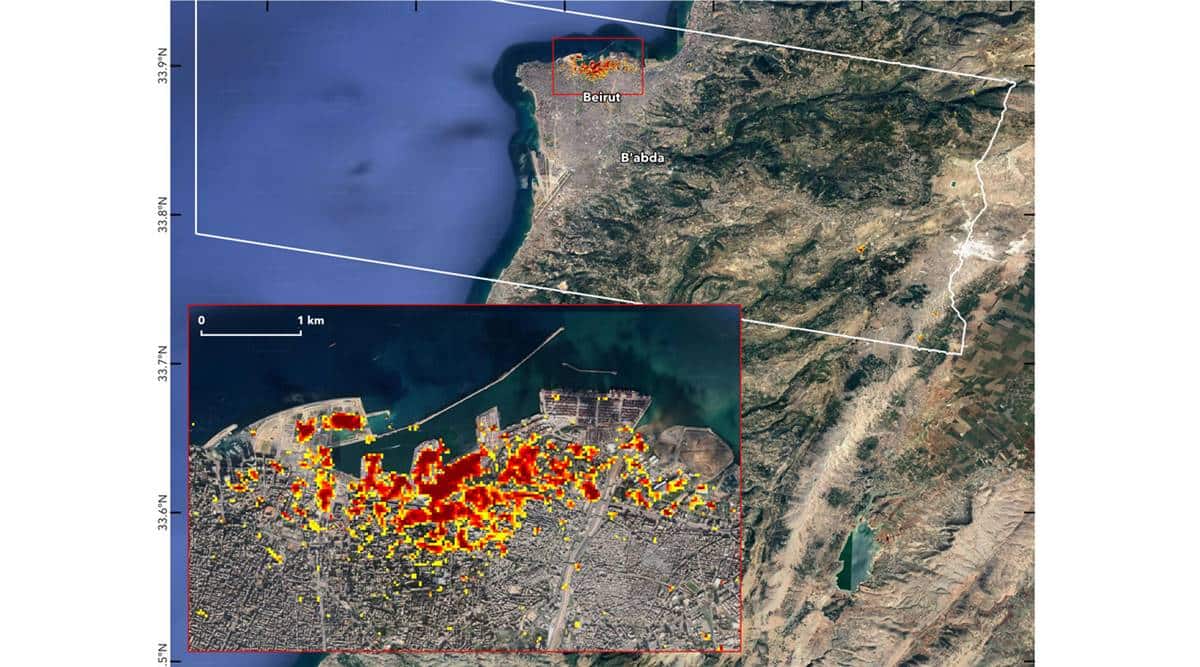 National Aeronautics Space Administration (NASA) has released a map that shows the likely extent of the high scale damage caused by the explosion in Lebanon’s capital city Beirut on August 4 which claimed the lives of more than 170 people.

The satellite-derived aperture radar data collected by the Advanced Rapid Imaging and Analysis (ARIA) team of the American space agency, in collaboration with the Earth Observatory of Singapore, was used to produce the map.

“Maps like this one can help identify badly damaged areas where people may need assistance. The explosion occurred near the city’s port. It claimed more than 150 lives and is estimated to have caused billions of dollars’ worth of damage,” NASA said in a statement.

The clearly visible red pixels on the map represent the area that was near the port of Beirut and faced the brunt of the explosion. Areas that are coloured orange suffered less severe damage whereas the ones in yellow endured lesser damage. Each pixel visible on the map represents 30 meters.

The unfortunate destruction caused by the blast was also captured in several satellite photos. The SkySat imagery also shows the changes on the ground surface from before and after the blast, similar to that of a natural calamity such as earthquakes.

Before and after SkySat imagery shows the impact of yesterday’s explosion in Beirut.

The space technology Maxar based in California also showed the shocking images before and after the blast caused by 2700 tonnes of ammonium nitrate stored for six years in a warehouse in the port.

Before and after images from the #explosion that happened in #Beirut, #Lebanon on August 4, 2020. Before image from June 2020 and after image from today, August 5, 2020. More imagery showing the devastation will follow. pic.twitter.com/dfj4ItyTXL

ALSO READ | Explained: Why has the Beirut explosion caused widespread anger in Lebanon?

According to a few reports, the magnitude of the explosion was so high that its vibrations were felt around 240km away in Cyprus. The videos of blasts shocked the world as they showed the impact of it from a great distance as well. The loud thud of the blast pushed people back, shattered windows and even badly affected the cars that were running on the nearby highway.