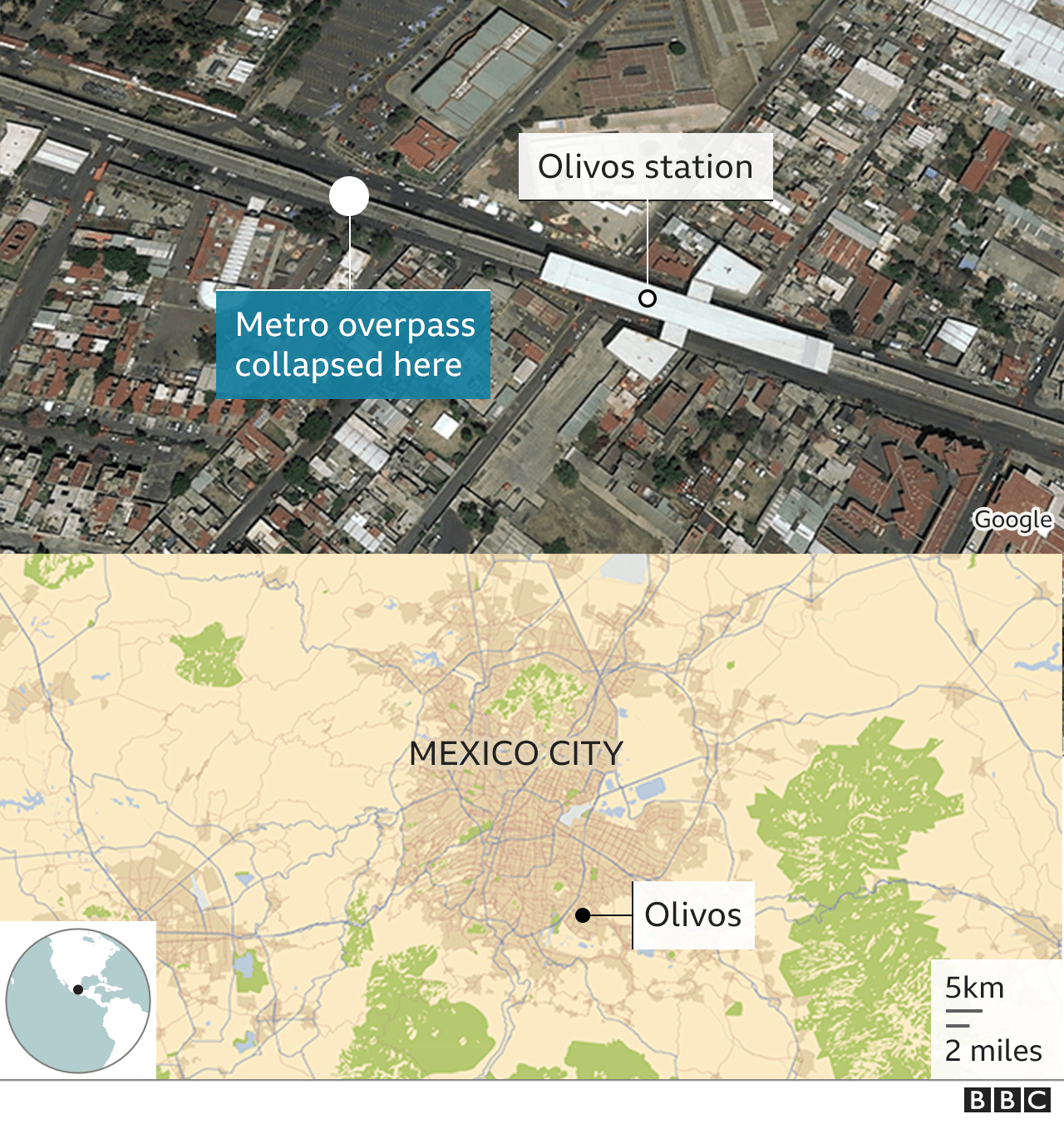 Mexican authorities have promised a full investigation into the collapse of a metro overpass in Mexico City, as questions mount over the line’s safety.

President Andrés Manuel López Obrador said “nothing would be hidden” while the mayor said an external company would be involved in the inquiry.

The elevated track on Line 12 plummeted onto a road killing at least 23 people.

Concerns over possible structural failures have been raised since the line was inaugurated, in 2012.

There have been concerns about design problems and construction standards, as well as allegations of corruption.

At a news conference, President López Obrador said the investigation, to be carried out by federal and Mexico City prosecutors, should be done quickly. “We cannot get into speculation, much less blame the possible perpetrators without having proof,” he said.

The line was built when Foreign Minister Marcelo Ebrard, a close ally of the president, was mayor of the capital. Speaking alongside the president, Mr Ebrard said it was a “very sad day for everyone” and that he was ready to co-operate with the authorities in the investigation.

Current Mayor Claudia Sheinbaum also said it was too soon to say who was responsible for what happened. Earlier, she said it appeared a girder had given way on the overpass. The line will remain closed while a structural survey is carried out.

CCTV footage showed the overpass collapsing as a train was travelling over it, sending up clouds of debris and sparks. The crash happened near the Olivos station, in the south-east of the city, on Monday night.

Fernando Espino, secretary-general of the union representing metro workers, said the incident was related to a construction problem.

“This is a structural failure… We don’t know if it’s related to the material with which this [section] was built. We need to see what happened,” he said, according to El Universal newspaper.

Elevated parts of the line, including the collapsed overpass, had to be closed for multiple repairs in 2014. Residents also reported cracks in the structure after an earthquake in 2017, and transport authorities made repairs following the reports.

In 2017, the then director of the city’s metro, Jorge Gaviño, said the line “was born with endemic problems that would never be solved in its life” and that it would require “permanent” maintenance.

On Tuesday, cranes were deployed to stabilise and remove the two train carriages that remained hanging from the structure.

“We never had much faith in this metro [line],” 62-year-old Maria Concepcion, who heard the collapse from her house, told Reuters news agency.

CCICSA, one of the firms involved in the construction of the line, said in a statement to Reuters it was “going to wait for the official expert opinion”. French train maker Alstom said it was willing to “co-operate with and to aid authorities responsible for investigations in any way necessary”.

At least 79 people were injured, including one person who had been pulled out alive from a car underneath the wreckage. The mayor said the dead included children, but she did not give details.

Mexico City’s metro system is one of the most used in the world, carrying tens of millions of passengers a week. In North America, only New York’s subway carries more people every day.

Yet the incident did not occur on one of the older lines, which have been through at least two major earthquakes in the past 35 years. Rather it happened on Line 12, completed as recently as October 2012.

There will be difficult questions for the mayor’s office to come about the construction of the line, including for several former mayors.

They include Mexican Foreign Minister Marcelo Ebrard, who was in office when Line 12 was unveiled and who championed the metro’s expansion.

This is the deadliest incident in decades for the city’s metro system. In 1975, two underground trains collided, killing 31 people.

Last year, one person was killed and more than 40 injured in a collision between two metro trains elsewhere in Mexico City.