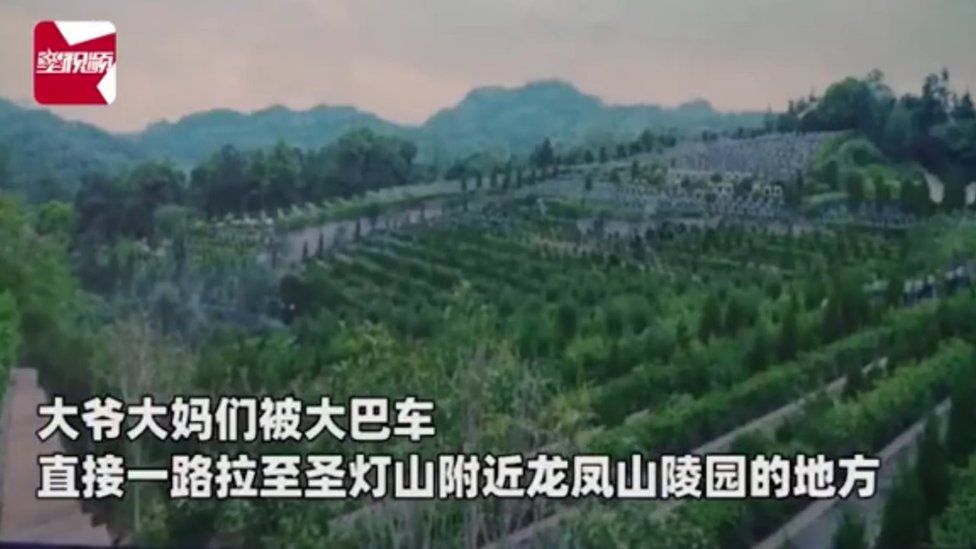 Authorities in China are investigating how a group of elderly tourists were sold a sightseeing tour, only to be taken to a cemetery.

The group paid 18 yuan (£2) for the trip with lunch included but were shocked when they arrived at the cemetery and given a sales pitch.

The local tourism commission said the tour company did not hold the appropriate licence.

The city government has since vowed to crack down on similar behaviour.

A man surnamed Zheng told local media that he was invited on the tour by a travel agency named Longyao.

He told his friends about the offer and they all joined the tour.

Video footage taken on the bus shows the group singing and smiling on their day out.

But when they arrived at the “scenic spot”, it turned out to be a cemetery.

One member of the tour group told local media: “We are tourists, why did you ask us to visit the graveyard?”

Mr Zheng complained about the tour operator to Chongqing’s culture and tourism development committee who have launched an investigation into the incident.

It said that Longyao tour company did not have the appropriate licence to hold the tour and vowed to investigate the case further and fully verify the group’s complaints.

In response, Chongqing city government said it will crack down on any behaviour that violates tourists’ rights and damages the city’s image, the Global Times reports.

It isn’t the first time a travel tour in China has caused controversy. In 2015, a Chinese tour guide had her licence revoked after she was caught on camera berating tourists for not shopping enough.